The Golden Retriever is an exceptionally smart dog, sitting at the 4th smartest dog breed. While they may seem goofy and affable, Golden’s are often used in hunting, as guide dogs, and search and rescue, because of their strong instincts, adaptive intelligence, and intense work ethic.

Golden retrievers are amongst the most beloved fluffy buddies and are famous for being the go-to pooch for a growing family. With so much love (and fur) to give to your home, they make caring, cuddly companions for affectionate owners.

Seriously, what sensible person could resist rubbing Air Bud between the ears when he saunters up and plops his head on your lap?

You might be wondering whether anything is going on inside that head you’re petting. While they’re certainly loving and loyal, are golden retrievers smart?

All scent trails lead to yes: golden retrievers are not only great for snuggling and security, but they have quite powerful cognitive abilities in the ranks of canines. In our 10 Golden Retriever Fun Facts, we mentioned how smart these dogs really are. In fact, along with the German Shepherd, Border Collie, Doberman Pinscher, and Australian Cattle Dog, the Golden Retriever is among the top 10 most intelligent dog breeds. The dog breed sits at number 4, just after the German Shepherd.1

How Do We Know If Dogs Are Actually Intelligent?

We know what you’re thinking: How do we know if any dogs are truly smart? Is someone going around administering canine IQ tests?

They’re not the pen-and-paper, fill-in-the-correct-bubble kind of IQ tests given to humans, but there are scientific methods of discerning a dog’s general temperament and intelligence.

According to Dr. Stanley Coren’s The Intelligence of Dogs, dogs have three types of intelligence. These are:2

Hiding food behind various barriers and timing how long a dog takes to uncover it is one way that researchers measure canine intellect. Studies of this type have found significant variation among the cognitive skills of not only different types of dogs but also individuals within a breed.

This means that, like any animal, dogs vary in their intellectual abilities.

How Do Golden Retrievers Show Their Intellect?

Goldens are considered to be one of the most intelligent dog breeds, and you can see why by taking a look inside that head you’re patting.

Their brains make up a higher percentage of their mass than many other types of dogs. In fact, they have a body-to-brain ratio more akin to humans than any canine counterparts.3

But big brains don’t necessarily make for big thoughts. If they did, every rocket scientist would be sporting a colossal cranium.

And old Goldie can’t tell you what’s going on in her head anyway, whether it’s profound or pointless. There are, however, plenty of ways to observe a golden retriever’s intelligence in action, like:

While more known for their propensity to lovingly beg for food (which should always be of the highest quality) rather than fetch it from the forest, goldens were originally bred as gundogs. They do have retriever in their name, after all, and that retrieving refers to fowl rather than frisbees.

Since about the turn of the 20th century, hunters from the British Isles have prized these pooch pals for their ability to track down birds of all sizes and even small deer. They excel in navigating thick brush and keeping on the trail of anything their marksman companions fire at. Their sharp wit allows them to negotiate the hazards of the forest without losing their line.4

Still masters of the hunt in Britain, America, and beyond today, goldens maintain their sharp senses, even if their usual prey is tennis balls instead of turkeys.

Golden retrievers are one of the most commonly selected breeds for assisting the visually impaired. A guide dog needs to be of the highest intelligence, not only because their jobs are crucially important but also because they deal with so much more than the everyday house dog or hunter.

From a young age, a guide dog is socialized differently than normal puppies and undergoes rigorous training regimens to develop their intellect.5 Guide dogs must be able to analyze potential risks in busy settings and interact with the environment around them, all while keeping their humans safe.

At any given moment, they need to be able to:

To boot, they must do all this while ignoring their natural instincts to smell everything in sight and seek scratches from each passerby. Such lofty responsibility can only be trusted to the sharpest of canines, and that’s why goldens are the pick of the litter.

When someone gets lost in the wild, it’s not only humans who get the call to come to their aid.

Search and Rescue (SAR) dogs help seek out missing and injured people by getting a bead on their scent trails and retracing their steps in rural environments. The Hollywood cliche would have you believe bloodhounds have the SAR market cornered, but several breeds are up to the task.

Goldens, once again, are one of the most called upon to locate lost outdoors people.6

Their hunting history helps them excel at seeking out hikers gone astray and staying on scent trails. SAR dogs must keep a keen focus on the task at hand without succumbing to distractions. Savvy sniffers know how to follow a trail of smells without veering off course to investigate the abundant natural stimuli around them.

We see them at airports, border crossings, and crowded venues alike, sniffing out weapons and illicit substances and keeping us safe.

Golden retrievers are a choice dog breed for detecting bombs and narcotics in busy and vulnerable spaces. It’s a scary job, but someone has to do it! Goldie’s nose is immensely more powerful than a human’s and can be trained to get a whiff of danger even with smelly distractions funking up the surrounding area.

Sniffer dogs are taught from a young age to zero in on specific scents and must be mentally fit enough to ignore competing scents.7 With our security on the line, only the sharpest noses and keenest minds will suffice.

Golden retrievers are the one thing separating our calm, content lives from calamity and chaos. Okay, that may be a bit dramatic for Rover sunbathing in the side yard, but goldies do play a key role in society as detection dogs.

Goldens already shine in the sun and in our hearts, but they enjoy glowing in the limelight as well.

Being such quick learners, they excel at competing alongside trainers in performative events. It isn’t just Air Bud who can be taught to bounce a ball and swing a bat; goldens can learn to perform a plethora of tricks, like:8

Judges at 2020’s Westminster Kennel Club Dog Show were so enamored with Daniel, a golden boy competing in the tournament, that they voted him top of the Sporting Group for the entire show.9 This coveted position only goes to the most cunning of canines, and Daniel retrieves the crown with class.

Goldens love to flex their intellect in the roles we assign them, but the majority of retrievers are members of the family first and foremost. Still, even as backyard buddies, golden retrievers’ intellect helps them to be better companions.

What Does A Smart Dog Mean For Your Family?

Keen canines make for astute and loving members of the family. Dogs with more robust cognitive skills respond quickly to training and comprehend a greater deal of our commands.10

But while we love pooches for their individual personalities and would rather be their buddies than their bosses, they can sometimes benefit from some structure and gentle corrections.

As dogs grow and mature, they need to be taught right and wrong behavior (just like humans). Smart puppies pick up on cues and commands and follow instructions with intent.

As your golden develops, that can mean a few things for you and your family:

Goldens are the cognitively capable companions that bring joy and loving drool to our homes. Bearing such intelligence, however, doesn’t just happen on its own. Goldens are voracious eaters and need proper nutrition to fuel their intellectual development. Always feed them the highest-quality food to support their physical and neurological progression as they age.

Give Goldie The Proper Vitamins And Nutrients With Food From BARK

Just because goldens are super smart doesn’t mean they have discerning palates. Seriously, we’ve seen one chew on a muddy stick for hours.

They’ll eat just about anything, including unhealthy kibble that doesn’t meet their nourishment needs. That means it’s up to us to plop down a bowl loaded with the right nutrients when it comes to mealtime.

BARK food for golden retrievers provides premium nutrition to bolster your best friend’s development. It’s loaded with omega fatty acids and vitamins C and E to build Buddy’s body and brain. Get 25% off with code 25FOOD, plus free shipping!

BARK is made with real ingredients like chicken and brown rice rather than synthesized in a lab from dog-knows-what. Feed Fido the kind of food that you would want to eat if you were a dog. (And honestly, as a human, too. It smells pretty darn appetizing.) 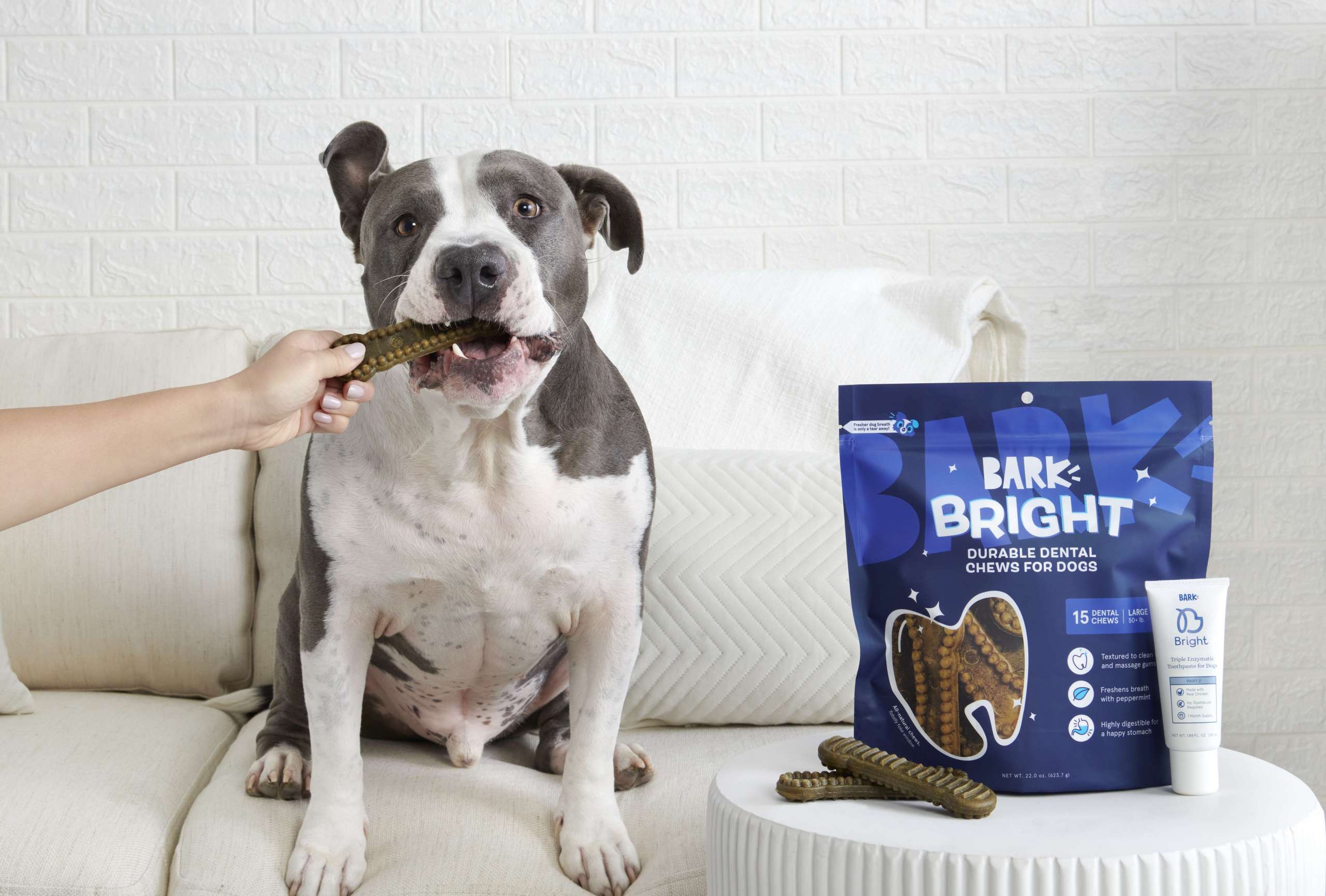