10 Pugs Take Over ‘Good Morning America’… The Result is Adorable.

Soon after 16 Romantic Pugs Helped a Guy Propose in Central Park, the wrinkly cupids became Internet celebrities – with their furry mugs appearing first on The BarkPost, and then on TODAY, BuzzFeed, People Pets, CNN HLN, Dogster, and more.

So, when Good Morning America asked the pugs if they would appear live in studio, the smooshy-faced, media-savvy crew happily obliged.

With the sun still down, the pugs rallied and made their way to the ABC studios in New York City for their 6 a.m. call-time. The promise of muffins and refreshments in the green room made it a little easier.

The pugs were excited to be reunited as many had not seen each other since the proposal. They caught up with each other in the green room while they waited to be called down to the studio.

The furry cupids made their way down to the set, enjoying the elevator ride.

On the set, the Good Morning America props team tied heart-shaped balloons to the puggies, mimicking what they wore during the original proposal.

Once in place, Sarah Haines, a dog-lovin’ GMA anchor, took the reins of all the pugs so they could film some teasers. She encouraged them to “snuggle.”

Then it was showtime! Half the grumble went with the five anchors, and the other half took over the control booth.

“Finn, I want you to give Dan Harris a hug.” – Hamilton Pug, director.

The segment went flawlessly. In fact, some Twitter fans insisted that pugs should be a permanent fixture on the show.

Before they left, the NYC pug crew thanked the cast and crew of Good Morning America for having them on. And the pugs left open an offer to come back, whenever they are needed, for another round of pug love. 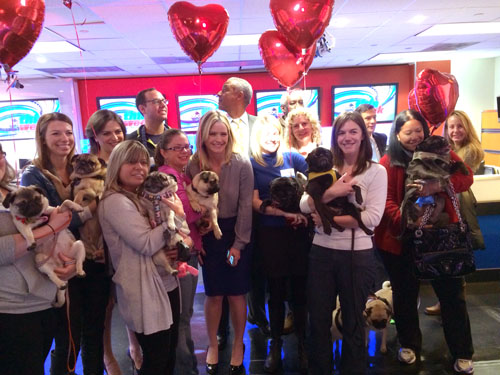 In case you missed their national debut, here are the pugs in action.