The first time I laid eyes on my new Shar Pei pup, I knew I had found my spirit animal. Not in the traditional sense, like we embodied each others’ beings, (though we totally did), but rather that this otherworldly breed of rolls was my canine soulmate. I love a good quirk, and these wrinkly croissants have them in spades.

Us Shar Pei people (Sharpeople) like to say “there’s a little peccadillo tucked inside every wrinkle,”* . My six years with our Shar Pei, Ducky was far too short, but in that time, I came to understand these curious creatures inside and out. As with all breeds, each pooch is different, but here’s what I know:

1. There’s a reason you see their wrinkly mugs all over ads, magazines, and on the cover doggy calendars.

They are the cutest puppies in the world….especially if you like things that straddle the line of devastatingly adorable and completely bizarre looking. They grow up to become equally unique looking adults, too, kind of a manatee-walrus-hippo hybrid with a curly-cue tail. My friend used to call Ducky a “butterface,” and I’ll be the first to admit that he did have a killer bod 😉 So when you try and teach one a new trick, the shade they throw at you will probably make you embarrassed for ever thinking it was cool. With a face like that it’s impossible not to have a sense of humor. Whether it’s a backward butt shuffle, a potentially psychotic aversion to feet, or mooing like a cow, each Shar Pingus comes with their own hilariously unique quirks.

4. They have seriously crazy grills

Shar Peis have blue and black tongues. Let’s start with that. At least once a day, I’d find myself with my entire fist in Ducky’s mouth (at his insistence), and it has to be one of the craziest orifices on earth. His jowls were like two very thick portobello mushrooms, and once inside, you weren’t sure what to make of anything—there were wet parts, dry parts, smooth surfaces, rough patches, and the roof of his mouth was as heavily ridged as a snow tire. If you ever get the chance to explore one of these dogs’ humid caves, do it. Just don’t be surprised by how much you like it.

5. Their table manners could use some work

Because of this thick-lipped hippopotamus mouth, they have a liiiiiittle trouble eating and drinking. About 85% of the water in their bowl ends up on the floor because they use their mouths kind of like a plunger…just kind of go in there and hope for the best.

There will also be plenty dripping from their portobellos, of which they will be completely and adorably unaware. They also inhale their food, not how most dogs do by simply devouring it, but by basically huffing it into their mouths. Ducky would lose pieces of sweet potato in his jowls to be retrieved hours, even days later, often during a nap. And I was always jealous.

6. They have a, shall we say, small manufacturing defect

Next to Alfred Neuman or Dobby, Shar Peis have the most poorly constructed ears on the planet. You couldn’t fit a popcorn kernel in there with a pair of tweezers. Their tight ear canals make them very susceptible to ear infections, which you’ll be able to see and smell coming a mile away. You’ll notice them scratching their ears a lot, and shaking their heads. The best thing to do to prevent these incidents is clean their ears with a cleaning solution about once a week, making sure not to add to any inflammation. 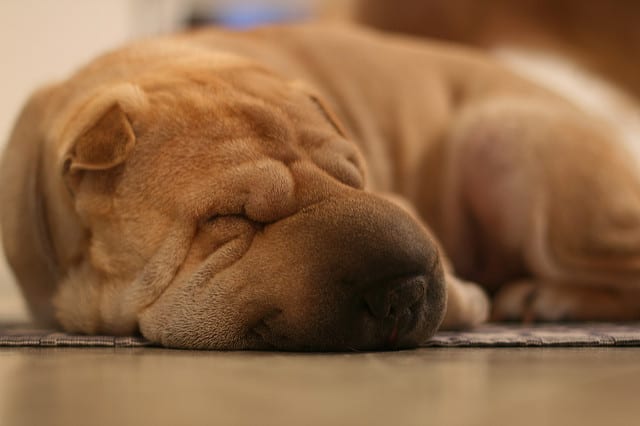 Shar Peis like to keep themselves and their living quarters quite clean. Ducky basically potty trained himself. He’d judge my husband for spitting in the sink and I swear he’d look at me differently when I had mustard stains on my shirt.

Shar Pei’s originally hail from China. In 1966 to 1976, during China’s Cultural Revolution, Shar Pei’s were seen as symbol of the bourgeois, and sadly, almost went extinct. A Chinese business man named Matgo Law is credited for being the reason the breed wasn’t eradicated completely. In 1973, Law wrote to the editor of a popular dog magazine in America explaining the Shar Pei plight. He eclosed pictures of his own Shar Peis and asked oversea dog lovers to help him save the breed. Most Americans had never seen a Shar Pei, but when they did – it was love at first sight. Law smuggled around 200 Shar Peis into America, and by 1979 the breed was so popular in America, a Shar Pei puppy graced the cover of LIFE magazine. 9. They’re the most loyal friends you’ll ever have

Most Shar Peis aren’t lap dogs, but they are incredibly loving and fiercely loyal in their own way. They’re also very protective of their families, especially the kids. Ducky would instinctively “guard” every baby he met. In our building elevator, he’d position himself between the stroller and the door, creating a roadblock of sorts to oncoming passengers, and then usher the child out to the lobby. They’re incredibly gentle creatures with huge hearts. I like to think of them as “old souls.”