2-Year-Old Pit Mix Weighed Just 11 Lbs. When She Was Rescued

In mid-April, Rescue Dogs Rock NYC, a non-profit whose goal is “to focus on the rescue of…urgent animals and provide them immediately the routine, emergency or specialized medical care they need and deserve,” came across a photo of a cinnamon-colored Pit Bull mix who was at the Animal Care Centers of NYC (NYC ACC). In the photo of this two-year-old dog, who was named Bubbles by Rescue Dogs Rock NYC, the immediate need for medical attention was incredibly clear. She was so severely emaciated that her knees knocked together, her paws were wider than her spindle-thin legs and her ears sat large and floppy as if she was a puppy who hasn’t fully grown into her features.

[W]e were shocked and horrified as we always are when we see abuse cases like this. [Y]ou’d think it would get easier, but it never does.

Perhaps the worst part of Bubbles’ physical condition is the fact that upon intake, she weighed a mere 11 pounds, at least three times less than what a healthy dog of her age and size should weigh. According to a post on Rescue Dogs Rock NYC’s Facebook page, the notes from the NYC ACC stated that Bubbles was, among other things, dehydrated, anemic, emaciated, malnourished, infested with worms, and had low blood pressure.

With Bubbles’ clearly imperiled condition, she was pulled by Rescue Dogs Rock, who immediately transferred her to their veterinary partner, Faithful Friends Animal Hospital, to be given life-saving treatment. On the body condition scale of 1 – 9, it was determined that Bubbles was a 1, the lowest possible score a dog can have while still being alive.

In some tragic cases, medical care for abused and neglected animals comes too late. However, on April 23rd, Rescue Dogs Rock NYC posted an encouraging update on Bubbles to their Facebook page:

[Bubbles] is in the process of having diagnostic testing done, plus a full blood panel and medical work up. Due to her severe emaciated state [and] her significant dehydration she is on an IV 24/7. She also has gashes and cuts all over her body indicating some type of abuse. In that same update, there was another note of good news for Bubbles as she weighed in at 13 pounds, two pounds up from her shelter intake weight. As of the morning of April 27th, Bubbles is up to 16 pounds. An incredibly sweet and heartwarming video of Bubbles with volunteers of Rescue Dogs Rock NYC was also posted to Facebook this past Saturday. From the beginning of the video, Bubbles’ propensity for affection is on full display as she burrows her head into the chest of a volunteer only to be followed by a signature Pibble trademark of doling out kisses.

Jackie echoes what we see in the video, telling BarkPost:

[Bubbles] is incredibly sweet and just wants love and affection. Dogs tend to be very forgiving. Any little amount of attention or care [and] they are so happy. She gets in your lap and just wants to give kisses.

Now, just one week after her rescue, Bubbles has gained over 5 pounds, is no longer dehydrated, has left the Faithful Friends Animal Hospital, and is living in a loving foster home while her adoption applications are finalized. As Rescue Dogs Rock NYC put it in a recent Facebook post, it’s only because of the generous support they receive from their followers that they can do this sort of thing – that they can save dogs like Bubbles who were in desperate need of medical attention. 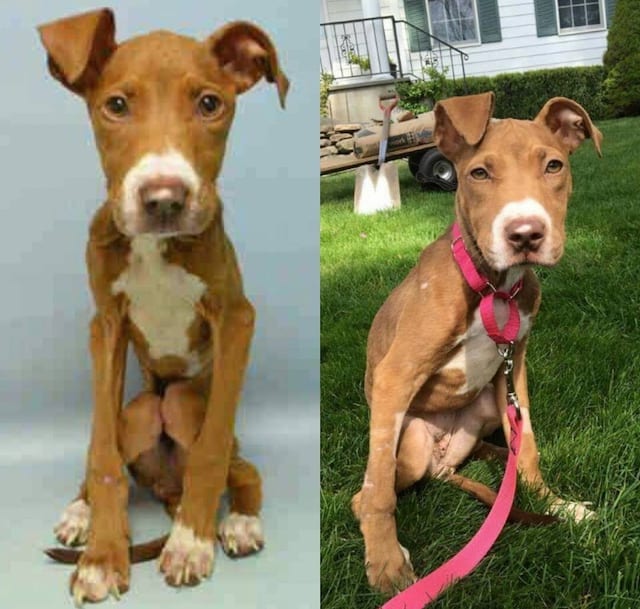 Bubbles before (left) after (right) rescue

Despite the deplorable condition of Bubbles when she was found, Rescue Dogs Rock NYC continues to be in awe of Bubbles and other dogs like her.

While we are saddened to see a 2-year-old dog in such horrific and heartbreaking shape, we are honored to be part of her journey and bring her back to health. No matter how many dogs we see like her, we are always amazed at their resilience, will to live and ability to forgive humans. If you can, please consider donating to Rescue Dogs Rock NYC so they can save more dogs in need like Bubbles. And if you’re interested in providing a home for this sweet girl, you can apply to adopt here.