On Thursday, March 10th, my husband and I left our home at 5:30am. We drove 3 hours to Chatham, Ontario to be a part of another peaceful protest in support of the 21 dogs seized by the OSPCA from a suspected dogfighting ring who now await possible euthanasia. Previously, we had attended 2 protests in Newmarket, outside the OSPCA’s headquarters there, but this was the first time we were taking a road trip for a protest outside of a courthouse (you can read more about this case and our previous protests here).

This is a case close to our hearts. Our family has never known Pit Bulls to be anything but loving and loyal family dogs. Since I first became involved in advocacy for this case, I have had many sleepless nights thinking about these 21 dogs labeled “Pit Bull-type dogs” (they have yet to be confirmed as Pit Bulls outside the OSPCA), who have been incarcerated in cages for over 6 months now. I am haunted by images of these dogs in isolation, behind bars, living without any loving human contact, no attempted rehabilitation, having already suffered at the hands of humans who forced them to fight.  I shudder to think how these dogs must feel. And I am absolutely sickened by the OSPCA’s opinion that not a single one of them can be rehabilitated. I don’t buy that for a heartbeat.

We gathered outside the Chatham courthouse around 9am with about 40 other advocates, demanding a second chance for these dogs. We all held our protest signs, marching in front of the courthouse and stopping to chat with local media and Member of Provincial Parliament (MPP) Rick Nicholls who made the trip from Toronto to show his support in this case against the OSPCA. We had hoped to walk away from the courthouse that day with good news. Our biggest fear was that the OSPCA would be granted their request, to euthanize these dogs. However, they had no such victory. Sadly, the dogs had no victory that day either, as the case was adjourned until Monday, April 18th.

Part of the OSPCA’s argument has been that since the accused in this case still “own” the dogs, they are unable to take any action. This is their repeated response when any agency (and there have been several, both within Ontario and outside of Canada) offers their assistance to rehabilitate these dogs. Why the OSPCA has decided to petition the court to euthanize the dogs as their only course of action is something that no one but the OSCPA understands. At Thursday’s hearing for the OSPCA, lawyers representing four animal rights groups (Bullies in Need, who have formally filed a motion of intervention, Dog Tales, Animal Alliance of Canada and Animal Justice) attended the court with the future intention to intervene. 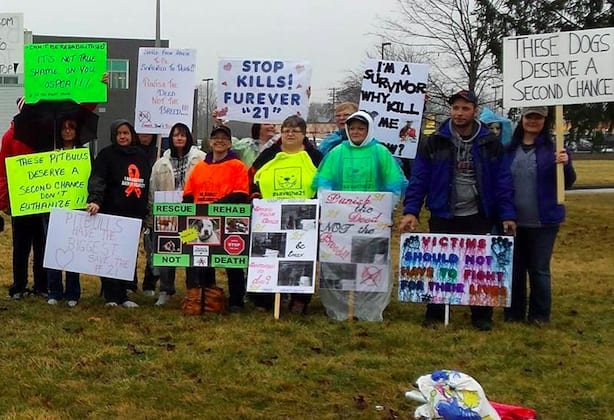 Dog Tales, an animal sanctuary in King City, Ontario, is offering rehabilitation for these dogs and to house them at their sanctuary for as long as they live. Both Dog Tales and Bullies in Need informed the court that they have statements granting them ownership of the dogs from the accused, and this was confirmed by a representative for the lawyer for the accused. However, these statements could not be confirmed to the satisfaction of the court. The lawyer for Bullies in Need pushed hard to get this motion through, but the chief counsel for the accused was in another court case elsewhere and therefore could not confirm the transfer of ownership of the dogs. Also, the Crown was not interested in hearing these motions and objected to any interventions from any of the animal rights groups. The Judge adjourned the case until April 18th, at which time we are hoping for a decision in favour of any of the proposed interventions.

Since my first peaceful protest in this case, back in early February, this case has built significant momentum in the media, with coverage ranging from small-town news agencies to nation-wide networks, as well as online through social media. The signatures on several circulating petitions have increased by the thousands and three MPPs have spoken up in the House of Commons in support of these dogs. Those discussions, thus far, have just gone in circles and received no true response.

Breed Specific Legislation (BSL) laws in Ontario make this a complicated case. Ontario is the only place in Canada where a province-wide ban on “Pit Bull-type dogs” exists, hence the increasingly popular tag-line “Ontario is the Pits.” To me and my family, this has become an embarrassing place to live when it comes to the laws against our animals. In light of the province’s ban, only a pound can take in these dogs. In a statement from the lawyer representing Dog Tales, it was suggested that the sanctuary is applying for pound designation as a means to help these dogs. A representative for Dog Tales told me that they will do “whatever we possibly can to save them.” There is a tragic story in “Beyond the Myth: A Documentary About Pit Bulls” in which a family’s Pit Bull is taken away from them and kept locked up by an animal agency while their case goes before the courts. Their dog spends weeks in a cage and every time the family visits, they notice that the dog they once knew is slowly slipping away, becoming increasingly depressed and non-responsive. The family makes the agonizing decision to euthanize their own dog, a beloved family member, in order to save him from any further suffering, as the case is delayed repeatedly. After all of the stories I have heard over my years of advocacy, this one stills stands out and comes to mind often as I work on this case.

We cannot allow these 21 dogs to die as punishment for a life forced upon them by human hands. They are innocent victims and their lives matter. Many advocates like to reference the Michael Vick case when defending the possibility of rehabilitation for these dogs. When I first spoke to a reporter about my feelings on this case, she told me that the OSPCA denies this, stating that all cases are different. I explained to her that of the 51 Pit Bulls that were rescued from that unimaginable horror, 48 were fit for rehabilitation and many of those dogs went on to live lives as members of families, some with young children, and four have even been certified as therapy dogs. There have never been any reports of aggression from those dogs who were adopted.

I understand that not all rescued and rehabilitated dogs can live with children, and some of them cannot live in a home at all and remain at rescues and sanctuaries for the rest of their lives. But there is absolutely no way that I will believe that if 48 dogs who endured a true hell on Earth can be rehabilitated, that these 21 cannot and need to die instead.

At this point, we can only wait and see what transpires in court on Monday, April 18th. To me, the greatest tragedy in this case would be if these dogs were robbed of the opportunity to become loving members of society and/or a family and never given the chance to be a best friend to someone, as only dogs can. 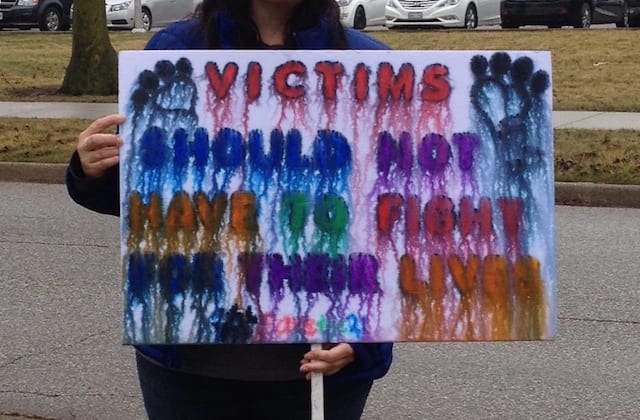 As we stood waiting to hear what was taking place inside the courthouse, it started to pour with rain. The colourful ink on my protest sign, which read “Victims Should Not Have to Fight for Their Lives,” began to smudge and was soon running down the bristol board. My husband said, “Your sign is crying.” I believe it was.