Most of us have been there at some point in our lives; on that quest to find the perfect job. It used to be that we’d go through the classifieds in the newspaper, but the internet has simplified the process a bit. Even so, there are still some commonalities in the experience. One sees a job advertisement that sounds interesting, reads the description and then gets to the part where he realizes that he is massively unqualified for said position.

I’ll give a real-world example from my own life. I was 23 years old, unhappy in the retail job I was working at the time and looking for something with a little pizzazz. I found an ad in the paper, called to say that I was indeed interested, only to have the woman on the other end of the phone explain to me in great detail the myriad of reasons why I was not qualified to be a contestant in the Miss Teen U.S.A. competition.

Well, reflecting upon these experiences got me thinking about my dog. There are all kinds of dogs out there every day working hard in various capacities and I realized that there are so many jobs that, even if she wanted them, she is just massively unqualified for. And, there are some jobs that people do that she might just be perfect for.

We’ll start the list with one of the most popular dog jobs.

Ah, the coveted position of assistance animal. I have a feeling that this is the holy grail of dog jobs. It has it all! Discipline, nobility, and an awesome wardrobe. Nothing screams importance to other dogs like a vest that says, “I don’t have time for your petting, human, I am working.” 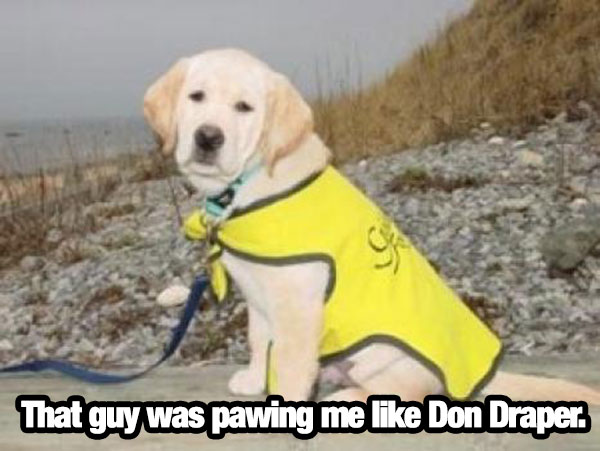 What makes this position even more envious to other dogs is the fact that they get to go places non-assistance dogs can’t. Just think about it. That poor dog that sits outside the Sizzler on “All You Can Eat Bacon Night” must be in awe of the dog that struts right on in with its human.

This is a pleasure my dog, Priscilla, will never never know.

But it is not her fault! Priscilla is a Golden Retriever, which along with Labradors and German Shepards are the more popular breeds for seeing eye dogs, so she definitely meets the requirements of pedigree.

It really comes down mostly to training, and what training it is! Dogs can begin their training at seven weeks (sometimes sooner), being taught some of the essential skills of their service life like getting used to wearing a harness, and then being desensitized to sights and sounds that they would run across in public interactions. Add to this being taught to recognize things like curbs and high obstacles that their master could hit their head on. All of this training usually goes on until puppies are 12 to 15 months old, at which point they will get a little more training before finally being placed with their master.

And some of these assistance animals really go above and beyond, taking their profession to a whole new level. Everything from turning on and off light switches to retrieving items for their owners (sometimes even from the fridge!).

Now, I’m not saying that my Priscilla is dumb, she is just the dog equivalent of a young Luke Skywalker arriving on Dagobah – she lacks the training. All it would take is one squirrel for her to make the evening news headline of “Seeing eye dog walks owner into heavy traffic.” Dog-Yoda would not be pleased. 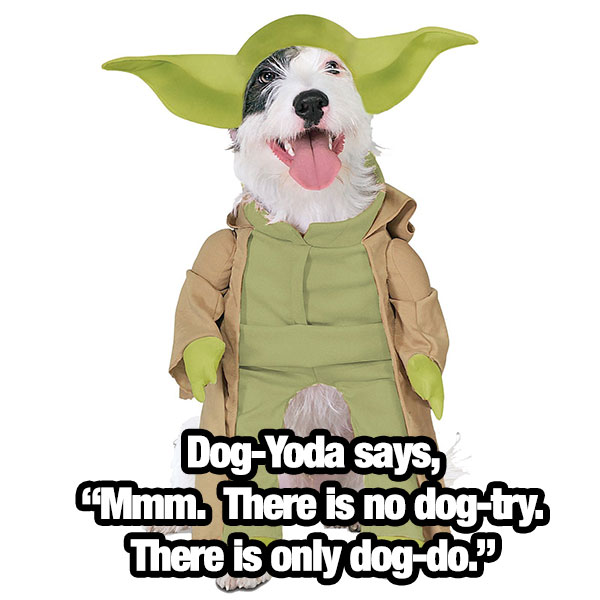 This is another one of those dog jobs with a wow-factor. My dog’s mornings consist of wake-up, short walk, eat breakfast, ponder life, then back to sleep. How she must envy the sniffer dogs! They get up, have their coffee, fetch (and probably read) the paper, then, when their masters leave for work, they get to go with them! Add in the wardrobe factor with cool logo emblazoned upon it and you’ve got a job that screams, “You may sniff butt but I sniff butt for contraband!” These are the dogs that are always picking up the lady dogs at the dog park. 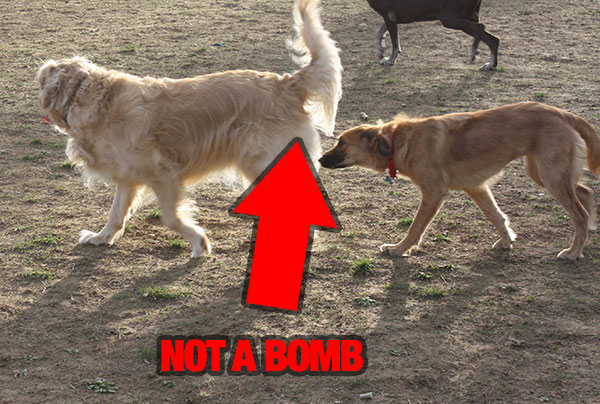 Now, this might not be Priscilla’s goal as she is a lady dog (but maybe it is! I don’t judge!), but you’d think that she would already meet most of the requirements for this position. I mean, she is a dog and she has a nose, so she can sniff. You’d be wrong.

Sniffer dogs don’t need to be taught how to sniff, they need to be taught what to smell for and where to smell for it. If you are anything like me (and if you are, I can recommend a great psychoanalyst), the mere sight of a sniffer dog brings joy to your heart. When returning from Jamaica with my wife recently, we saw a little beagle and his handler walking around the baggage claim area. He went from suitcase to suitcase, just sniffing away. I wished that I had brought something illegal back just so the two of them would take me to a dark room to be interrogated. I found while researching this article that the dogs don’t take part in the questioning, so this would have been a really bad idea. Anyhow, these dogs are taught to sniff along bag seams and zippers and other areas where scents are more accessible.

There a few factors that determine a good sniffer dog. One is the desire to please humans coupled with a tireless work ethic. Some dogs like German Shephards tend do this for a “play reward”, working all day just to get the satisfaction of a favorite toy or tennis ball. Others, like Labs, are in for the “food reward.”

Now, while Golden Retrievers are the best smellers of them all, this reward system is where they lack. In an article in the Smithsonian Magazine on this very topic, MSA Director of Canine Training Mike Wynn says that goldens are “… so intelligent that if they don’t want to do something, they just don’t do it.” Well, that explains a lot.

Regardless of the motivation, this really does come down once again to training, and like a dog-Neo being taught dog-Kung Fu by dog-Morpheus in the dog-matrix, my little girl lacks that training. Unfortunately for her, she can’t just plug in and learn how to do it, so it sounds likes an exciting career in the world of professional sniffing is not in the cards for her. 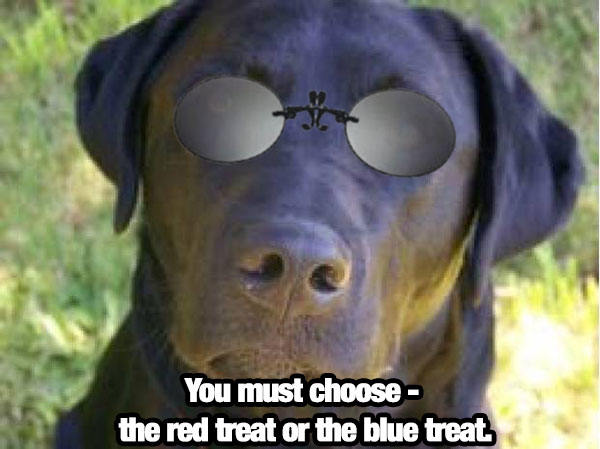 So, here is the scenario. I go out for dinner with my wife one night, followed perhaps by some after dinner entertainment like Karaoke or a movie, and then return home. When we do get home, we are greeted by our lovely Priscilla, who, as usual is all wags and hops and is just happy to see us. Upon entering the house, we see that our television, other electronics, and my wife’s jewelry are all missing. Priscilla explains that some very nice people came into the house and borrowed them while we were away but it is okay because they pet her and even let her out to pee. We explain to Priscilla that she is the worst guard dog ever. With that, she understands that she will never get a cool spiked collar or have her image displayed on a “Beware of Dog” sign. 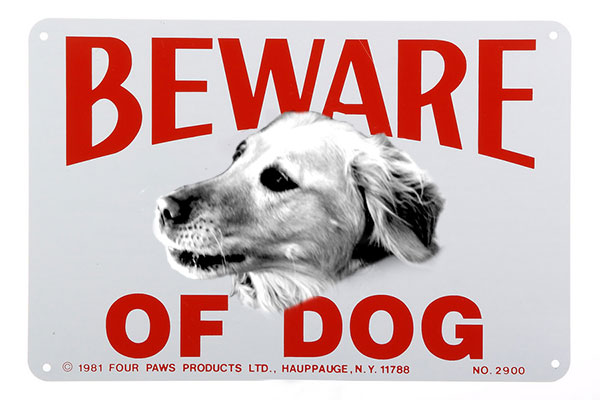 But what makes a good guard dog? Movies and television tend to depict them as snarling, chomping, growling balls of fury, but this is not the case. In fact, nothing could be further from the truth. The best guard dogs experience heavy, positive and frequent socialization. And this is where the training comes in yet again. The best guard dogs start young, anywhere from 6 weeks to 16 weeks old. They need to know what normal situations are first and foremost and then are taught how to recognize a threat so that they can shift into attack or guard mode. Moreover, they need to be able to accept commands and shift out of that mode when the master tells them so. After years of training and working, some dogs are able to recognize threats on their own, but that all important factor of command reaction must still be there.

Breed temperament is another factor, and this is one where the deck is stacked against Priscilla. Goldens are by their very nature so people friendly that the most aggressive behavior that one can normally expect is a bark, and, in Priscilla’s case, that bark normally translates to, “Hello, person I have never met before! I am so very happy to see you!” A Bullmastiff, on the other hand, makes one of the best guard dogs and, while extremely family friendly, will use its size to overwhelm a threat or simply block its path.

If she were on the all dog version of “The Apprentice” and was trying to be Dognald Trump’s bodyguard, the end result would be inevitable. 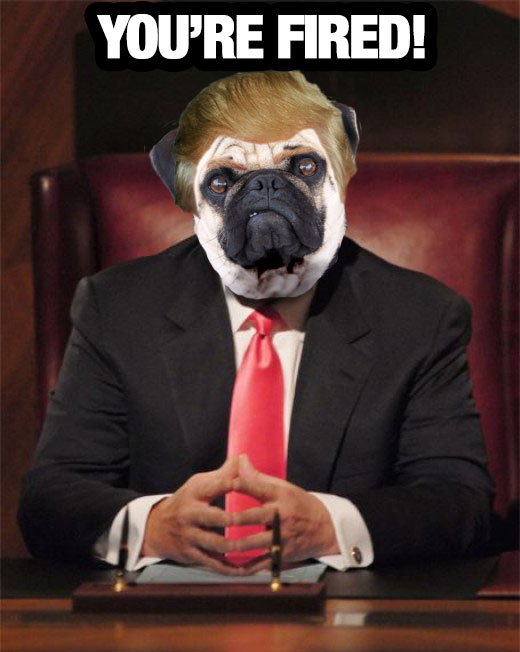 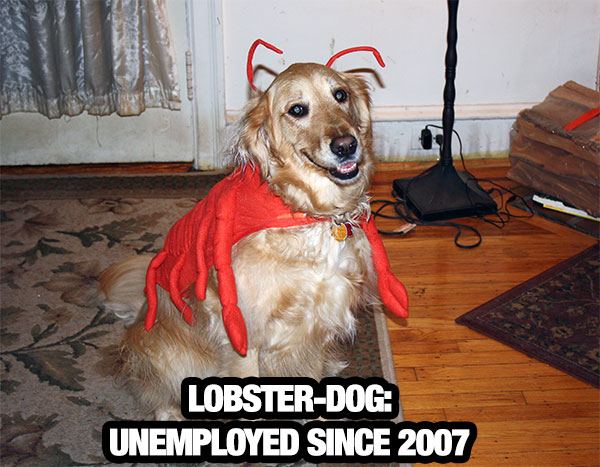 But surely there must be a few jobs that she CAN do! And if not in the world of canines, perhaps then in the world of humans. Well, after careful consideration of her strengths and natural tendencies, I have found three jobs she is just made for.

Now, when I suggested to Priscilla that she would make an awesome dog for a stakeout, she showed a level of unbridled enthusiasm that I wasn’t expecting. It was then that I realized that she thought I meant “steak,” so we sat and had a long talk.

If there is one thing that this dog is good at, it is staring out a window for long stretches of time looking for suspicious activity. She does it at home and she most definitely does it in the car. Add to this her proclivity for being an excellent companion and you now have every police detective’s best friend. 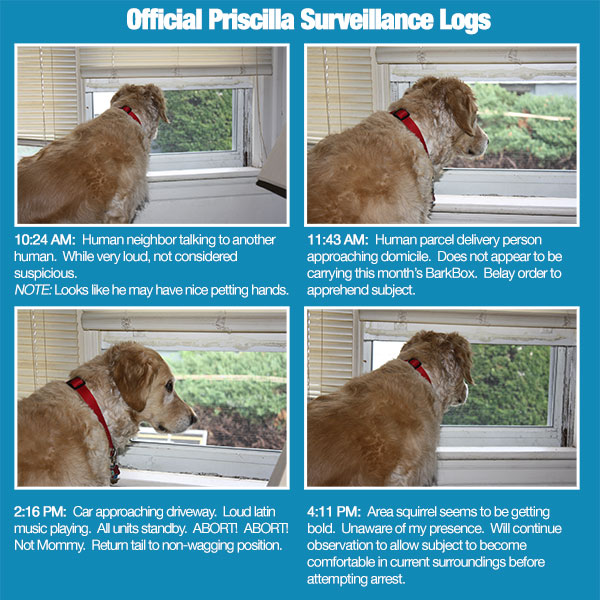 This one is almost a no-brainer. Look at the job requirements. Love of people? Check. Enthusiastic greeting technique? Check. Ability to say, “Welcome to Wal-Mart.” Well, not quite, but her “Woo woo” comes pretty close. Add to this that she can sport one of those vests and I think we have the perfect greeter here. 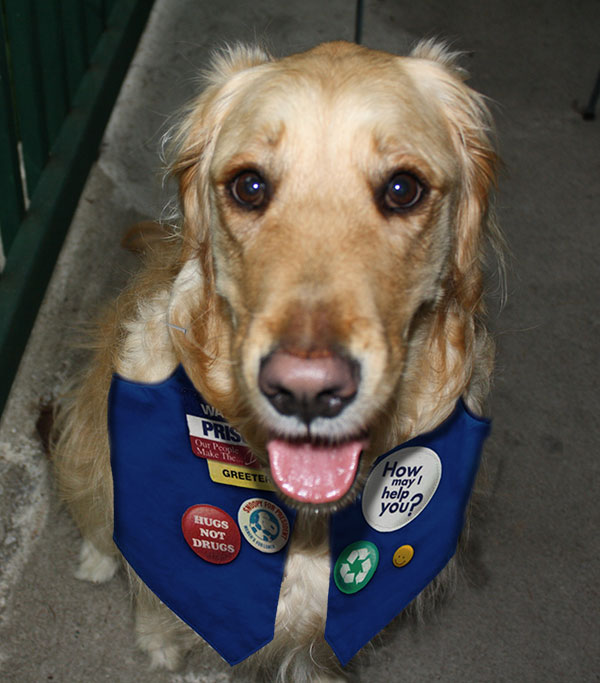 This dog can do nothing like nobody I’ve ever met. And talk about being able to cross party lines! She has been known to consort with cats! Cats, I say! In the upcoming elections, vote Priscilla. 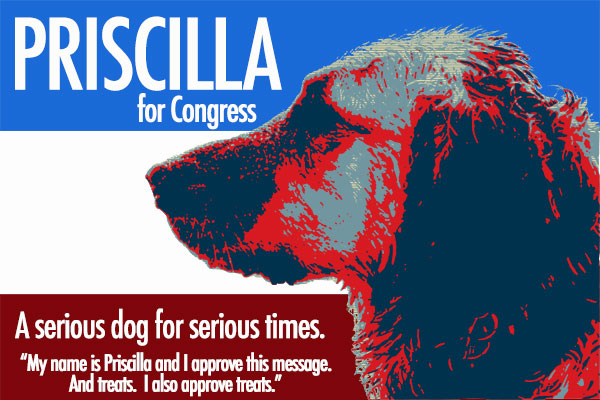