I love TV and movies and I am not ashamed to admit it.  I can do marathon viewing sessions like, well, someone who is very good at watching a lot of TV and movies.  I also love dogs, and I am of the opinion that there is almost nothing that is not made better by the addition of a pup or two.  Long car ride? Bring a dog!  Cold night in bed?  Bring a dog!  Depressing funeral?  Bring a dog!  Okay.  Maybe not the funeral (although it is stipulated in my will that my services will be dog friendly).

Which brings me to my point here – take any good movie or TV show and add a dog and it has the potential to be great.  Do the same with an already great piece of entertainment and it can become mind-shatteringly awesome.  Roland Emmerich, producer of such popcorn schmaltz as Independence Day and The Day After Tomorrow, knows this well – dogs have big scenes in both of these movies.

In the world of television, there are numerous examples of this theory in action.  The first season of Person of Interest was great by any standards.  The story was compelling, the characters were interesting and the concept was just a little bit ahead of its time.  But, in the second season, a new character was introduced – Bear, the dog.  And, Bear had and still has a very active role in the series.  He steals every scene he is in.  He proves the point that I illustrate in the handy info graphic below; add a dog to make your entertainment awesome. 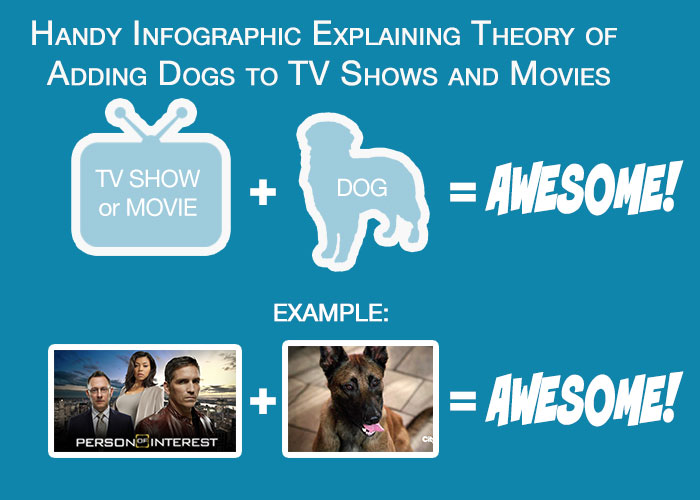 One final bit of proof of this theory – love it or hate it, the very last living creature we see on the series finale of LOST is Vincent, the dog.  Take that, stupid island! 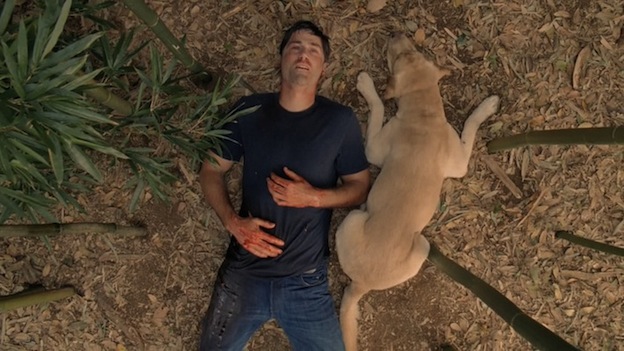 With this in mind, I have compiled a list of movies and television shows that I already love and figured I’d apply my theory to.   Submitted for your approval, dear reader, is my first selection.

My wife recently turned me on to this show.  It follows the Behavorial Analysis Unit of the FBI as they hunt and attempt to capture (but usually kill, which makes me think that knee shots should be taught better in FBI training) serial killers from week to week.  It’s got the by the books team leader, the nerdy facts guy, the abrasive hacker, the tough guy agent and the rest.  But do you know what they don’t have and could really use?  If you guessed a dog, then you have been reading this post thus far.  And what a valuable team member Agent Barks would be!  Serial killer hiding somewhere?  Put Agent Barks on the trail!  Need to subdue a suspect WITHOUT killing him?  Sounds like a job for Agent Barks!  Sure, they would have to modify their jet so he could stick his head out the window while they are on the way to their next case, but it seems like a small price to pay for his invaluable contribution to the team dynamic. 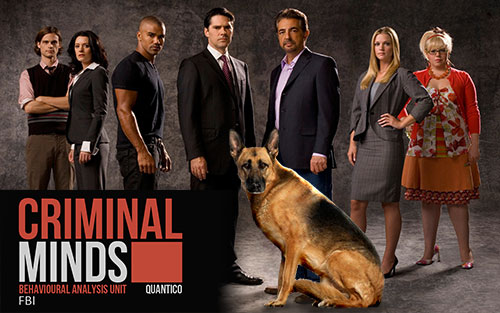 Moving into the realm of film, I give you one of the most talked about movies of all time.  SPOILER ALERT:  I see dead people… all the time.

That’s right!  Who wasn’t surprised by that ending (that is, if your idiot friends didn’t sit around at work and talk about it before you had a chance to see it.  Thanks, idiot friends!)?  But, that poor kid.  Such a burden to have such a gift.  And poor Bruce Willis!  Oh, the film is tragic in so many ways.

But do you know what would have made it an even better movie?  Yepperooni!  A dog!  That depressed kid needed a pooch pal.  Little Haley Joel Osment and his faithful companion, Sniffers, hanging out with dead people.  And, since most of the movie is spent walking from one dead person to the next, that would have been one happy hound!  Sure, I would have still felt like, “Oh, poor dead Bruce Willis,” at the end, but then I’d have felt like, “Oh, that dog sure was cute.”  Yep.  Pure movie gold here. 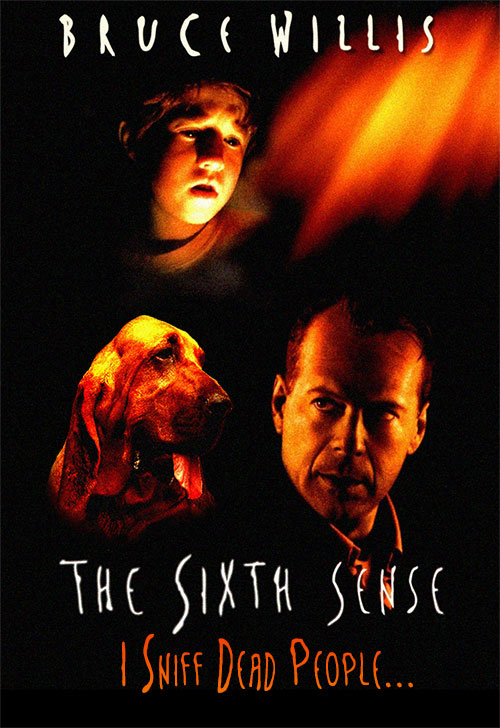 As long as we are exploring the realm of the paranormal, it seems only appropriate that, as we return to the world of television, we revisit the FBI as well for another series that deserves my attention.

I loved this show.  Watching as Mulder and Scully searched for the truth about UFOs and other weird stuff made me wish I was a conspiracy theorist.  But I want to believe that there is something that could have made this even better, season after season.  You want to know what it is?  No, not a dog.  It is… no, wait.  It is a dog.

Poor Mulder, spending all of that time in his little basement office, alone and ostracized.  If ever there were someone that needed a canine companion, it is he.  I give you Special Agent Horatio Hound, and this dog really wants to believe.  The addition of this character would have brought this show to levels of awesomeness of Scooby-Doo potential.  Plus, think of the spinoff possibility!  Fox and the Hound, following Mulder and Horatio after they leave the FBI.  It basically writes itself. 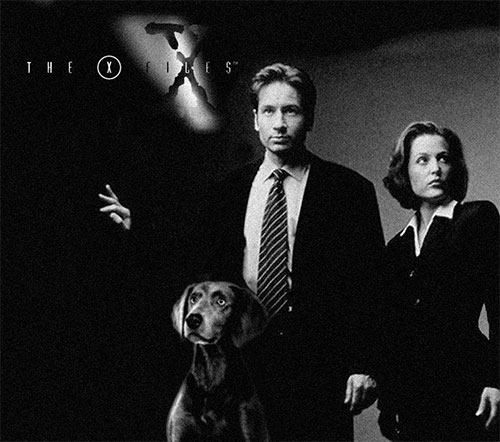 Now, we’ve seen superhero movies get rebooted, re-rebooted, and, in some cases, re-re-rebooted in recent years.  But, in all of these, I feel that major opportunities have been missed.  With that, I give you…

Poor Batman.  When you think about it, his story is really tragic, if you skip over the being a billionaire living in an awesome mansion part.  He witnesses his parents’ murder as a young boy and then goes off to live in the aforementioned mansion being raised by his butler and thirsting for revenge.

Well, I can tell you that nothing quenches my thirst for revenge like a nice, cool, tall glass of puppy.  And, all of those training montages would have been so much better with the addition of Bat-Dog. 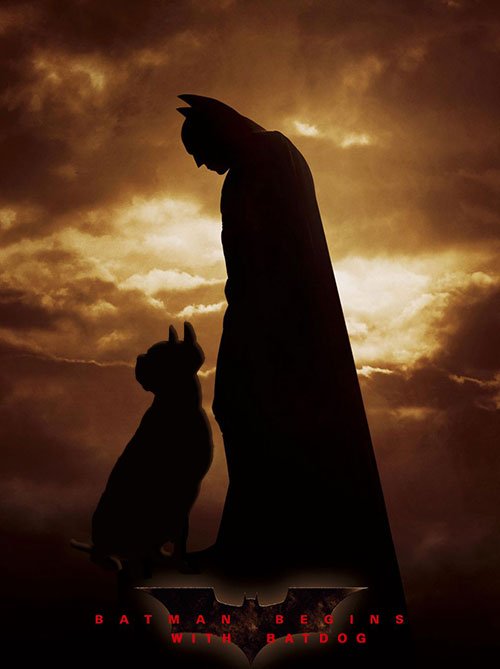 Oh, Bat-Man, how I wish that I could have told you the benefits of dog ownership!  Especially for you!  Those long, lonely nights, on the prowl through the streets of Gotham would be perfect for you and Bat-Dog!  And, since you basically growl most of the time, communication would not have been an issue.  Those roomy seats of the Bat-Mobile just beg for Bat-Dog road trips.  And don’t even get me started about Cat-Woman.  He’d have sniffed her out as trouble from the get go.  Pun intended, thank you.

To top it all off, to play the part of Bat-Dog I’d cast Ben Affleck’s dog.  What? Too soon? 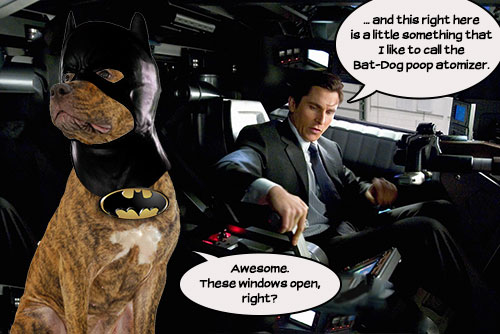 Oh, Gregory House, you pill-popping fool!  How ever do you solve these cases from week to week,  you and your carefully selected team, each with their own way of seeing things wrong so that you can see things right?  And, while your bromance with Wilson did fill a certain void in your life, I am still writing you a prescription for pooch.

Meet Royston Tamblin-Luckinbill (a British dog that barks quite convincingly with an American accent), your new canine companion AND coworker!  After a tragic day at the dog park, Royston was injured and must always wear his dog recovery collar.  Sure, his aches and pains make him a little snippy sometimes, but he really has a heart of gold.  Add to that his ability to sniff out cancer and other illnesses, and you have a match made in heaven.  I’m not sure what you officially call a dog bromance, but I call it awesome! 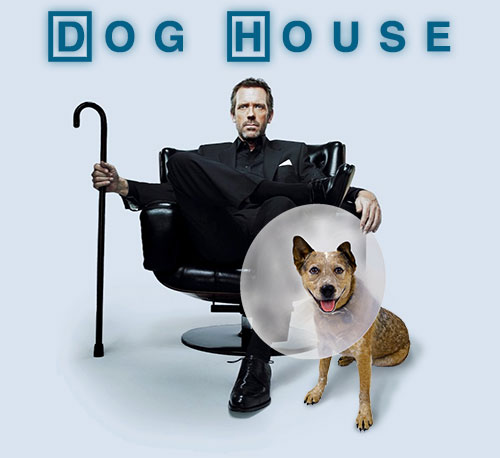 Staying in television and on the topic of tragic characters, this next show is almost too awesome to change. Almost.

Poor Walter White.  If ever someone needed a puppy, it is this guy.  Please, someone!  Puppy up that guy!

I give you Curie, the Saint Bernard.  She is so cute!  Just what a dying drug king needs to lift his spirits!  Los Polos Hermanos was life-threatening to you, Mr. White, and we all know that chicken bones present a choking hazard for dogs.  All the more reason to take out that mean Mr. Fring.

And, it works so well from the view of a cinematographer.  Think about it.   Picture the scene.  Walt visits Jesse.  They argue.  The Roomba enters the room.  Curie chases the Roomba.  Tension broken.

One thing, though.  What would Jesse call her?  Hmmm…. 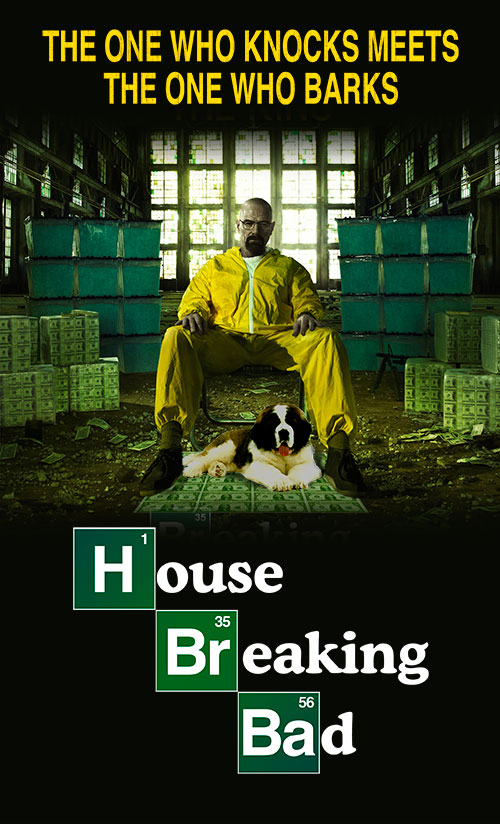 Yes, there certainly are characters that need the help of man’s best friend.  Which brings me to another of my favorite TV series.

What can I say?  I cannot see a digital clock anymore without hearing that “Beep, Boop, Beep, Boop” sound now.  Don’t lie.  You just heard it, too.  While this series was famous for bringing up issues of torture, I feel like it is torture to NOT have a dog on this show.

I give you, Bowser, best friend to Jack Bauer and CTU Field Agent extraordinaire.  Yes, this dog may have a fierce exterior, but he has a fierce sense of loyalty to match.  More than anything, Jack Bauer needed a companion that was as dedicated and trustworthy as he was, and Bowser fits that bill quite nicely, thank you very much.  And, honestly, I could have very easily watched Jack take a break once in a while to take Bowser on a walk.  I can hear Jack now.  “Dammit, Bowser!  I forgot a poop bag!”

Best of all?  The addition of Bowser means that mountain lions are no longer an issue. 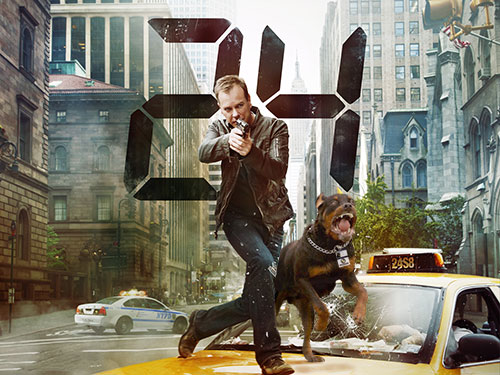 Finally, I dare say that I have saved the best and perhaps most obvious for last.  Who doesn’t like a good love story?  And who doesn’t like an Academy Award winning cast?  Cat people, that’s who (I mean that literally, not as a movie reference).

The Bridges of Madison County

Oh, where to start with this one.  This movie seems to have it all.  Meryl Streep at her peak?  Check.  The rugged good looks of Clint Eastwood?  Check again.  Beautiful set pieces and scenery?  Yet another check. A timeless tale of love found and love lost.  Oh, it gets buckets of checks on that one.  But, a dog to share in the whole experience?  No?  Well, let’s rectify that mistake now. 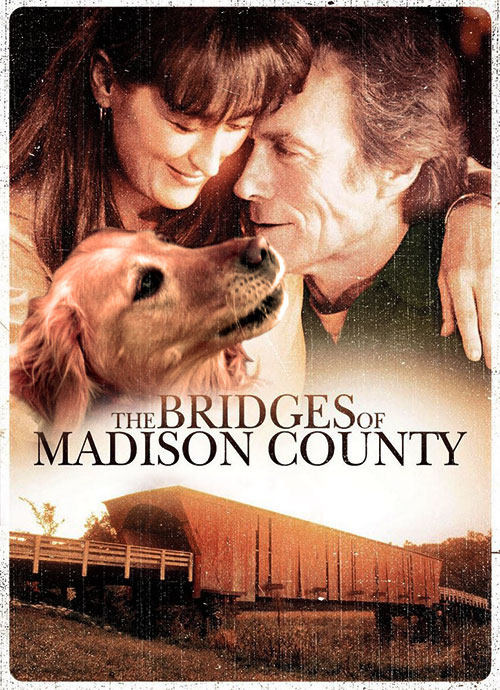 This movie is practically made for a dog!  Every single thing that Clint and Meryl do in this movie is an activity that a dog would love!  I introduce my own dog for this one, Priscilla the golden retriever. Sitting on a front porch on a hot summer day?  Woof!  Sitting out at night under the starry midwestern sky?  Woof!  Road trips in a pick up truck?  Woof!  Picnics in sunny fields? Double woof!  Passionate love-making?  Well, no.  But snuggling afterwards?  Woof!  And stopping for some photos on a picturesque bridge?  Well, if this tail is a waggin’, you’d best be a-snappin! 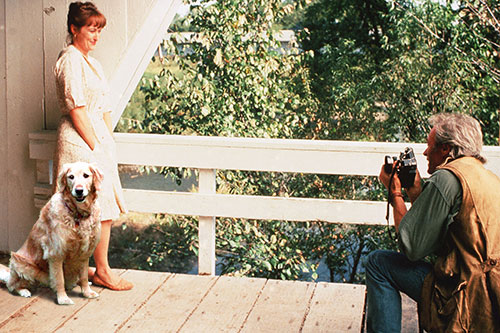 Best of all, there is no sad ending!  Clint leaves and Meryl and Priscilla, while sad, sit on the porch and share a nice sandwich.  Fade to black and roll those credits with a smile.  Plus, this could finally lead to an Oscar nod for “Dog in a Supporting Role.”  Make it happen, Hollywood.

In the future, I want to see if this theory applies to the world of theater.  Dog thespians?  Oh yeah (although I can’t see Hamlet getting past Act 5 Scene 1).  There is something, something very deep in my heart, that yearns see an all dog production of Cats.