When I first met with the BarkBox founders, Henrik, Carly and Matt, we decided to work on a dog-saving project together. They gave me a challenge, “How could we take $10,000 and make sure this money made a big difference in the lives of dogs in need?” We had a bunch of ideas, but  couldn’t decide on a single project.

I suggested we asked the dog-loving community, “How would you spend $10,000 and make a big difference?” We took the top ideas and let our Facebook community vote. The winner was HeARTs Speak, who proposed a project that would not only train volunteers and staff to take fabulous photos, but also how to better promote the animals all the way around. The project included training shelters, providing them with a great camera, backdrops, lighting, photo editing software – everything they needed to get these dogs noticed with great photos! We were thrilled to fund this project.

A few month’s later, HeARTs Speak held their own contest and let the community vote on the shelters that needed this prize the most. Sitting here in Chinatown in Manhattan, I watched our own city’s Animal Care and Control shelter rack up the votes and win! I was so excited to see this prize being put to use right here in NYC.

Jump ahead to August – I heard from a rescue organizer we work with, about a sweet boxer mix who had been abused, neglected and been living in a cat carrier for months, he was currently on the list to be euthanized at the ACC (Animal Care and Control). She took me, for the first time, behind the scenes at the ACC.

We took Troy, the neglected boxer, to an area I have seen thousands of times in photos – an outdoor area with benches and pens. I sat with tears in my eyes as I watched volunteers and staff taking photos and videos of dogs that were to be euthanized the next day. Troy sat next to me with his dramatic overbite and big brown eyes – he tried to walk but instead fumbled around, his legs were weak from months of inactivity and being malnourished. I told the organizer I was taking him home.

Two weeks later I was in the same spot – only this time watching six professional photographers work with about a dozen volunteers and staff, all working together to get the right lighting, composition, and emotion out of a dog in need. His name was Bruno. He had a big block head, and a smile that was even bigger – one of my favorite kind of dogs! He was stocky, brindle, happy, goofy and loving. The staff at the shelter said he was in danger and needed help getting out of there. 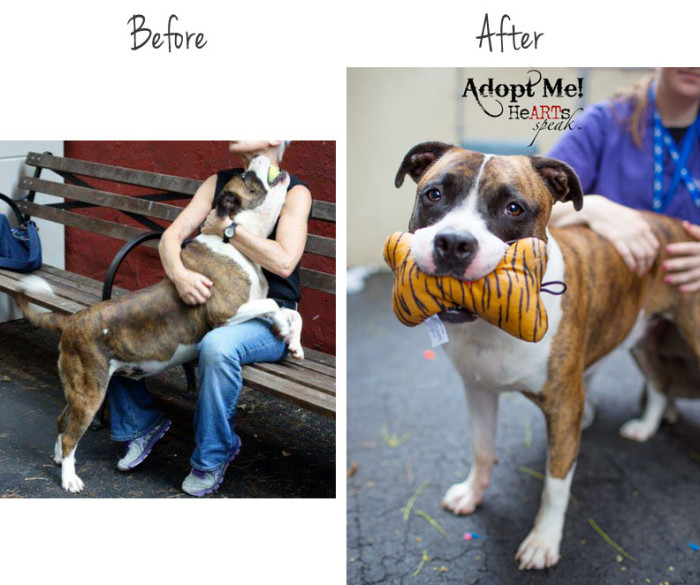 The volunteers and staff were full of excitement and questions! They had the attention of six professional photographers who had been working with rescue animals for years. The energy in that space was so different from the last time I was there. My eyes were full of tears again – these dogs would have an even better chance of getting out. The other part of this that I didn’t expect – I watched the volunteers, so grateful and inspired, I could imagine them using these skills on hundreds of dogs in need in the years to come. This was definitely the best use of our $10,000. I am so glad we let the community decide for us. 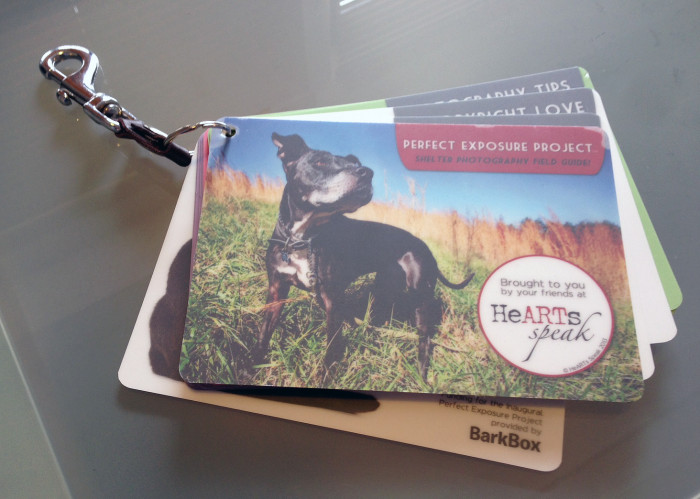 HeARTs Speak also put together a thorough and helpful “field guide” to be kept by the shelter team to reference for years to come!

The next week, sitting at home with Troy snuggled next to me, I opened an email from Lisa from HeARTs Speak, she told me the session was an amazing success and they were going to Philadelphia next! And, “Oh yeah!”, she couldn’t leave the shelter without Bruno. She took him home with her where he got along with her and her chickens, goats, horses, other dogs and children and he is now in a loving foster home in Stockbridge, Massachusetts until he finds a permanent adopter. 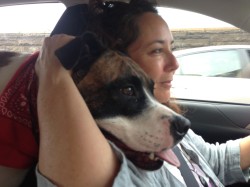 “He’s amazing… 3 year old American Bulldog (my guess) and not a mean bone in his body. He’s bordering on doofy, but kind as anything. He loves kids, and is just a rolly polly mush.” 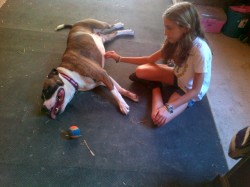 That’s who we do this for: Bruno, a dog full of love, kind to all creatures, always wearing a big smile. A perfect dog, that just happened to find himself in a shelter, waiting for someone to save him. All the other Bruno’s that end up in the ACC shelter now have a team of staff and volunteers that have the tools to show the world how loving, gentle and doofy they are. We can’t wait to see how this makes a difference!

Oh, and Troy – now Eugene – is doing very well! He’s gained nearly 10 pounds, is bounding up and down stairs and chasing pigeons on the street. We start water therapy to get his legs even stronger soon!