In July of 2015, a Pit Bull mix named Alvin became one of the first cases taken on by the joint efforts of the ASPCA and the New York City Police Department. The two organizations teamed up the previous year in response to the ever-growing number of abused and neglected animals in the area.

Alvin was discovered living in filth with three other dogs and a cat in the Bronx. He was so weak from malnutrition that he could hardly stand on his own. His bones protruded jaggedly against his dull skin and he was fearful of humans. Alvin received a month of veterinary care at the ASPCA Animal Hospital before transferring to the Canine Annex for Recovery and Enrichment (or CARE). The state-of-the-art facility was built to house the influx of pets rescued by the ASPCA/NYPD.  CARE is not only unique for its exceptional layout, designed specifically for abused animals, but also for it’s immersive approach to rehabilitating animals with deep-rooted emotional and behavioral issues. 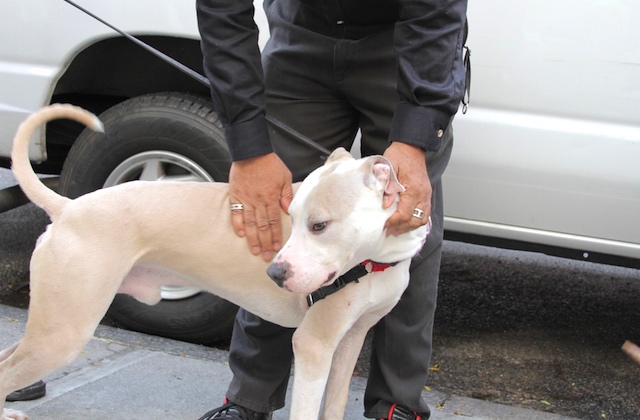 The moment Alvin walked into CARE, his therapy began. He was introduced to the team of expert animal behaviorists and assessed. At first, Alvin’s fear caused him to bark at strangers when they approached, but in time he began to respond to treats and encouragement from the staff. They dressed in odd costumes in order to desensitize Alvin to the variety of humans he would meet on the streets once adopted. Soon he was wagging his tail and even “kissing” the behaviorists when they entered the room. In just four short months, Alvin went from skeletal, fearful and unable to walk to healthy, happy and ready for adoption! In November, a Bronx resident identified as Patricia C. spotted Alvin at the ASPCA. She was instantly drawn to Alvin and adopted him shortly after meeting him. Alvin loves to cuddle and sleep in bed with his adoptive mom. Thanks to the behavioral therapy he received at CARE, he is even able to enjoy the dog park without fear. Patricia told the ASPCA:

He is a very special pup. We adopted Alvin because we needed love just as much as Alvin needed love – and we just adore him! If not for the combined efforts of the ASPCA, the NYPD, and CARE, Alvin’s story would likely have had a far different ending. An average shelter does not have the funding to treat medical issues as extensive as Alvin’s, let alone to professionally address his fearful behavior. Being a Pit Bull type dog his chances of adoption would already have been impaired. Chances are, Alvin would have put to sleep. The center gives its animals a chance to enjoy life as a dog, maybe for the first time, and we know that in the case of Alvin, life as a dog is finally something worth living.

Bershadker told the NY Times that dogs like Alvin have been “betrayed by humanity” before they arrive at CARE and that “they’ve never really been dogs—never chased a ball, never had their tummies rubbed.”

No dog’s life should end before it ever has a chance to begin. Thank you to the dedicated folks who helped Alvin experience love and heal enough to be able to give it in return.

Featured image and H/T via ASPCA

All other photos taken by BarkPost managing editor Lisa Bernier