Home » Fun » Dog Noses Look Like Angry Extraterrestrials. But Why?

If you have ever been abducted by beings from another world (that you can recall), you already know that dog noses look like angry aliens. For those humans who have been taken and… probed, this resemblance can be highly disturbing. However, when explored scientifically, it becomes clear that a dog’s nose is nothing to fear. But there’s no denying… When a victim of alien abduction looks at a dog’s nose and feels ozone-scented terror, what they’re actually seeing is the dog’s rhinarium. That’s the wet bit at the end of a dog’s nose. Rather than being the face of extra-solar horror, the rhinarium serves a valuable purpose in your dog’s sensory perception: the cold, moist bit that prods you awake in the morning (stirring awful memories) functions to help capture the particles of scents, and many experts suspect that it too can smell objects directly. Your pooch’s nose is sensitive, insanely so. A bloodhound can track a fugitive for miles, and your Corgi can tell when you’ve been seeing Dave from Accounting on the down-low, because their nose is packed (PACKED!) with smell receptors. These receptors are similar to the ones in your nose, except there are way more of them. Think 100 million more. Far out, right? But these little receptors need air, and lots of it, to work. To take advantage of his crazy-sensitive nose (and correspondingly sensitive smell-brain), your pup needs the air to be full of particles (that’s where the smell comes from), and those particles need to be moving around for the best effect.

That’s why the rhinarium is shaped like an angry alien: as the inlet and outlet for air, it needs to allow for lots of air to enter quickly, lots of air to exit quickly without keeping more air from coming in, and it needs to begin the process of introducing turbulence to the air to help smell stuff. … can come from this: Once past the rhinarium and through the nostrils, air passing through a dog’s nose is made even more turbulent by complex structures called–you guessed it: turbinate bones! We’d show you a picture, but they’re super-gross. Turbinate bones, which happen to look like the interior of an organic faster-than-light spaceship (pure coincidence), are shaped in a way that causes a smooth stream of air to turn into a vortex of currents. Particles in the air build up on the surfaces created by these bony bits, allowing a dog’s nose to get a stronger and stronger scent with more sniffs. But inhaling is only half the battle. Since dogs don’t have access to liquid breathing tanks full of perfluorocarbon (used by aliens for high-G acceleration), they have to exhale the air they breathe in when sniffing, like every other Earth-bound mammal. Here’s the neat trick though: they can exhale while still inhaling fresh air. And you thought Kenny G was special!

Those little slits at the bottom of a dog’s nostrils shoot the exhaled air out. The swirl of air leaving the nose makes it even easier for your mutt to detect new smells with the next inhale. By sniffing without pause for almost a minute, your pooch can detect incredibly faint odors. Like the smell of phosphorous that inexplicably covered your clothes upon your return to Earth. 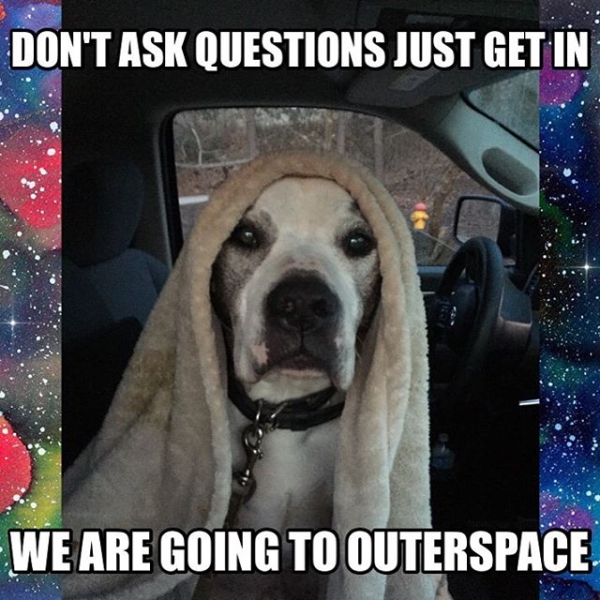 Your dog’s nose may evoke memories of your too-close-encounter of the worst kind, but it’s all in your head. Just like the chip. While your abductors hailed from off world, the morphology of your pup’s nose has entirely terrestrial causes. You can sleep easy again knowing that Mr. Snuffles is a prodigiously talented sniffer, not a profoundly malevolent spy.