Do Baboons Keep Dogs As Pets?

The only thing people love more than dogs being adorable is dogs being adorable with other animals. How many videos featuring interspecies friendship have become viral sensations? There’s the Labrador Retriever who’s best buds with an elephant, there’s the Dachshund who loves a disabled lion – and vice versa – like a brother, and there’s the Bull Mastiff momma dog who adopted a baby chimpanzee, which just makes me want to cry my eyeballs out it’s so adorable.

So it almost goes without saying that it’s not unheard of for different species to intermingle in human homes or captivity. It’s not even unheard of for one species to take another as a pet. We all remember Koko the gorilla and her love of cats.

But what about outside of captivity? Are there known instances of animals in the wild taking other animals (specifically, dogs) as pets?

A few years back, a video started making the rounds on the Internet – taken from a British series titled Animals Like Us – that seemed to answer that question with an emphatic yes. Check it out below:

WARNING: The first part of this video may be difficult to watch for some people!

The clip, which was filmed in a garbage dump near Ta’if, Saudi Arabia, depicts a male baboon dragging a puppy away from its den as it screams for its mother. As gut-wrenching as the beginning of the video is, it becomes extremely interesting at about the 1:47 mark. We’re led to believe that the distressed black puppy has grown into adulthood and now lives among the baboons. According to the narrator, the dog and the baboons have formed something of a symbiotic relationship with one another, not unlike the one dogs and humans have had for many thousands of years.

Here’s the full text from the video:

“Kidnapped pups grow up with the baboon family, feeding with them at the dump, following the migrations of the group, and sleeping together. Baboons even groom and play with the dogs, a sure sign they’ve been accepted by the male of the harem, as these primates only groom family members. The relationship seems to benefit both dog and baboon. The dogs are treated like family pets while they defend their adoptive family from other feral dogs and stand guard at night.”

Obviously, if we go strictly by what the video tells us, we already know the answer to the question proposed in the title of this piece – do baboons actually keep dogs as pets? Yes, the video says. Yes, they do. But there’s some question as to whether or not the imagery and narration from the video are completely reliable.

Dr. Hal Herzog of Psychology Today wrote an essay about the whole thing back in 2011. He had previously hypothesized that that the only animal to keep other animals as pets (outside of captivity, mind you) was the human being. When the above video showed up on his radar, he was taken aback, to say the least. Herzog did as much research as he could on the subject. He searched through a bunch of baboon literature and didn’t come up with anything. He contacted various canine behavior and evolution researchers, but again, there was nothing of interest to be found. He even emailed the director of the Animals Like Us video, though he never heard back from her. When he contacted the Saudi Arabian American Baboon Research Association, they told him they were aware of the baboons in question, but didn’t know anything about them kidnapping dogs (though they had witnessed them kidnap kittens and planned to research the strange behavior at some nebulous point in the future).

Finally, he determined the breed of dog in the video – not a feral dog, but a type of pariah dog called the Caanan Dog – and contacted Duncan Schroeter, an expert on such dogs. Schroeter was indeed aware of the baboons and dogs of Ta’if, and in fact had tried to get Saudi Arabia wildlife officials to look into their relationship, to no avail. Schroeter also noted that he was aware of dogs and baboons intermingling elsewhere in Saudia Arabia.

And yet Schroeter wasn’t convinced that these dogs had actually joined the baboons as family members. Here’s what he had to say about it:

“Are these baboons and dogs merely tolerating each other in areas where both can find food or are they truly living together with the dogs staying with the baboons when they move away? It is easy and more sensational to put any interpretation on commercial ‘documentaries.’”

Schroeter wasn’t the only person to be skeptical of the video’s claims. Anthrozoologist Boria Sax told Herzog:

“You can’t tell just what is happening from the video alone, and we have only the word of the narrator that the dogs are kept as pets. I am skeptical.”

“Dogs as pets of baboons? Science fiction. Baboons and dogs share the same environment, and they are socially plastic, so they enjoy the company of others. It seems the male is just ‘playing’ with the puppy, I wouldn’t call it kidnapping. Additionally, a pet should be fed, at least. Do the baboons feed the puppies? I wouldn’t think so.”

Schroeter, Sax, and Kubinyi all make good points. While the video is undeniably fascinating, it’s far too brief to function as solid evidence of the baboons keeping the dogs as pets. How do we know this is the case? How do we know that the dogs feed with the baboons? How do we know that they guard them and migrate with them and live with them as a family? We don’t, really. All we know is what the video tells us, but there’s just not enough of it to bolster those claims. Yes, as Hal Herzog pointed out, male baboons do have a habit of stealing infant female baboons and bringing them into their harems, so it’s possible he’s doing something similar with the dogs. Without further research, though, it’s impossible to know what’s what. 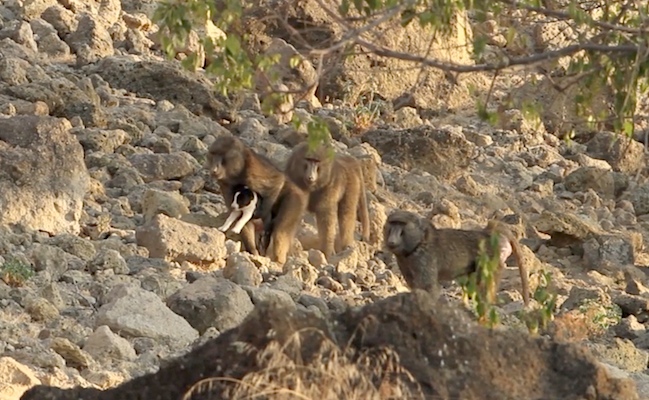 Interestingly, another video featuring a baboon manhandling a puppy popped up earlier this year (courtesy of The Naturalist’s Notebook). A Cornell student named Luke Seitz was on a bird research trip in Ethiopia when he managed to record a video of a baboon carrying a dog around “like a pet.” He apparently witnessed this behavior over a period of days, so it wasn’t just a fluke.

Watch the video below (it’s okay, it’s not nearly as difficult to watch):

It’s worth noting that the puppy appears to be completely at ease throughout the video. Does that indicate that he or she is truly a part of the baboon’s harem? Or is he or she just a really calm dog that doesn’t mind being picked up by strange monkeys?

Whether or not the baboons are literally taking the dogs as pets, it nevertheless seems pretty extraordinary that they would groom each other and play together and interact as they do in the videos. Of course, “Baboons And Dogs Hang Out Together In The Wild” is not nearly as headline-grabbing as “Baboons Take Dogs As Pets.” As to whether or not there’s an actual familial bond going on between the baboons and dogs, again, we won’t know the full story until there’s more extensive research done. Which, you know, hopefully there will be, because otherwise I kind of feel like I just watched the cliffhanger to a really good TV show that just got canceled.

As io9’s Lauren Davis noted in an article about the Animals Like Us video, if indeed these baboons are raising the dogs as their own, it could be a window into what the original domestication of dogs by primitive humans might’ve looked like. After all, we almost certainly kidnapped wolf or wild dog puppies for our own purposes, training them to stand guard, protect families, and hunt, among other things.  Maybe there’s just something about wanting to take care of dogs that’s hardwired into our primate DNA. That would explain why every time I see one on the street, I want to take it home with me to live forever and always.