“What breed is your dog?!?” As a dog parent, this is probably one of the most-asked questions you get. It’s also one of the things that might drive you mad with curiosity. A lot of the time, we have the same question “What is my dog??” Well knowing more about your dog’s breed and DNA can help you understand everything from health, to why he freezes up anytime he sees a squirrel. Luckily there are a few ways to figure it out and we’ve got your back, this what breed is my dog quiz is the perfect way to find out…

Most Accurate Way to Figure Out Your Dog’s Breed: Embark DNA Test The company was founded by two dog-loving brothers, one of which is a Cornell University genetics professor. Even Oprah backs these guys. Testing for you, and you, and you!

WHY WE LOVE IT:

-With just a cheek swab, you can find out the breed breakdown of your pup!

Less Accurate (But free!) Way to Figure Out Your Dog’s Breed: What Dog App

Here at BARK we were pretty excited when we learned about Fetch!, a new Microsoft-made app for iPhones that identifies your dog’s breed when you take their picture. We took a spin with our pawffice dogs to play Fetch! and see if we could learn a thing or two about our favorite pups. And boy did we.

All in all we were pretty darn impressed. Sometimes, What Dog absolutely nailed it, but other times, well… A couple times, What Dog missed the mark:

4. Ricky
Brandon, Ricky’s dad, says: “He’s a Chihuahua, according to the adoption papers.” 7. Charlie
Perry, Charlie’s mom, says: “Charlie is a Cockapoo and he gets embarrassed every time I say the word…” And in some cases, What Dog might’ve found something we didn’t know: 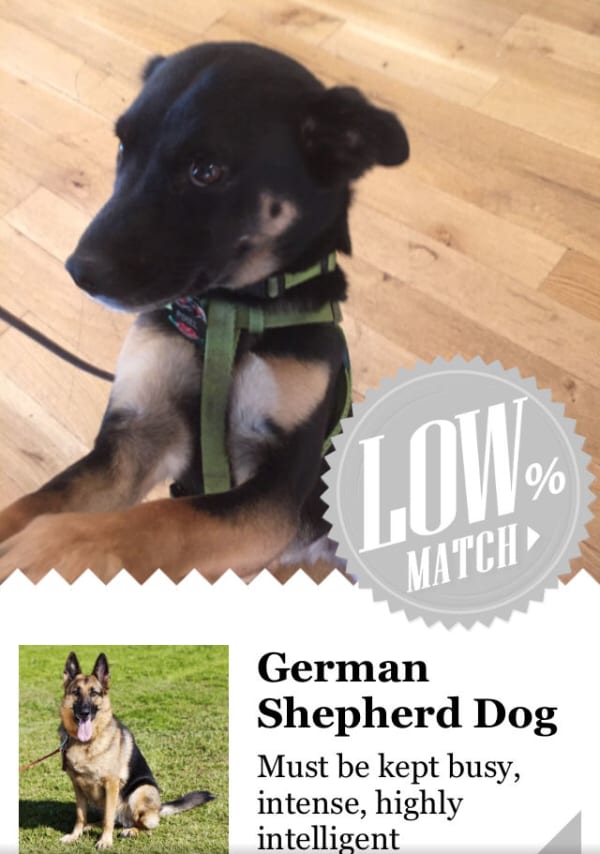 9. Ziggy
Zoe, Ziggy’s mom, says: “I think he’s a Pit-Hound mix but I’ve ALWAYS thought he had a little Great Dane in him.” What Dog can be played more than once. You can take more than one picture and compare results Nice catch, What Dog Toby, give us another angle darling. That’s it! Oh… wait… 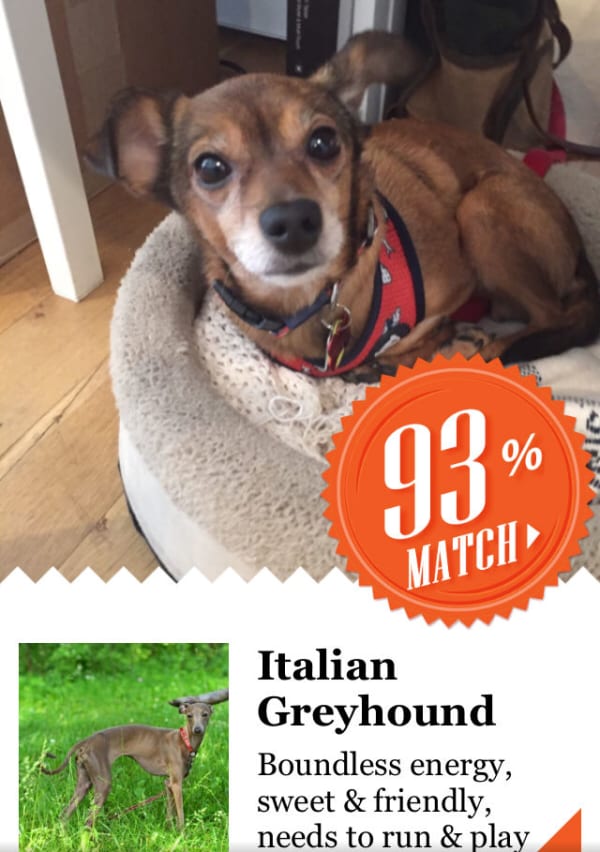 Or if you want, you can even run the same picture more than twice:

Stacie, Pimm’s mom, says: “When I did the Wisdom Panel DNA test, it said she is Chihuahua, Russell Terrier, Staffordshire Terrier!” And on second thought, What Dog says: 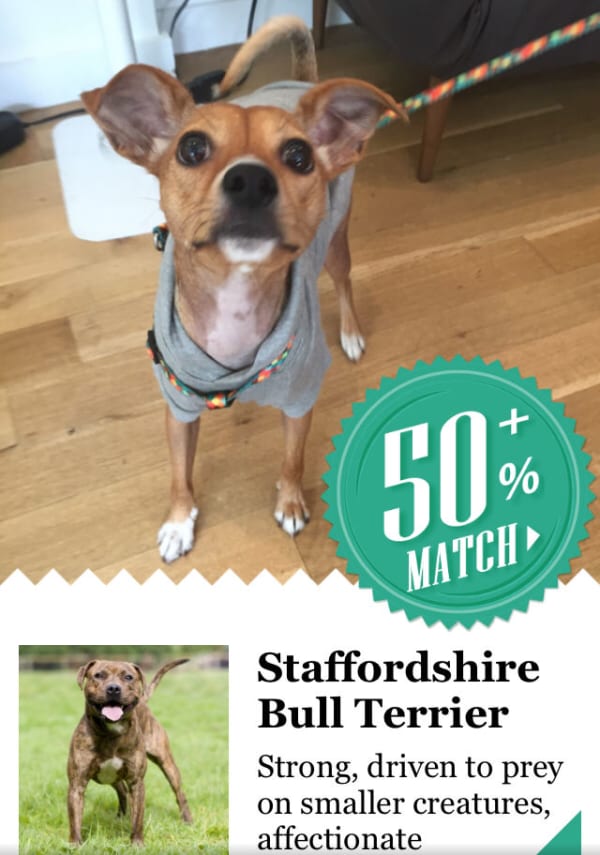 And, just for poops and giggles, we thought we’d run a few humans through the app. And What Dog is totally in on the joke: And sometimes, What Dog reveals dark truths about you or your friends. Is this dog person… a dog, person??? Remember to use What dog carefully. You never know what you’ll find out.

So if you’re ever stuck wondering what kind of dog is this?  What dog has your back.

We had so much fun using What Dog around the pawffice, we think you’d enjoy it too! Download Fetch!

All images featured above taken on author’s iPhone using What Dog with the permission of the dog’s and their humans.
Featured Image of Mister Griff. 😛

Want To Wake Up To Snugglesome Puppies Every Morning? There’s An App For ThatQuiz: What Should You Name Your Dog?Which Dog Breeds Are Good With Babies?What Dog Breeds Are The Best Watch Dogs?12 Dog Breeds With Houdini-Like Escape Artist Skills