Puplifting Moments: 18 Rescue Organizations That Did Great Work In 2015

With so many animals in need of loving homes, the rescue community needs all the help it can get.

Luckily, many wonderful rescue organizations stepped up to the plate in 2015. From pairing rescue wolves with veterans in need of emotional healing to working to eradicate the dog meat industry, these 15 groups went above and beyond this year – and hundreds of pups’ lives are the better for it.

Regulations against dog meat farming in South Korea are vague, confusing and easy to subvert. That’s why the Asia Canine Protection Alliance (ACPA) has dedicated itself solely to eradicating the dog meat trade. The ACPA helps farmers transition to agricultural farming instead of meat farming — and their efforts working. One farmer, Lee Tae-hyun, was able to release 57 dogs to the United States for adoption after financial and physical help from the ACPA. He now farms peppers.

The inspiring Warriors and Wolves program at California’s Lockwood Animal Rescue Center pairs rescue wolves and wolf-dogs — many of whom were formerly shackled or mistreated — with veterans suffering from PTSD.

In a time of need, there’s nothing quite like a best friend.

On this year’s #GivingTuesday, a day dedicated to post-Thanksgiving generosity, Big Dog Ranch Rescue had the cutest campaign ever: for every donation made, the rescue posted a video of a shelter pup receiving “attention, love, and special one-on-one time” to its Facebook page.

Everyone wins here: BDRR gets the funding it needs, and the Internet gets a new slew of adorable puppy videos. Ka-ching.

Thank you Ivy for your #GivingTuesday donation! Because of you, Tate is getting some TLC!https://www.bdrr.org/giving-tuesday-2015

The Beagle Freedom Project rescues laboratory beagles from the cruel world of animal testing. This year, a group of beagles was retrieved from a lab in Korea — where they had spent five years of their lives in cages.

The dogs then journeyed to California, where they began their rehabilitation process – and got to play in the grass!

5. Sasa Pejčić and the Harmony Fund

One of the year’s most heartwarming viral videos came from pup ruver Sasa Pejčić, who transformed a former equestrian stable into a safe haven for the stray dogs of Niš, Serbia.

Once dogs enters the facility, they are microchipped, vaccinated and given food, water and medical care. Many of the pups are eventually adopted into loving forever homes – but they still need care until that happy day. Help them out here.

Jo Lyons’ work is proof that a seemingly small gesture can save a life. Her beautiful photo of Fantasia, a playful shelter Staffie scheduled to be euthanized, was posted by the Renbury Farm Animal Shelter, the facility housing Fantasia. The adorable shot made waves quickly, even prompting a Facebook campaign to save the precious pup.

It worked – Fantasia found a temporary foster home soon after. There is also a current GoFundMe page dedicated to finding her forever home.

Jo, you are one great hooman.

When disaster strikes, humans rely on relief organizations like the Red Cross and the Salvation Army. Now, Philadelphia pets can rely on the Red Paw Emergency Relief Team. In a ceremony honoring the organization this April, Philadelphia Deputy Mayor Everett Gillison described the full scope of its vital disaster work.

“Red Paw volunteers respond to all kinds of emergencies,” he said. “They conduct search-and-rescues for pets at the scene [of disasters], transport displaced pets, foster pets, find new homes for pets who can’t be reunited with their owners, and more.”

To top it off? This pawsome nonprofit operates 24 hours a day, 365 days a year.

Unfortunately, a shelter falling by the wayside is not unheard of. That’s exactly what happened at a rescue in Virginia, where 46 Cocker Spaniels were left in hot, unsanitary conditions. When senior officers at the shelter suspected something was amiss, they contacted Oldies but Goodies Cocker Rescue, who were quick to swoop up the 46 pups – doubling the number of dogs in their care – and provide them with proper medical attention and comfort.

For Jeff and Diana Hall, a relaxing vacation turned into a rescue mission.

While on a trip in Mexico, the couple discovered a pack of 34 animals – 13 puppies, 14 adult dogs and 7 cats – in desperate need of help. Unfortunately, the local animal shelter was full to the brim, so the Halls started a rescue of their own. Since finding their new friends, the Halls have raised over $55,000 to relocate the pack to Minnesota, where they hope to find furever homes for each one.

Downtown Dog Rescue was BarkPost’s April Shelter of the Month, and with good reason. Their Shelter Intervention Program has kept thousands of dogs out of the Los Angeles shelter system. Often, dogs are surrendered to shelters for highly preventable reasons. Downtown Dog Rescue helps low-income families shoulder the sometimes unexpected costs of pet ownership – from unexpected spay/neuter procedures to quickly-rising vet bills. This way, loving families can stick together – and pups can stay out of the shelter system.

As shelters become more and more crowded, a heartbreaking number of dogs are euthanized simply because there’s no more room. Enter Pilots N Paws and Wings of Rescue: two volunteer organizations that coordinate missions of transport for pups in need of relocation. No room at a shelter? They’ll take the surplus dogs somewhere where there’s a little extra space.

One pilot even admits snuggling with a few pups en route. We get that.

Vet Ranch is a nonprofit center that provides medical treatment to pets who have no owners to foot the bill. The pets are then adopted out to new homes.

Check out Gracie’s story in the video above – she and her twelve (12!) puppies found new life and new hope during their stay at Vet Ranch.

Taking care of one puppy is no easy feat — especially when it’s been separated from its mother too early. California rescue Doggie Protective Services recently took in ten orphaned pups, then raised them for over a month until they were ready to be weaned. Talk about great work.

Also, the dogs all have candy-inspired names. Hello, lil Starburst!

Traumatic brain injuries and PTSD take a significant toll on hundreds of U.S. veterans. Operation Delta Dog seeks to soothe their pain by pairing them with loving, helpful service dogs. These service dogs complete an extensive 12-15 training program. Upon graduation, the pups are equipped to help relieve stress, manage depression, control panic attacks, provide stability to those with balance problems, wake their humans from night terrors, act as “buffers” in crowded places and even perform “perimeter searches” in dark houses or rooms before their handler enters.

Bonus: Every ODD service dog was once a shelter dog. Once all the pups are cleared for adoption, they’ll head to their new homes. Even better: some will even be trained to become veteran service dogs.

The Mr. Mo Project was founded by Chris Hughes and his wife, Mariesa, to honor their late dog, Mr. Mo. Its mission? To rescue often-overlooked senior shelter dogs and situate them in permanent homes. 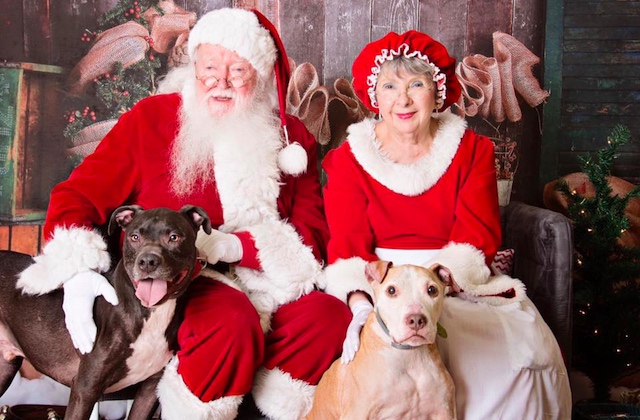 All Mr. Mo rescues enjoy vet bill assistance, free transportation to their furever homes, free in-home training, and all sorts of other benefits. The best benefit of all, though, is a loving fam.

New York Bully Crew is a Long Island-based rescue organization specializing in Pit bull and bully breed rescue (although it accepts other breeds as well). While their main priority is finding stable homes for each dog brought in, NYBC also seeks to dispel commonly held prejudices against bully dogs. “We at NYBC firmly believe that there are no bad dogs, just bad owners,” the NYBC website reads. “Educating the public is a must if the bully breeds are to have a chance at survival in today’s society.”

Special needs dogs often need love most of all – but they don’t always get it.