Home » Fun » Anxious Pup? We Have A Solution!

Anxious Pup? We Have A Solution!

Boy oh boy is my little Ricky a handful. 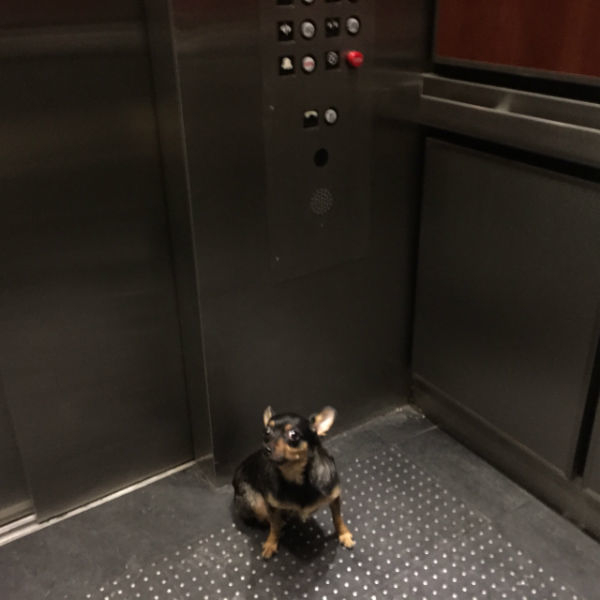 …or hanging out with pet psychics…

…or ruining my selfies… …then he’s probably just barking up a storm.

So I got Ricky a ThunderShirt. This product for dogs is sort of legendary amongst dog lovers. Supposedly the snug fit of the ThunderShirt has a calming effect on dogs that many customers swear by. Garb your pup when you most expect them to experience anxiety (like a thunder storm or car ride) and the hug-like effect of the shirt soothes the dog, decreasing anxiety. I’ve always been skeptical of the shirt’s effect, mostly because it sounds too good to be true, so I never actually considered getting one. Plus I’m just very very cheap. So spending forty bucks on something that I might eventually toss into the pile of forgotten dog paraphernalia just did’t appeal to me. But lately, Ricky’s barking has gotten so persistent that it leaves him short of breath and anxious. No, I don’t want to hear his loud barking, but it was more important to me that his barking not be a symptom of anxiety. So I started thinking about getting the shirt.

After a co-worker with a lot of firsthand experience using ThunderShirts on her dogs insisted the shirt was well worth the cost, I bit the bullet and ordered one online. Being the cheapskate I am, I opted for standard shipping, but that didn’t stop the shirt from getting to me in less than a week. It arrived at the office on a day I left Ricky at home, so I decided to try it out on Freenie, who’s about Ricky’s size. This little pup has a set of lungs on her, too, and Freenie likes to spend her afternoons in high energy mode. Like this: When Freenie’s mom slipped the ThunderShirt around Freenie’s torso and tightened the velcro, well, this happened: And that’s exactly where she stayed until I took the shirt off her at 5pm to go home. I could not wait to put my new ThunderShirt on Ricky.

Before I put it on Ricky, I took the time to read the instructions that came with the box, mostly to make sure I didn’t fit it too tightly on Rick.

The instructions I read quickly made it clear that the ThunderShirt is more of a tool than a magic wand.

In a nutshell, the ThunderShirt does have a calming effect on dogs all on its own, yet still requires that the human help the dog build positive associations. If you put the shirt on your pup and expect it to abracadabra away all your anxiety woes, then think again.

The first step is to properly introduce your pup to the product. The instructions recommend presenting the ThunderShirt to the dog with treats, to begin the positive associations from the get-go. So after a proper introduction, I fitted the ThunderShirt around Ricky, gave him another treat and then left him to his own devices.

Normally, Ricky would have followed me into the kitchen to bark and jump (his version of begging) while I made dinner. It was only after the linguine had boiled and I prepared to wilt my spinach that I realized Ricky wasn’t in the kitchen at all.

When I went in search of him, he was still in the living room, right where I had left him after dressing him in his new ThunderShirt. One week later, I’m still convinced. Ricky is a quieter, calmer version of himself. He’s considerably less excitable around the pawffice, and less demanding around the home.

In fact, let me check in with Rick real quick to see if he still likes his ThunderShirt. I’ll take his tranquil silence as a resounding yes. Thanks, ThunderShirt!