13 Breeds That Go From Super Small To Friggin’ Humongous

All breeds start off small, where some stay small and some get to be a normal size. But some get big. Like really big.

Here are 13 breeds that exceed the “one-size fits all” deal. 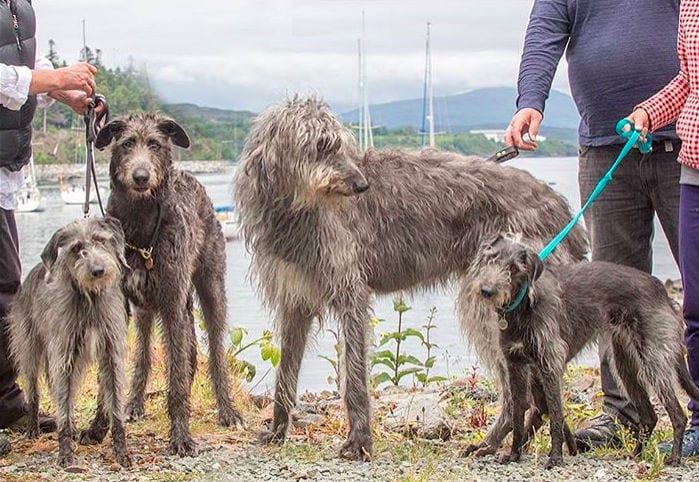 Known as the “Royal Dog of Scotland,” these guys can get up to be 95-110 pounds and average out around 30 inches tall. Did you know the Irish Wolfhound is the tallest of all dogs? Tall is no exaggeration, a full-grown male can stand 32 to 34 inches at the shoulder and easily weigh 120 pounds. They can get up to 140 pounds! We repeat, 140 pounds. As puppies, these guys are cute, but sooner than you know it you have a full-grown pup before the age of one. According to the AKC, the Black Russian Terrier was created due to Red Star Kennels, an army-controlled Soviet kennel program dedicated to developing special-duty breeds. At about 6 weeks, Great Dane’s can weigh up to 20 pounds. (wait, that doesn’t sound very small…) That’s why Great Danes are limited to activities when young due to health complications like skeletal abnormalities, hip dysplasia (arthritis of the hips) and osteochondrosis, a condition that affects the joints of young, rapidly growing dogs. Mastiff, not massive, even though that word describes them too. According to Dogtime, they can weigh up to 220 pounds. All those wrinkles might look like nothing, but underneath is a powerful guard dog that can weigh over 150 pounds and stand up to 31 inches at the shoulder. Who said wrinkles were a bad thing? These big, strong and fluffy breeds are from…you guessed it, Newfoundland, Canada! Originally trained as a working dog intended to pull nets and haul lumber, these guys are known for their strength and burliness. Need a pup to pull you on a sled? This is your guy. Known to hunt big game like wild boar, Cane Corsos are built like Mastiff’s, just a tad smaller. They aren’t as big as their other friends on this list but they are muscular and can weigh up to 120 pounds. Need someone to pump iron with you? He’s in! They might look like giant cotton balls but they are known for protecting you, livestock, a floating balloon and the squirrel that runs along the fence—because you need protection from all of them. These gentle giants have the mentality of “If I fits, I sits” and will squeeze in all 160 pounds (or at least try). They are big, fluffy and everything you need when you want to snuggle. Bernese Mountain dogs were bred to protect livestock and pull carts on Swiss farm. He is a large and hefty breed with a soft personality, so breaks things to him gently. Hey, Beethoven! This breed isn’t just known for being a movie star, but also for finding lost and injured people. He is a large, muscular dog who can grow up to 30 inches tall and 180 pounds! Scoot over Beethoven. Yup, another Mastiff. Except this one is from Tibet and guess what? They don’t shed. They “blow their coat” once a year, according to American Kennel Club. But like their other Mastiff friends, they can weigh up to 160 pounds. The what? The Leonberger, named after Leonberger, Germany, also known as a Leo is large and in charge. Heinrich Essig, the creator of this breed, was said to want a dog that resembled a lion on the town crest.