Home » Fun » Neglected And Covered In Maggots, This Bull Terrier Is Fighting For His Life

Neglected And Covered In Maggots, This Bull Terrier Is Fighting For His Life

****This post contains pictures that may be disturbing to some pup lovers.****

Last week, rescue workers seized five dogs from a property in Las Vegas, New Mexico. The dogs had spent their entire lives chained outside. They were emaciated and malnourished.

NMDOG, a rescue and outreach organization, took custody of one of the pups, whose name is Hubble. Hubble is a Bull Terrier who weighs only 26 pounds due to extreme neglect. Sadly, that is only the beginning of his tragic story. Hubble has infections all over his body, many of which are causing the surrounding skin to die. Horrifyingly, these infections were swarming with hundreds of maggots. It is almost impossible to believe a story this awful could be true. 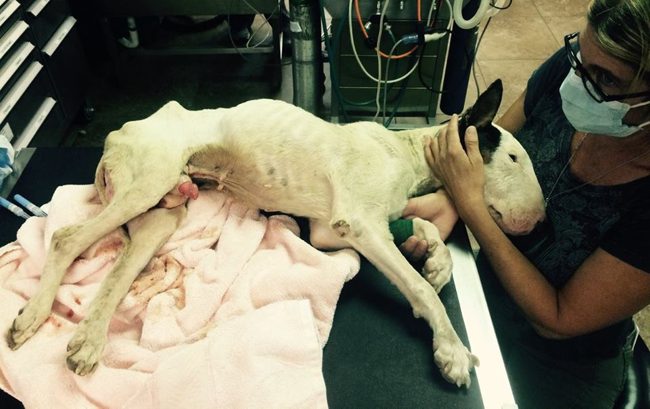 Everyone involved in Hubble’s rescue agrees that the pup would’ve died within 24 hours had he not been rescued. From merely looking at the photos of him, it’s easy to see that his condition could have been fatal.

One caring human from NMDOG wrote on the organization’s Facebook:

“I visited HUBBLE, held him close, told him how much we loved him, how hard we would fight for him. I told him of all of the good that awaited him should he decide to stay. I also told him, if he did not have the fight left in him, that it was ok & we would send him home without pain, without regret & only with Love.” The doctors at Petroglyphs Animal Hospital were able to treat Hubble’s wounds, remove the maggots and give the pup a much needed blood transfusion. Hubble made the decision to not give up and he made it through his first 48 hours, no doubt thanks to the treatment and outpouring of love he received from his rescuers. Although Hubble is improving, he still has an incredibly long way to go and is not out of the woods. He still has several severely infected lesions, which doctors are planning to remove today. The pup’s body is so frail that the surgery is dangerous. However, the lesions will likely be fatal if his doctors don’t remove them. We wish Hubble the best of luck with his surgery and recovery. You can follow his progress on the NMDOG Facebook page. You can donate to Hubble’s recovery on his YouCaring site.