When Oz the bulldog came into Massachusian Janessa Ressendes’ life, he immediately felt like an extra-hairy potbellied son. Oz immediately was a central part of Janessa’s family. He was the best man in their wedding… …And he often accompanies Janessa and her husband when they go out for dinner. Oz’s favorite restaurant is Siena on Federal Hill in Providence, RI– he always orders the meatballs without marinara sauce. 😉 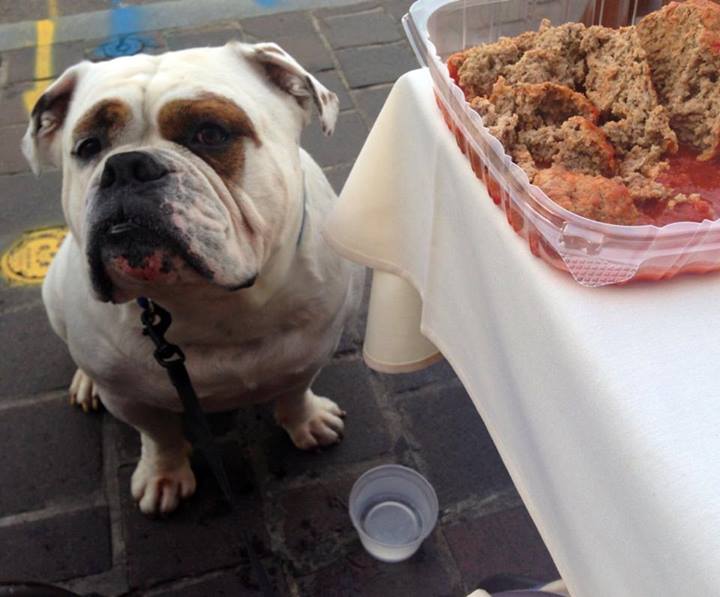 Since Oz is such an important part of the Ressendes family, it was only fitting for Oz to help make the announcement when Janessa and her husband found out that they were expecting a baby. (Janessa even told Ozzy the good news before she told her husband! ;)) The day Janessa and her husband brought home their human son, Braylon, the most incredible bond developed between the baby boy and his pup. As Braylon grew, Ozzy took his role as a big brother very seriously. Ozzy understood that big brothers should be naptime guardians… … and big brothers are there with you through life’s important events. Even if that means looking a bit silly for a day. 😉 But most important of all– Ozzy understood that big brothers are there to teach you about all of life’s important lessons and small pleasures. Today, Ozzy and Braylon’s bond is stronger than ever. Braylon’s first “chore” was learning to fill Ozzy’s dog bowl. At 15 months Braylon understood how to take Ozzy’s bowl to the food container, wait for his parents to scoop the food, and then walk the bowl back to its original spot. (Though there are some snacks snuck in between meals.) These days when Braylong cries in the middle of the night, more often than not, Ozzy beats Janessa to Braylon’s room. Janessa said that she’ll walk into Braylon’s room and his cries have turned to giggles as she enters to see Oz sitting by the crib staring at his little brother. Janessa says there’s nothing more a mother could ask for– her boys couldn’t be more perfect for each other. There are few things more beautiful than the relationship between a little boy and his bulldog.

*UPDATE 1-5-15* A huge congrats to the Resendes family on their new addition! So much ruv all around. 🙂