Home » Fun » If Chewbacca Were A Dog, What Type Of Dog Would He Be?

If Chewbacca Were A Dog, What Type Of Dog Would He Be?

So if you’re like a lot of us, your plan this weekend is to take a trip to somewhere long ago, in a galaxy far far away. And you can probably guess our favorite character ’round these parts- obviously Chewbacca, the living embodiment of man’s best friend. Chewbacca, of course, is a Wookiee, not quite a dog. But as it turns out, he was directly inspired by George Lucas’s beloved Alaskan malamute, Indiana. (And yeah, that’s right- George named Indiana Jones after his dog. George, you’re a man after our own hearts.)

As George Lucas himself said:

I had an Alaskan Malamute when I was writing the film. A very sweet dog, she would always sit next to me when I was writing. And when I’d drive around, she’d sit in the front seat. Having her with me all the time inspired me to give Han Solo a sidekick who was like a big, furry dog. So Chewie was inspired by an Alaskan Malamute! But there’s more to it than that. One man might have the vision, but that doesn’t make the vision infallible (see: Episodes I-III.) Maybe George Lucas based Chewbacca off of his Alaskan Malamute, but the true personality of Chewbacca is far too sophisticated to capture in just one dog. I think we can do better than George. It is time for the student to become the master.

So here’s the game we’re playing today, folks: If Chewbacca was a dog, what would his mix be?

Let’s break this down, going by the most essential characteristics of Chewbacca, and seeing where he might’ve picked those traits up from.

SIZE & STRENGTH
Chewbacca is huge. Seriously, dude is 7’2″. So, what are some of the biggest dog breeds? There’s the Great Dane, which on the upper-end are nearly three feet tall and average 120-200 pounds! (in males.) There’s also the Tibetan Mastiff- the male can reach an average of 26-30 inches in height, and a weight of 100-160 pounds. That’s a lot of dog. THAT FACE
Chewbacca might be huge, but he’s got at least a trace of the baby face of a Brussels Griffon or a Lhasa Apso. You can’t hide your dainty roots from me, Chewbacca. I’m onto you. LIFESPAN
Wookiees live for hundreds of years (live long and prosper, am I right? No I’m just kidding don’t hurt me!) One of the longest living dog breeds, surprisingly enough, is the Dachshund- with an average of 15-17 years! What makes them so resilient- is it their sandwich thievin’ skills? TEMPERAMENT
Wookiees are known for being deeply loyal- one of the communities most precious to the Wookiee is the Honor Family, the group of people you would die for and be loyal to forever, even if they aren’t of your species (DOG ALERT!) Han, Leia and Luke, for instance, are clearly Chewie’s Honor Family. When you’re talking loyalty, the mind almost naturally drifts to the Labrador Retriever, one of the most people-friendly dog breeds. On the flipside, Wookiees are very territorial and suspicious of outsiders. The Rottweiler is deeply loyal, but very territorial- not a fan of outsiders at all. Chewbacca loves you if you love him, but if you make him mad- he’s ready to rip your arm right out of your socket. There’s probably no dog that would go that far, but I definitely get that vibe from a Rottweiler. ADAPTABILITY
Chewbacca, like all Wookiees, has a long, shaggy coat of fur. And although the Wookiee home planet of Kashyyyk is pretty temperate in climate, Wookiees are highly adaptable, and comfortable in climates ranging from the ice world Hoth to the jungles of Endor or the deserts of Tatooine. For climatalogical adaptability, it’s hard to beat- once again- the Labrador Retriever. INTELLIGENCE
Chewbacca might be hard to understand, but he’s much smarter than you would think. The dude is the co-pilot of the Millennium Falcon! He can repair a droid in a pinch! The German Shepherd is one of the smarter, craftier breeds, and I wouldn’t be at all surprised if they’re a factor. There’s a lot of contenders here, but a few feel just a little bit more ‘right’ than the others.

The Tibetan Mastiff is a strong candidate. I mean, LOOK AT THIS PICTURE. They’re huge AND they’re long-lived relative to a huge dog. Then you add the smarts, athleticism, skillfulness, and territorial nature of a German Shepherd. The loyalty, smarts, adaptability and coloring of a chocolate Labrador Retriever is in there too. And lastly, some trace elements of Lhasa Apso and Brussels Griffon, for that signature bearlike face. 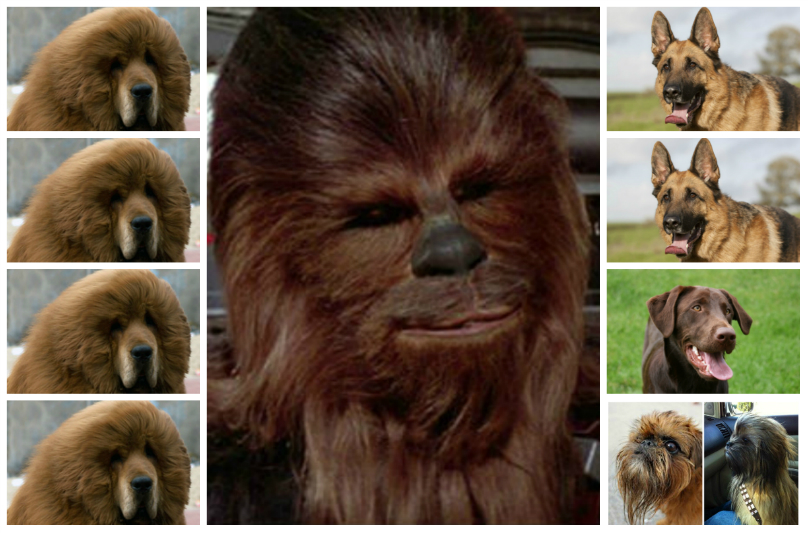 Did we get it right? Got your own theory? Let us know!