In Greek mythology, a Chimera was a fire-breathing hybrid monster. Generally depicted with a lion’s body, a goat’s head on its back and a serpent’s tail (often with, you guessed it, another head), Homer’s “Illiad,” described it as:

“A thing of immortal make, not human, lion-fronted and snake behind, a goat in the middle,and snorting out the breath of the terrible flame of bright fire.”

In case that description doesn’t get your visualization gears going, refer to below: Terrifying, right? Well, in the world of puppies, a chimera looks more like this… In biological terms, chimeras are the result of a genetic anomaly – one animal (like the puppy above) – has cells derived from two different cell lines (in the case above, a black Labrador and a yellow Labrador). In an article on the The New Republic, Columbia University Professor of Genetics and Development Virginia Papaioannou explained, “a chimera…is made up of cells from at least two different original embryos. If they fuse together early enough, they will become a single organism whose genetic input is from two completely different individuals.” Chimeras are exceedingly rare. In 2012, a cat by the name of Venus appeared on the Today show and became an Internet phenomenon. This two-faced feline has a YouTube video with over a million views and over 470,000 likes on her Facebook page. Now, back to the puppy. Her name is Tiger and her story was profiled by Pawnation.  She was born in 2010 and obviously, her owners noticed her uniqueness immediately. They spoke to a geneticist who instructed them to send DNA and hair samples to be tested. The results confirmed that Tiger is a chimera Labrador! Besides being mistaken for a Dalmatian and compared to Holstein cow, Tiger is just like any other pup! 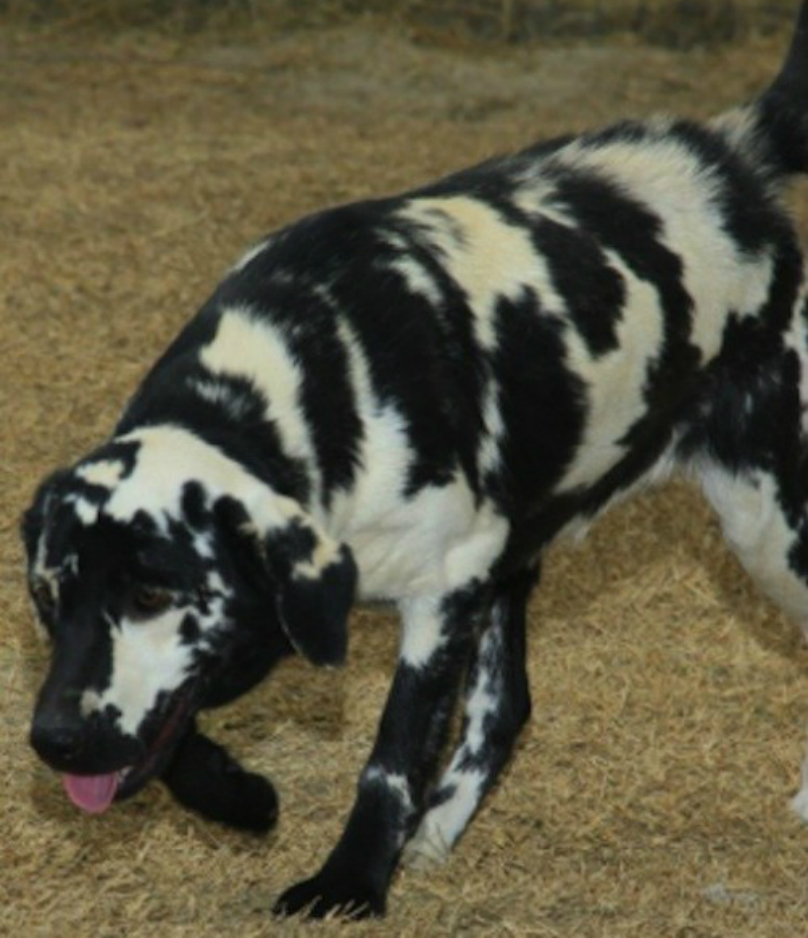 “Tiger has personality plus. She is a very happy girl. She doesn’t take herself too seriously. She is more than a bit of a diva and a rascal.”