8 Colleges That Are Harnessing Puppy Power To Destress Their Students

Anyone who has dogs can testify to their almost magical ability to promote emotional and mental health in their human companions. Indeed, the mere act of petting a dog can reduce stress hormones and produce stress-relief hormones (and that’s on top of the fact that just being around dogs can lower your blood pressure, improve your self-esteem, et cetera).

For all these reasons and more, colleges around the world have employed dogs in the service of destressing students, particularly during finals. It’s the sort of thing that can make a guy really angry, because…well, why didn’t my school have one of these deals? For all the money I paid, I didn’t get to pet a single dog.

Anyway, here are 8 such jealousy-inducing programs:

1. The University Of Central Lancashire 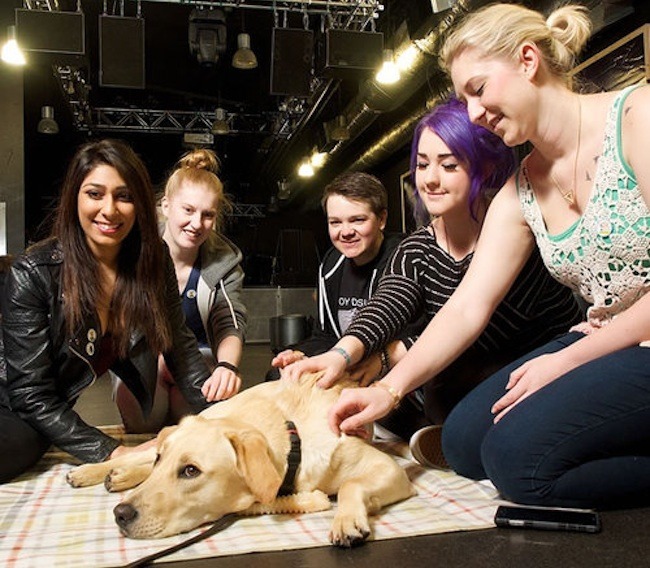 This year, the University of Central Lancashire joined forces with Guide Dogs (a UK organization that provides mobility for blind or partially sighted people) to help destress students AND raise funds for the organization. For a small donation, students were given 10-15 minutes to play with the available dogs. The University of Minnesota’s PAWS (Pet Away Worry And Stress) program allows anyone – not just students – to play with therapy dogs, cats, rabbits, and a famous chicken named Woodstock as a means of relieving stress. UConn’s Paws to Relax program holds therapy dog sessions in the library during its finals week, with dogs of all types, including a Newfoundland named Dooley, a German Shepard named Cooper, a Pug named Bella, and an English Mastiff named Vinny. While the University of Iowa has a number of destressing activities during finals week – a pancake breakfast, morning and evening Yoga, massages – easily the best of the bunch is the therapy dogs meet and greet. I say that as a completely biased individual who likes dogs way more than all those other things, especially Yoga. At Yale Law School, if you’re feeling down or stressed, you can check-out (yes, like a library book) Monty the therapy dog for 15-20-minute sessions, either by yourself or in groups of four. I don’t think I’m exaggerating when I say that Monty’s so cute my head feels like it’s falling off. 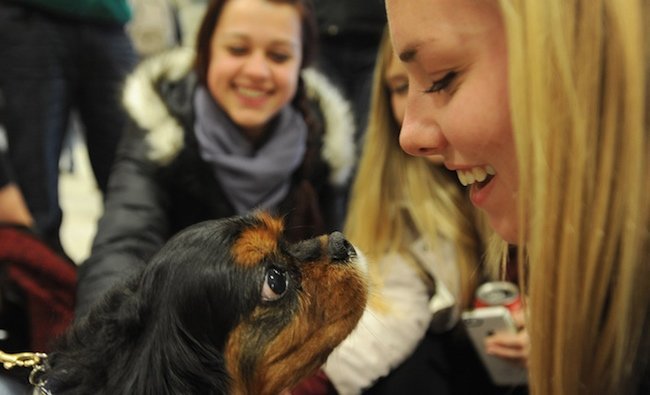 According to Kent University, their Dogs on Campus program was the first of its kind, having been established by Assistant Professor Kathy Adamle in 2004. Now, therapy dogs return twice a year to comfort those students who are having a difficult time at school or just missing their pets. Pet Hug therapy dog events at UC Berkeley don’t just take place during finals week – they take place on the first Tuesday of every month during the academic year. Because let’s face it, it’s not like finals are the only time of year that students get stressed out.