Hamilton Pug was clicking through his email, deciding whether to take advantage of the latest Groupon offer for a newly-opened steakhouse, when a new message popped up in his inbox. 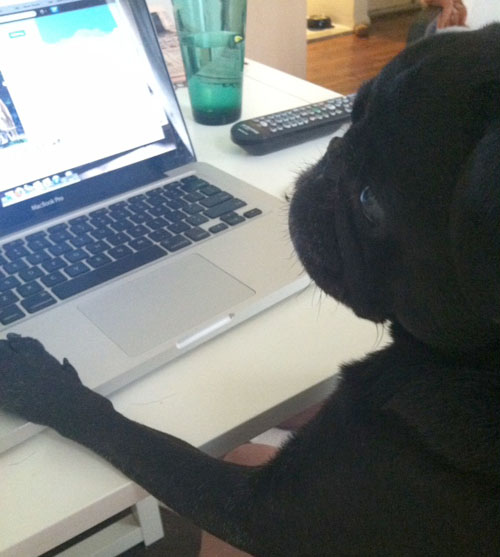 It was Animal Haven, the New York City shelter, getting in touch to find out if he would be interested in opening his Manhattan apartment to a couple of kittens for a month or so.

“Hmm,” thought Hamilton. “This could be interesting. I bet I can teach them how to cook for me!”

After a brief discussion with his humans, Hamilton got the approval he was looking for and he told Animal Haven he’d be happy to foster the kittens, and he would be good role model for them. Hamilton pictured one kitten working the stove and the other managing the oven, resulting in nightly feasts for him.

The kittens arrived a couple days later, with the names “Creole” and “Crawfish.” But HamPug wasn’t sure that the names fit them, so they were temporarily renamed Wesley Snipes and Goldie Hawn, after their star-making roles in the movie, “Wildcats.” The kittens, a boy in gray and a girl in black, sure were cute and weren’t afraid of their pug dog host. Not surprisingly, at first, there was a fair amount of hissing, arched backs and barking.

But the kittens started to make themselves comfortable, quickly taking over Hamilton’s various dog beds.

After Wes and Goldie finished their bottle-feeding, they turned in for the night. Hamilton still was on edge that first night. Even though the cats were in their crate, Hamilton spent all night sitting by the bedroom door, guarding his humans from the scary three-week old kittens.

After a night of very little sleep, the humans wondered if they had made a mistake. They knew it would be tough introducing kittens into Hamilton’s home, but didn’t anticipate that he would spend hours (and hours) barking. Turns out, Hamilton was actually more interested in the kitty litter and their food than the cats themselves. After moving the crate out of Hamilton’s eyesight, serenity had been restored.

Goldie boldly tried to snuggle with Hamilton while Wesley tried to bathe him. Kittens are gutsy.

What followed was a pretty smooth transition of kitty-wrestling, chasing lasers on the wall, sleeping, eating, hide-and-go-seek in the Trader Joe’s bag, and supervising laundry day. Luckily, Hamilton has three beds to share and never complained. Just don’t get in his way while he eats. He doesn’t like that.

Hamilton spent the following weeks giving several lessons on cuteness, snuggling and begging. In return, the cats tried to teach Hamilton how to jump on the kitchen counter for scraps and Goldie showed everyone how to climb the shower curtain.

For the most part, the kittens were pretty into themselves and played (and played) with each other. Hamilton didn’t really know what to do them. “I mean, am I supposed to chase them? Eat them?” said Hamilton, frustrated. “They just keep sleeping on my beds.”

Rest assured, Hamilton wasn’t a total softy. He may have let them have free reign over his beds, but he did establish dominance from time-to-time.

Of course, the cats never missed an opportunity to mock Ham.

The kittens were really into Hamilton’s BarkBox and had a little too much fun with some Bowser Beer.

The weeks passed, snuggling ensued, and then came the call from Animal Haven that no one was excited about: It was time for Wesley Snipes and Goldie Hawn to return to the shelter to get fixed and then put up for adoption. As tough as Hamilton may appear, he was secretly going to miss cuddling his little pals. There was so much–

After a melancholy subway ride, the kittens arrived at Animal Haven to their new digs. Hamilton’s cuteness lessons definitely paid off because after only a week or so at the shelter, they were adopted together!

Hamilton is enjoying being an only child again, but as a former foster dog himself, he knows the importance of taking in dogs and cats temporarily.

He looks forward to his next set of fosters. Hopefully this time they will come equipped with cooking skills. Wes and Goldie never did cook him a single meal!