How The Dalmatian Became The World’s Favorite Fire Dog

When most of us think of Dalmatians, our minds are drawn to the black and white furry heroes sitting atop big, red fire trucks. That is—if you don’t think of the popular Disney film first. But how did it come to be that this dog was the face of the fire service? Well, it all started with a horse and a cart. 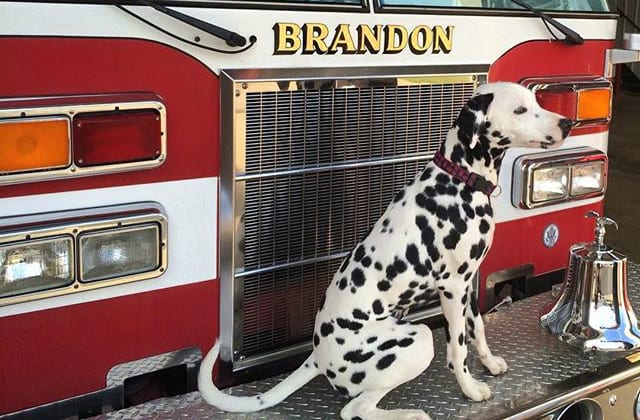 Dalmatians first began their transition to firehouse mascot back in England as early as the 1700s where they were seen as a status symbol. These were the days of the horse drawn carriage, and the wealthy—having noticed the breed’s strength and endurance—quickly found that the Dalmatian made the perfect coach escort. Firefighters eventually noticed the advantageous qualities of the Dalmatian as well, but instead of flaunting them, they put them to work. Since the fire trucks we are familiar with did not exist at the time, most fire stations had to make due with the same mode of transportation as the rest of society. This typically involved a horse drawn cart loaded with a steam pumper, and ultimately, a Dalmatian or two.

The dogs became the first firehouse siren, barking outside the station to alert bystanders and clear the area in the event of an emergency. They would then typically run in pairs, with one on each side of the coach, to the site of the fire. Because the Dalmatian is such an active breed, they were capable of keeping pace with the firehouse cart and horses even when sprinting for incredible distances. Mental Floss describes how, “Dalmatians…more than any other breed of dog, formed an amazingly close bond with horses once they were introduced. They also became quite protective and possessive of their equine friends.” This not only made Dalmatians great companions and escorts for the animals, but also superb watchdogs as horses and fire station equipment were prime targets for robberies. Once they reached the site of a fire, the dogs would guard the cart while helping to distract and comfort the timid horses from the blaze. Despite the massive success of these spotted, four-legged firefighters, advances in technology over the years made them less of a work necessity. Mechanical sirens and horsepower took over where they left off and the dogs started riding with the firefighters rather than running alongside them. In many stations it was common to see a black and white head sticking out the window of the red truck. But eventually the dogs began to disappear from the workforce altogether, their legacy living on in red, white, and black imagery. Today, Dalmatians are rarely, if ever, seen among a firefighting crew. The Saranac Lake Volunteer Fire Department is one of the few that still maintains this tradition of having the spotted dog in the station. This particular department has had six Dalmatians in total dating back to their first in the 1950s. All the dogs are cleverly named “Smokey.” While they no longer have to run beside a horse drawn fire apparatus, Fire Driver Rick Yorkey says the Dalmatians often help teach fire prevention to kids. Smokey #5 even used to stop, drop, and roll! Yorkey believes, “As long as there’s paid drivers here, I believe there will be a dog here.” Even those stations without dogs still appear to recognize the benefits of having such a canine companion. Ralph Difonzo, Firefighter/EMT for the Hamden Fire Department, says:

We don’t have a dog here at any of our stations. But everyone thinks having a dog is a great idea…I think a [fire station] dog would be great for emotional support and morale. I personally love dogs and have two, so I know that, at the end of the day, that dog is happier than ever just to see you no matter what. So when we come back from a bad call—a death or a fire—having that dog in the station to comfort the guys would be extremely beneficial. Firefighters with Fire Department New York City’s Ladder 20 seem to share the same sentiment; they recently paid tribute to the life of their dog Twenty, a Dalmatian who helped the FDNY cope in the midst of the 9/11 tragedy. So even if there might be no physical labor left for these dogs, it is evident that there is still work for them to do in the hearts and lives of their coworkers. I wouldn’t keep their adorable paws from prancing around the station, just yet.