Home » Fun » This Cartoonist Wrote A Book About How Dogs Are People Too, And It’s Hilarious

This Cartoonist Wrote A Book About How Dogs Are People Too, And It’s Hilarious

If you’re an avid BarkPost reader or have a pup that gets monthly BarkBoxes, you’re pretty familiar with our dog doodles. That ‘lil dog on the couch reading the paper in the BarkPost logo? Those dogs yippin’ and yappin’ around the BarBox? It’s a vital part of our pawsonality. So, it’s only fair we introduce you to the person behind them. Readers, meet Dave Coverly, Bark doodler and cartoonist extraordinaire! We sat down to chat with him about dogs, doodles, cartoons, and his brand new book, Dogs Are People, Too.

BarkPost: Have you always drawn dogs? Has it always been something that you doodled as a kid?

Dave: Yeah, actually I think that’s been one of my favorite things to draw, since I was little. We got a dog when I was in third grade and every kid wants a dog. My grandpa lived in Detroit and he brought over one of the feral dogs that wouldn’t leave him alone. He knew I wanted a dog, and my sister wanted a dog. And this dog was a mangy little mutt, like a West Side Story dog. I think I saw dogs as being quirky and full of personality at a really young age and it’s something that I just drew. 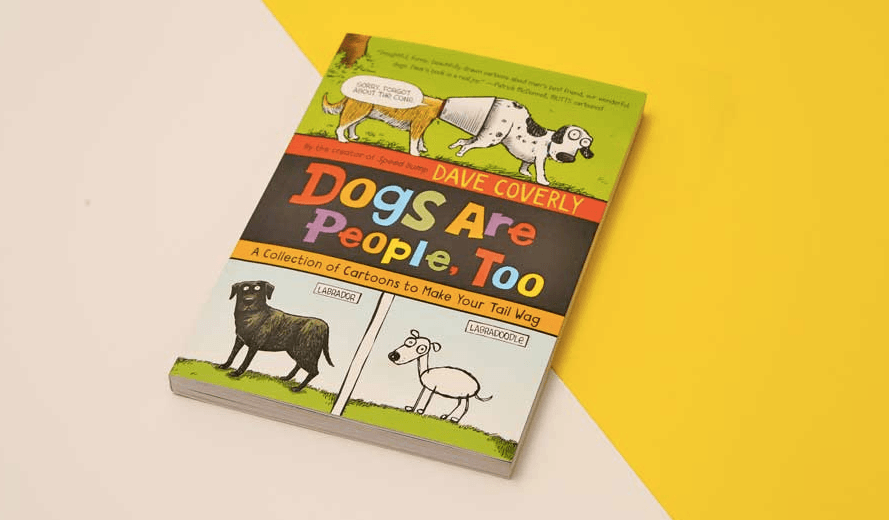 BarkPost: Your cartoons are hilarious and pack a witty punch in doge form. How do you come up with the concepts for your strips? I mean even the cover of your book induces chuckles!

Dave: I think a lot of it has to do with the fact that I’ve always been around dogs and spent a lot of time with them. You kind of get a sense of what dogs are like in general, so if you put them into a specific situation, you project out what might happen in that situation. Dogs to me, above all animals, are the most personality-oriented, if that makes any sense. I think all people kind of project their own feelings on the dogs and so there’s a similarity there.

Dogs really want to know what you want them to do. They really pay attention to how people are behaving. I think the fact that they have personalities really lends itself to cartoons like that. BarkPost: Do you ever do other animal jokes?

Dave: Oh yeah I do tons of animal jokes. When you draw a cartoon you don’t really start looking for the joke. You start with the subject matter, what the cartoon’s going to be about. When you use an animal to bring out a human characteristic or something that we all have in common, it’s not just absurd. It allows you to say things that you couldn’t have a person say, because it might hit too close to home. Like, it’s funnier when a male dog and female dog are having a conversation about their relationship. It gives you one more layer of distance to make the joke. But if it’s people, it’s normal and could get a little uncomfortable. BarkPost: Are there any easter eggs in the book? Hidden jokes? Something for our readers to look out for?

Dave: Oh yeah, there are a couple of BarkBox references in there. I snuck ’em in! And a couple of doodles that are on your office walls!

You can purchase Dave Coverly’s book, Dogs Are People, Too here.