Home » Fun » Puppies With “Some Of The Worst Mange Ever” Get Adorable Names, Wonderful Second Chances

Puppies With “Some Of The Worst Mange Ever” Get Adorable Names, Wonderful Second Chances

These puppies have such inflamed skin that they're hot to the touch. Kristina Rinaldi, executive director of the no kill shelter Detroit Dog Rescue, says the half-dozen pups have some of the worst mange she's ever seen. And that's why she's got them in her shelter. "We take anything and everything from our city's animal control and off the streets of Detroit to give them a second chance," Rinaldi tells BarkPost. Rinaldi found out about the pups after they landed in Detroit's city shelter on Tuesday night. Their previous owners didn't have the resources to get them well, explains Detroit Animal Control's new director Melissa Miller - who came into the job last month promising to increase adoptions and cultivate relationships with rescue groups. [bp_related_article] Because the little ones are so young and sick, Miller worried they wouldn't make it in the shelter. "I alerted Kristina because I knew DDR and their volunteers would give them all the love and medical care - and sweaters! - they need," says Miller. "I am so thankful for the rescues and shelters that have come forward to help transition dogs from Detroit Animal Care and Control into their forever homes." The forever homes - and also, possibly, the sweaters - are a while off. The puppies still have to get through the worst of their infections before they can even be placed in the foster home that's waiting for them, let alone be adopted. The treatment and process will be long, but it's worth it, says Rinaldi. "It's so important to help these dogs, because it is these cases that are usually looked over in shelters," she says. "Considered untreatable and euthanized." Here's a bright spot, in the meantime. The itchy six have already been given ridiculously cute names that both speak to their current condition and also promise a lighter, happier, far less uncomfortable future. Now these pups are called Wilbur, Piglet, Charlotte, Petunia, Paisley and - yes, it kind of kills us - Pinky. 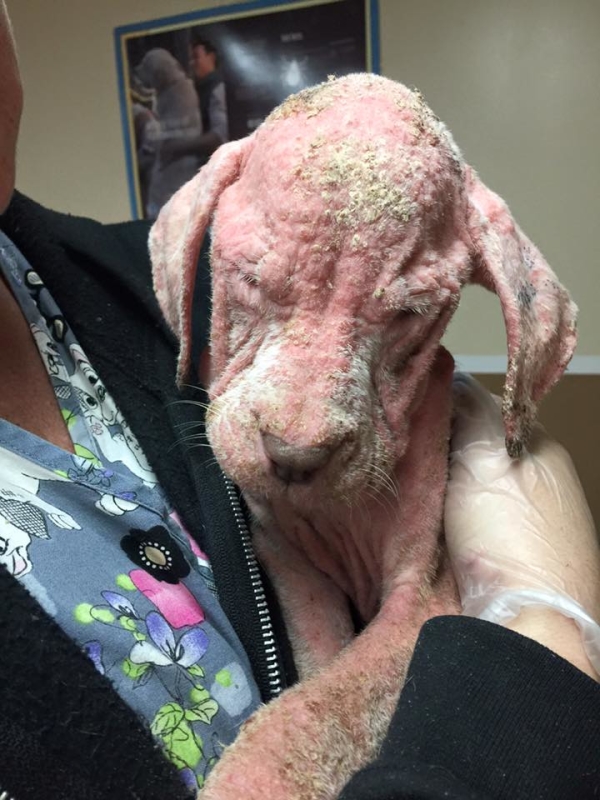 Follow these puppies' progress on the Detroit Dog Rescue Facebook page. Here's where you can help donate to their care. And get in touch at [email protected] if you have a dog story you'd like to share!