Home » Fun » Do Rescue Names Play A Role In Which Dogs Are – And Are Not – Adopted?

Do Rescue Names Play A Role In Which Dogs Are – And Are Not – Adopted?

“What’s in a name? That which we call a rose by any other name would smell as sweet.” — William Shakespeare

So why are people so up in arms over Mr. Bones & Co. naming a litter of pups after the Democratic Presidential candidates? How much bearing does a dog’s name have on the adoption process? Has being named after Hillary Clinton or Bernie Sanders been a defining factor in whether or not these puppies have found homes? BarkPost decided to do some investigating.

The Democrats are Shepherd/Hound/Pit Bull mixes that were brought to Mr. Bones & Co. via the Faithful Friends Animal Sanctuary in Salisbury, NC. They were the product of backyard breeding where the owner was reported for selling the puppies under eight weeks of age (something that is detrimental to their health because they are weaned from the mother too early).

Mr. Bones & Co. founder Elli Frank told BarkPost that the backyard breeder had been selling them at the end of his driveway for $40 apiece. He willingly surrendered the four remaining puppies and Mr. Bones & Co. transported them to NYC once they were ready to find their forever homes. We spoke with Elli first about how naming Mr. Bones & Co. puppies after popular characters and celebrities began. She told us that she has a full-time job outside of rescuing as a marketing coordinator for special events, and that background in marketing led her to think outside of the box in terms of drawing attention to these pups in a world that is already teeming with dogs looking for homes.

It was also an easy and fun way for them to think up names for litters of puppies in order to promote them together. This helps to create a story that is entertaining and relatable to those following the page. Even if the people watching these stories unfold aren’t necessarily interested in adopting a dog, they are more willing to share the posts which in turn reaches a wider audience and more people who are looking for a canine companion.

This hasn’t been the first time by far that Mr. Bones & Co. have named their pups after recognizable figures, nor has it been the first time they have received hateful comments regarding anything ranging from their adoption requirements to the dogs they are trying to help. However, the backlash from naming these pups after the current President and the Democratic candidates reached such epic proportions that the first post practically went viral. The comments on naming the pups after Hillary, Bernie, Martin, and Barack were divided and heated, much like the rest of the debate. People voiced their opinions on disliking certain candidates and telling Mr. Bones & Co. that they should change their names for the sake of the pups. The site had to be monitored to delete the worst of them, which included bigotry, racism, and sexism. People even sent them hate mail accusing them of being paid off by the Democratic National Party to name the dogs after their candidates!

Mr. Bones & Co. finally issued a statement on their Facebook page to quiet the masses:

We would like to address all the vile, hateful, ignorant, mean comments and all the cyber bullying this playful post about four homeless puppies has elicited. We have no political agenda beyond simply needing to make these four puppies stand out in a world where there are too few homes for a never ending supply of homeless, abandoned, neglected, and abused animals that we deal with every day.

To those people who have messaged us to say these puppies ‘will never get adopted now’ or that we ‘ruined their chances of finding a home,’ you are wrong. There are bigger people than you out there and they are kind and see this post for all that it is – a cute story about adorable puppies in need of a home, a beautiful photo shoot [by famed photographer and rescue activist Sophie Gamand], a decision to make these puppies recognized and stand out, to find wonderful homes.

The hate-filled, racist and bigoted comments that we have have deleted and that continue to come in will not succeed in making us delete this post or rename these puppies. If we had more puppies, they would have been named The Republicans. Thankfully, there are only four pups in need with this litter. If you are a hateful person, please don’t leave a comment and bully us, or our puppies. Just move on. We stand behind The Democrats because they are our puppies, and because they simply ARE puppies. If you don’t like who we named them after, then by all means, don’t vote for them.

Contrary to all the haters that told Mr. Bones & Co. that the dogs would never be adopted with this name or that, all of the puppies have gone to loving homes. Being a Barack or a Bernie didn’t stop their owners from looking past their namesake to see them for what they are – adorable puppies, duh! Score one for Mr. Bones & Co.

The truth is, a large percentage of people change the names of their rescues after they adopt them. This growing trend of naming homeless dogs in need after celebrities has been a successful marketing tool in drawing attention both to dogs looking for homes, and dogs rising to their own celebrity status (Chloe Kardoggian, anyone?). As Mr. Bones & Co. stated, it links in with people searching for the celebrities themselves and draws people to their stories. Plus, it’s cute and creative! Elli told BarkPost that as far as their own adoptions go, it’s about a 50/50 split as to whether or not adopters choose their own name once they take the dog home. She said it actually leans in the direction of people keeping the names they choose, which she is “weirdly proud of.”

“When we rescue these dogs, their name is usually the first thing of their own that they have ever had. It’s something that we want them to be excited about.”

It is for this very reason that Elli and the rest of the Mr. Bones & Co. “pack” put a lot of time and effort into finding the perfect name for their pups. They have a text chain where they discuss names and ideas for the dogs and litters of puppies that they rescue.

Elli’s “work wife” Marissa Grimshaw has an ever-expanding list of “expectant” names on her phone, much like the kind an expecting mother would have. The ladies use the time that they spend transporting pups from place to place as “office time” to discuss name ideas as well. They take this job very seriously, which is why Elli is proud of the fact that their rescue names are kept more often than not.

At the same time, The Democrats have been looking for homes, another litter of six puppies were doing the same. Their name? The Friends! 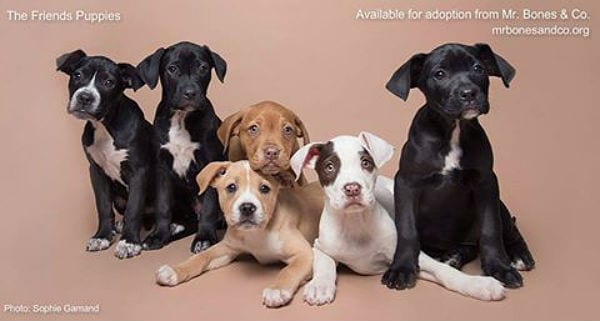 Also transported from Faithful Friends Animal Sanctuary, the six puppies (Ross, Rachel, Phoebe, Joey, Monica, and Chandler) had actually been part of an accidental litter of thirteen! Talk about a crowded apartment! These pups had no problem getting applications, but it’s hard to know whether it was because of their names or if it was because they’re just plain adorable. Mr. Bones & Co. certainly had a much easier time posting them on social media, though, because who doesn’t love the Friends?

Elli did tell us that occasionally the pups will take on the personalities of the characters they are named after. In the case of the Friends, Rachel and Ross were totally in love. Monica (now named Maddie) and Chandler (now named Cooper) were adopted by real-life best friends, so they will continue to be in each other’s lives. As for people wanting to adopt a dog specifically because of a celebrity or character they’re named after? It definitely happens. Mr. Bones & Co. aren’t adverse to homing a dog with someone loving the name and/or character, but they won’t let it be the only reason a person gets to take a dog even if the rest of their paperwork is good.

They have received applications before stating that the person wasn’t really looking for a dog, but they just loved who they were named after so they wanted that dog. Which is a respectful no, because if a person isn’t looking for a dog and takes one home, there’s a good chance that it could end up being returned.

Of course, not all of the dogs Mr. Bones & Co. rescues are litters of puppies, nor are they always named after celebrities. When they do come with a name, Elli tries to incorporate that name in some way out of respect for the previous owner or rescue, such as in the case of Princess Grace. Her original name was Princess, so they added Grace as well to dub her Princess Grace due to her stoic, grateful, and above all graceful nature. All of the dogs listed in this article have already graduated to their forever homes, but that doesn’t mean that your chance to adopt one of their awesome celebu-pups isn’t just around the corner. Their next group of puppies coming in are mom Lucy and the Peanuts (Charlie Brown, Marcie, Peppermint Patty, Sally, and Snoopy)! Be sure to follow their story on the Mr. Bones & Co. Facebook page and Instagram. You can check their website for other adoptables and to make donations here so that they can keep rescuing all the pups.

And don’t worry — we know they have some good names in the works, but we’re pretty sure they won’t be naming dogs after politicians again anytime soon!