Home » Fun » Can Your Pup Actually Understand What You’re Saying? The Results Are In!

Can Your Pup Actually Understand What You’re Saying? The Results Are In!

We all speak to dogs. Though none of us may speak dog (I don't care what you say, Cousin Ralphie!) and dogs may not speak English (I don't care what you say, Goofy!) there is an inherent understanding between hoomans and pups. What's the root of it, though - and where is the line drawn? Your dog shows guilt after you reprimand him for licking up grandma's delicious apple butter, but can he also understand every word as you read Fifty Shades out loud? Soon. Image via terriblyterrier[/caption] New research conducted at the University of Sussex suggests that while dogs may not fully grasp the meaning in every bit of human speech, they may have a solid handle on the emotion behind it. Similar to visiting abroad and not knowing the language, we can communicate through enough emotion to get certain points across and hopefully be successfully led to the Louvre men's room. A study, co-authored by doctorial candidate in psychology Victoria Ratcliffe, looks to determine just to what extent pups "get your gist." The study went a li'l something like this: - 250 dogs of all breeds, age, and size were brought into a lab. (Was it a black lab? Lol, I gotta call the New Yorker!) - The dogs were placed in a room with a speaker on either side of their head. - From there, a few sound clips were played. 1) A clip of their owners saying "Come on, then!" (Classic British people) but with the emotion removed electronically and the sound distorted. In other words, they couldn't tell WHO said it or HOW the command was being said. 2) A clip of their owners saying the same thing, but with the words completely distorted. In other words, they couldn't tell WHAT was being said, but could focus on the emotion. 3) A clip of static noise. [caption id="attachment_33799" align="alignnone" width="600"]

Image via frontlinepest[/caption] When a dog hears something in its left ear, it is processed in the right hemisphere of the brain. Thus, when a dog turned his or her head to the left, scientists determined that the info was processed in the right brain sector (and vice-versa.)  Results revealed that the dogs tended to look right when they heard clip 1 (just distorted words), and left with clip 2 (emotion + distored words). When the static noise was played, the dogs looked in both directions. What's this have to do with anything? Well, doggies process language in the left hemisphere of their brains. In the right hemisphere, they take in emotional content. And guess what, Sally, so do WE! That's right, humans and dogs share the same basic brain properties. Did I blow your (dog-like) mind? But before you go all ET-Elliot on me... [caption id="attachment_33801" align="alignnone" width="600"] 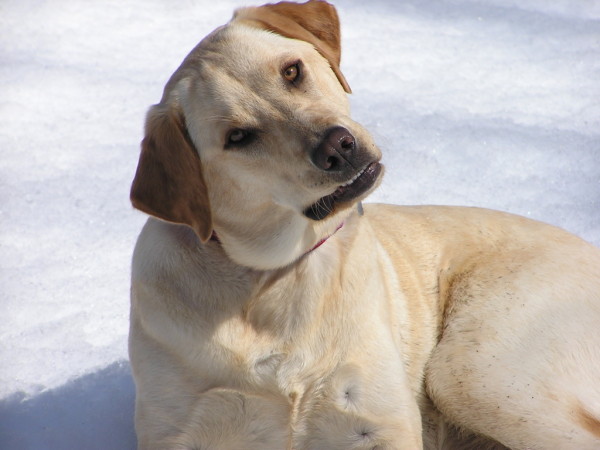 Image via immigrationvisionattorney[/caption] It remains unclear exactly to what extent dogs understand language. "We can say at least that they seem to be getting both the verbal and the emotional, because they have biases for both," claims Ratcliffe. Still, the team plans on follow-up studies that delve deeper into the specificity of your dog's verbal understandings. As you've undoubtedly noticed, dogs respond to people's gaze, posture, and other nonverbal signals. Unfortunately, this makes any effort to truly discern what actual words are being understood pretty difficult, since dogs can chose to simply not follow commands. Until Charles Mintz comes along and invents one of these, it appears as though our inter-species communications shall remain a bit abstract. Then again, maybe this level of communication between hoomans and pupparoos is just right. After all, the system has worked pretty well thus far. And isn't it kind of nice that dogs can't argue with our opinions about Serial or protest that this is the fifth time you've watched a particular episode of House of Lies?
Featured image via gifrific