It’s hard to imagine that the black dog Gricel Guerrero had seen chained in a rural North Carolina yard for the past ten years could someday be a cuddlebug who loves to play. Having spent most of his life forgotten in a corner of his owners’ property, Chico lived his days and nights surrounded by garbage and dirt. 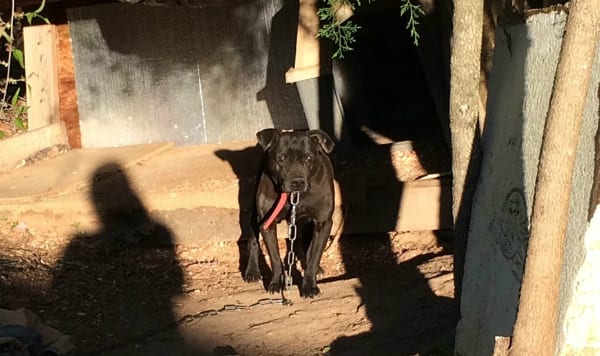 The jet-black Pit Bull had no friends, except one neighbor who remembers the day Chico was brought home when he was just two years old. Guerrero told The Dodo that Chico’s owners “live in a secluded area where the neighbors also neglect their dogs,” making it hard for her to convince them that the way they were treating their dog was inhumane.

At times, Chico would pull until he’d slip out of his collar. Each time, Guerrero would watch her neighbors place the chain around his neck again. Heartbroken, the worried neighbor felt helpless.

I told them the dog needed vet care and daily walks, but they always said the dog was fine, and that he was mischievous and was too aggressive to other dogs to not be chained.

Contacting dog rescues, Guerrero found that those that seemed able to help were too far away. Though she was told authorities would be able to assist in getting Chico out of his situation, Guerrero felt conflicted, knowing her neighbors would get in trouble. “I just wanted the dog to be rescued,” she said. Guerrero found help with Diva’s Safe Haven & Thrift, a group of independent rescuers whose goal is to make sure neglected animals have safe homes. They agreed to take Chico after Guerrero and a few concerned neighbors gathered at Chico’s home to ask his owners to surrender him. After ten years of pleading them to take better care of Chico, Guerrero was surprised to hear the owners say yes. Chico was ecstatic. “He wasn’t taken for walks [in years] so he seemed very happy to be going somewhere,” Guerrero said.

Diva’s Safe Haven was the perfect place for Chico. He warmed up to humans and other dogs quickly, cuddling with his new buddies and enjoying some much-deserved comfy snuggles on a warm bed. He is the sweetest around other dogs, and especially loves playing with small puppies. After a lifetime of neglect, Chico has arthritis in his back legs and is deaf and going blind, but the team at Diva’s Safe Haven is working to get him all patched up and as comfortable as possible so he can continue his life. And when the weather warms up, they’ll be taking him to the river for water therapy to ease his discomfort. One thing’s for sure: Chico will never feel forgotten or unloved again.

For pupdates on Chico and the other animals Diva’s Safe Haven rescue and to donate food or supplies, check them out on Facebook.