Who can forget the story of Caitlyn, the Charleston, SC dog who nearly lost her tongue and her life after having her muzzle viciously taped shut? Over the past year Caitlyn has gone from neglected and abused to admired and adopted. Yet another dog has been subjected to this cruel act, but much like Caitlyn, his life has drastically improved thanks to his rescuers.

Bannister got his name after the Kansas City, Missouri, road where a police officer found him last week, skinny, cold, and alone, covered in thick matts of fur.

Underneath the matted fur on Bannister’s face, veterinary staff found fresh, painful gashes. Someone had tied up the dog’s muzzle, possibly with a rubber band.

By then, the restraint was no longer in place — but it had been there long enough to leave the dog with deep, raw wounds. His mouth was bound for a long time. It cut into the sides of his lips and his muzzle was very swollen. Kansas City Pet Project is asking anyone with information about who may have hurt Bannister to come forward.

Bannister himself, in the meantime, is healing — though the shelter expects his future to entail a host of expensive, extensive medical procedures.

Then, eventually, Bannister will be put up for adoption — finally, ready for the sort of love he’s deserved all along.

Every pet that comes to a shelter deserves a second chance for happiness. And we’re here to guide them along to the life they’ve always wanted. 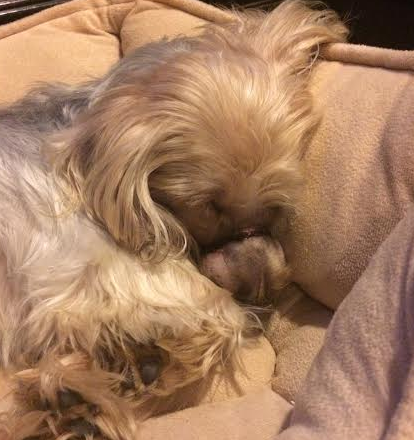 That’s down the line. Now, Bannister is convalescing in a foster home.

There, he is getting lots of love, along with three meals a day — soft food, that he’s gobbling up.

He has canine foster siblings to chase around the yard. Foster mom Esther Rankin reports that Bannister has become a fan of treats, which are readily dispensed.

Bannister’s also quickly become accustomed the pleasure of snuggling on the couch. It’s a lovely repose that he certainly deserves.

We don’t let our dogs on the furniture, but how can you not let this little guy be so cozy and happy like that. He looks like he is in heaven and has never felt so comfortable.