Have you ever looked at your dog and thought, “Wow, sometimes I feel like we have so much in common”? Well, you will be happy to know that there is some truth in that statement. It turns out that 25% of the DNA sequence in the dog genome is an exact match for the human DNA sequence. Wait a minute. Does that mean humans are a quarter dog? Or dogs are a quarter human? As much as I wish that was true, unfortunately, it doesn’t quite work like that. To understand how humans and dogs can share the same DNA, we first need to have a quick biology lesson. Whether you’re a dog or a human, every living thing is made up of the same DNA-base, or building blocks, of A’s, T’s, G’s, and C’s. What makes each person, or species, unique is the order in which these building blocks are assembled. Where you may have an A in spot 15, 1500, and 15,000, your dog may have a T or a G. Not surprisingly, these differences in building block assembly are greater between species, such as the case with humans and dogs, than within a species. Now that our biology lesson is over, you may be asking yourself “If our number of chromosomes, building blocks, and the way they’re assembled are different, how can we possibly share any DNA with a dog?”

The answer to that is simple. Since humans and dogs have so many similar body parts that carry out the same biological functions, we see a lot of overlap in how the DNA for those parts are put together. This is why we have an exact match for 25% of dog and human DNA. It’s also why dogs are used in so many health studies; we have similar parts that are prone to the same illnesses, such as cancer or heart disease. 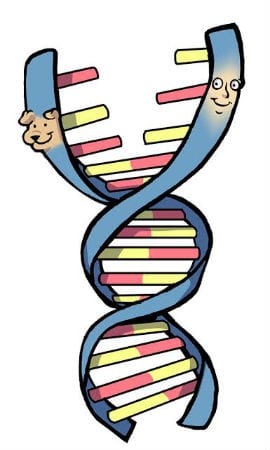 While there is a quarter of our design that is exactly like a dog’s, it’s the small differences in the remaining 75% that result in two very different species. The other 75% of our genes are a mixture of totally unique human DNA and other DNA that is somewhat similar to a dog’s.

All in all, while humans and dogs do share 25% of their DNA, the remaining 75% is what really counts. But hey, if it makes you happy you can still consider yourself 25% dog!

H/t to The Tech
All of the gorgeous images above were illustrated for BarkPost by Kelly Angel of anythingcomic.com