It has been nearly two years since this video of a dog seemingly attempting to “cover” a fish with water first went viral.

The video, taken in Thailand at what may possibly even be fish market, has garnered all sorts of responses that seem to leave people divided on what the dog is actually doing. As an animal behaviorist, I cringe a bit every time I see people “awww” over the video.

While dogs certainly possess the capacity for compassion and grief, like the story of this dog who stayed at his owner’s grave for six years, there are many logical factors that come into play. For instance, how can a dog know that a fish needs water to survive?

Both Huffington Post and Psychology Today wrote about how it’s more likely that the dog was trying to bury the fish, rather than save it. World renowned animal expert Patricia McConnell, who has written several books on animal behavior, weighed in on her Facebook page that this was “a perfect example of ‘caching’ behavior.”

The reality of the situation might be more apparent to those who own dogs themselves. Dogs bury things. I’m not just talking about a dog burying a bone in the backyard, or a treat in the sofa cushions. My own dog occasionally buries nothing at all, pushing his nose around on his bed, my bed, the carpet, hardwood floor… anywhere.

This commonly happens while a dog is eating, or sometimes after. There are a few schools of thought on this – Some foods may cause allergies, which would make a dog scratch his nose or paws after eating, so always be sure to look for other signs like excessive scratching and irritated paws, skin, or ears. The other school of thought is that this is a deeply embedded instinct from their “wolf” days. Way back before dogs were domesticated, they didn’t know where their next meal was coming from. They buried extra food in a secret spot to keep it safe from other dogs, until they were ready to chow down again. If you have been feeding your dog more treats than he needs, or he has a favorite toy that he doesn’t want to share, he may bury these things like ancestors did. “If you give me that lollipop, I can bury it for you.”

There’s also another practical reason dogs rub their noses all over stuff after eating. They don’t have napkins, and well, how else are they supposed to clean their faces? Wolves and feral dogs instinctively rub themselves in the carcass of a kill as a sign of victory, but they would also have to rub the blood off their noses after feasting – like I said, no napkins.

Gross, right? Just about as gross as when your pup finds a dead animal in the backyard and rubs himself all over it. Even after thousands of years of domesticating dogs as house pets and companions, they are still animals and act predominantly on instinct.

Dogs also have a sense of smell that is probably a thousand times stronger than ours. This makes them a lot more sensitive to odors of all kinds. This makes them want to push their nose around to bury the scent or rub it “off” of their nose. It’s no secret that dogs love stinky things (the smellier the better!), so when a particularly fragrant object like a dead fish comes along, their doggie brains are thinking “JACKPOT!” They want to hide it from the rest of us to enjoy later.

The dog in the video gets more frantic as he tries to cover the fish because water is clear and everyone can still see it. His plans to hide the fish totally fail. So back to the video and why the “aww” reaction makes me cringe. We are attributing more human characteristics to dogs than we should, and this becomes a problem for both us and them.

When we humanize our dogs, we are not understanding how they behave. We’re expecting them to have a level of comprehension that they can’t have. Sometimes, this leads to frustrated pup parents when our dog doesn’t understand why eating chocolate is bad for them and they grab some off the counter, or they keep pulling on the leash to get ahead of the pack even though we tell them not to. Yes, dogs are a part of our family and we treat them as such. Yes, we love them just as much as any human we know, and probably more than most. But no matter how much we dress them up in cute little sweaters and talk to them in full conversations while they tilt their head, the fact remains that they are not human and they don’t think like us. That does not mean that dogs aren’t capable of doing amazing and compassionate things. Dogs have been known to detect cancer in their owners, so much so that they are now being trained to do it in hospitals. They have dialed 911 to save their owners from a house fire or other life-threatening event. Many dogs are trained as service animals to perform all kinds of acts, from anticipating an oncoming seizure and getting medications from a bag, to putting soothing pressure on the chest or back of someone experiencing anxiety. 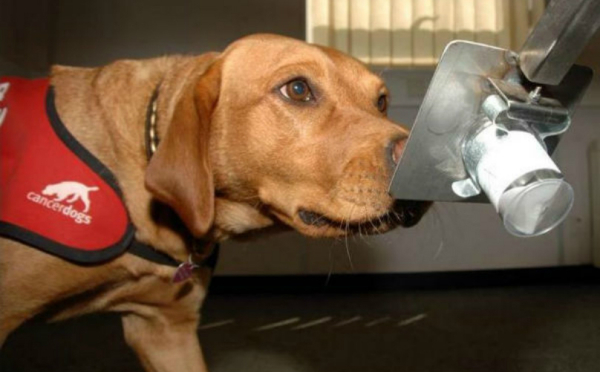 There is no limit to how amazing dogs can be, particularly with training. But the first way to help them realize their full potential is to stop treating them like babies and understand that their brains work differently from ours. Learning to think like them and/or working with an animal behaviorist or trainer will be the best thing you can ever do for yourself and your dog to create harmony in your lives.

Or, you can continue to believe that the dog is trying to save the fish because it is a cute idea.