A long-legged, emaciated Dogo Argentino mix tied to a tree in someone’s backyard was what initially caught the eye of a landlord who owns property in a Miami, FL neighborhood. Upon observing the state of this dog and mentioning it to some of his tenants, the tenants — self-described as always having been “huge dog people” — decided to go see this dog who was a few blocks away.

Arriving at the house, the four roommates — Stephanie, Alexandra, Hugo and Alejandro — approached the dog, giving him food and water. The man who lived in this home soon arrived and confronted the strangers in his backyard. He told them that this was his nephew’s dog and that he “wasn’t interested in taking care of him.” Immediately, the four roommates offered to take this dog, to which the man agreed.

The four roommates next called Animal Control, but upon being told that there was a chance that this dog would be euthanized, they decided to instead welcome him into their home.

Now free from being tethered to a tree with a chance to live the life this dog always deserved, it became time to choose a new name for him. Alexandra came up with the name “Ganesh,” a perfect moniker for this dog whose life had just changed. Stephanie told BarkPost:

“[W]e all loved it because in Hinduism it signifies the God of overcoming obstacles who paves the way for a new beginning. We all felt it was very fitting for a boy who had a whole new life ahead of him.”

Once rescued, Ganesh received a much-needed bath, removing dirt and fleas. Ganesh was also treated to a something of a doggie spa day with a post–bath coconut oil rubdown. Along with his new beginnings, it was apparent that Ganesh needed medical attention. However, it wasn’t clear how extensive his needs would be. Stephanie set up a GoFundMe account for Ganesh and donations began pouring in, so much so that within a day they had raised so much that they decided to close the donations as they “felt it was enough to care for his medical needs and other expenses.” As it turned out, besides needing to gain muscle, be neutered, and get rid of an ear infection related to a mild case of ear mites, Ganesh was in surprisingly good health.

Overwhelmed and grateful by the incredible support shown for Ganesh, these four roommates want to help pay forward the kindness shown to Ganesh. They told BarkPost:

It seems as if the other furry creatures in Ganesh’s new household are already paying it forward, showing their new foster brother how to cuddle and play. Ganesh now has four siblings — Simba, a Labrador; Piper, a German Shepherd; Leighla, a mixed breed and KitKat, the little cat who is still warming up to Ganesh. We here at BarkPost are hopeful that by sharing Ganesh’s story, KitKat may want to start cuddling up to her now-famous foster brother a little bit more. There’s hope for you yet, KitKat. 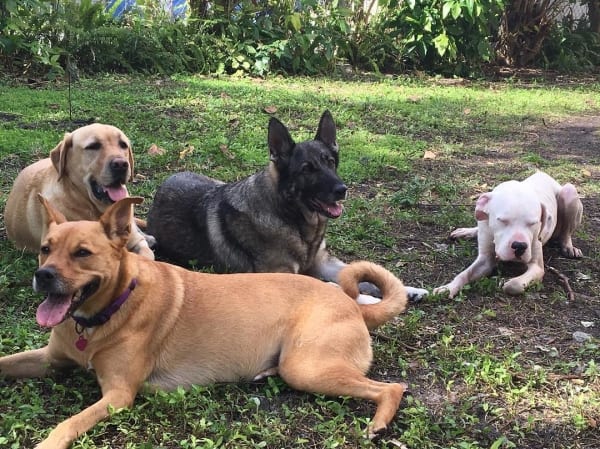 In addition to palling around with his new siblings, Ganesh spends his days cozy in his new bed, snuggling with his four new humans and following all of them around the house. He’s also been enjoying the South Florida “winter” with trips to the beach and dog park, making friends with both dogs and humans. And in what seems to be a common trait in larger dogs, Ganesh also believes he’s a small lap dog and loves to fall asleep in Stephanie and Alexandra’s laps. Another speciality of Ganesh’s? Hugs. Lots and lots of big hugs.

“Every time we enter the house he greets us with a hug[.] [H]e stands on his hind legs and puts his front paws at our waist[.] [I]t is such a good welcome to come home to.”

We here at BarkPost clearly agree.

Now Ganesh gets to experience what every dog should.

“Ganesh came into our lives afraid and never having experienced compassion before. The most beautiful experience so far has been the endless gratitude and loyalty he has shared with each of us. He speaks “thank yous” with his loving eyes every time you look at him…. All that matters to him at this point in life is giving and receiving more and more love. Well, that and food!”

Eating seems to be another one of Ganesh’s favorite pastimes. In a week-and-half, this big boy has gained about 10 pounds, eating “four small but hearty meals” every day. The transformation that Ganesh has shown is striking.

“Ganesh was very anxious and yet very low in energy, malnourished, confused. Today, Ganesh is a happy energetic boy who is learning good manners, [he’s] well-behaved and has so much love to offer.”

While Ganesh is now safe, loved and enjoying the comforts of a real home, it’s not entirely clear if he’s found his permanent home. Stephanie told BarkPost:

“Alex and I are completely in love with the idea of being his forever humans, but we are keeping the possibilities open for now.”

No matter whether Ganesh is to be a permanent family member or a foster dog whose life was saved the day that he was untied from that tree, it’s very clear that Ganesh is exactly where he’s supposed to be at the moment -a home where he is loved, safe and able to give his humans all of the hugs his two front paws desire.