Pawesome news New Yorkers!! On Monday October 26, Governor Cuomo signed into law a bill that gives restaurants the right to allow dogs to dine with their owners. As we previously reported, the law only permits pups dine in outdoor areas of restaurants and only if no food is prepared in those areas.

No longer will our beloved companion animals be relegated to staying at home while we enjoy outdoor dining. Now they can simply come with us, like any other family member.

This great news for pawrents of New York pups! For more information on the law and statistics on the health risks of dining with dogs, read our previous updates and original article below.

Update 6/7/2015: On June 2nd, the New York Assembly Health Committee passed the bill that will allow dogs in outdoor seating areas of restaurants. This puts New Yorkers one step closer to dining with their dogs.

The bill was previously approved by the New York State Senate.

However, The New York Daily News reports that the NYC Health Department is advocating against the legislation.

Christopher Miller, a spokesman for the health department says:

“The Health Department loves all dogs, but just not at restaurants where they can create a risk to the health and safety of diners, restaurant workers and other dogs.”

One of the bill’s sponsors, Assemblywoman Linda Rosenthal, fired back calling these worries misguided. 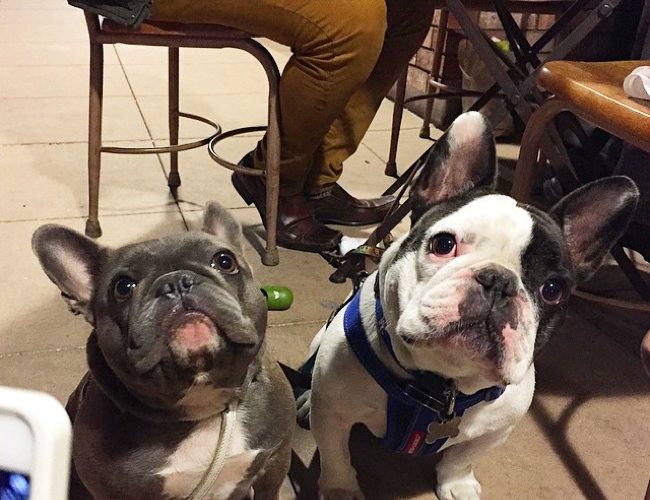 As we reported earlier, a 2013 study showed that having dogs in outdoor spaces, where food is not prepared, posed minimal health risks to humans. Another study noted that most potential risks occur when pets are in an environment that does not have adequate ventilation. This would not apply to the proposed bill, which only permits pups in outdoor areas.

“This dining with dogs has been the law in California for almost half a year, and there have been no reported incidences. It’s also the law in many European countries.

This is also the law in many states other than California. Although the Assembly Health Committee gave the bill its stamp of approval, the Assembly Codes Committee must agree to the legislation before it makes its way to the governor’s office, which is the final step.

If you’d like to help to make it possible for every member of our families to dine with us in New York, contact members of the Code Committee and write to Governor Cuomo showing your support. Imagine this: You’re having a super pawsome day. The weather’s gorgeous beyond belief. You look fantastic. You’ve got your furry bff by your side and the two of you have worked up some serious hunger sauntering the streets of New York.

It’s time to find some chow. You spot a restaurant with some stellar shade and cozy looking outdoor seating. You and your pup walk on over, sit down and order some grub to continue your best day ever! Sounds amazing, right? It also probably sounds like a pipe dream to dog lovers in New York and other states where pups are pawsonae non gratae.

But this dream might not be as far-fetched as you think. On May 13, the New York State Senate passed a bipartisan bill allowing dogs into the outdoor seating areas of dining establishments.

This dog-friendly news comes with a few rules, of course. Pups must be leashed and they cannot sit on your lap or in a chair next to you. To keep all diners comfortable, these dog friendly seating areas must have an outdoor entrance. This way, you and your pup don’t prance through the inside of the eatery and disturb any guests.

There are a few caveats, however. Dogs aren’t permitted in outdoor sections where food is prepared. Remember, not everyone is accustomed to fur in their meal. Also, it’s 100% up to the discretion of the restaurant whether or not they allow dogs to sit in these spaces.

Considering a 2013 study showed that it’s unlikely eating outdoors with a pup would pose a health risk, odds are you’d be hard pressed to find a restaurant that doesn’t love dogs. The bill isn’t law yet. It still needs to pass the State Assembly. The bill’s sponsor, Assemblywoman Linda B. Rosenthal, has little doubt that it will pass before the end of next month. She’s a strong believer in the support of her dog-loving constituents.

She tells The New York Times:

“People who have animals are the most prolific email writers and callers. They’re persistent.”

This is where you come in, motherpuppers! If you’re in New York and would ruv to dine with your dog on a beautiful summer day, call or email your local assembly member and share your support for the bill. Even if you don’t live in New York or a dog dining friendly state, you can still contact your local officials to advocate for similar legislation.

After we work to live this dream, let’s advocate for more pup pawsitive laws! Maybe a special off-leash day in city parks?