Home » Fun » Why Does This Incredibly Rare Dog Breed Have Two Noses?

Why Does This Incredibly Rare Dog Breed Have Two Noses?

On a trip to Bolivia a few years ago, explorer Colonel John Blashford-Snell met a dog named Xingu who had two noses. You see, Xingu was a rare Double-Nosed Andean Tiger Hound, a breed named for their unusual split (or doubled) nose. 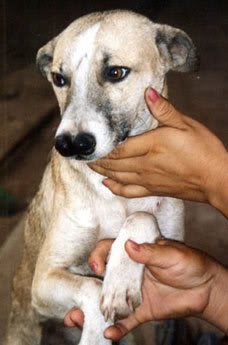 Blashford-Snell remembered meeting Xingu’s mother, Bella back in 2005, and when he returned from his trip, told BBC’s Today, “While we were there, sitting by the fire one night, I saw an extraordinary-looking dog that appeared to have two noses. I was sober at the time,” he said. “Then I remembered the story that the legendary explorer Colonel Percy Fawcett came back with in 1913 of seeing such strange dogs in the Amazon jungle. Nobody believed him, they laughed him out of court.” Xingu was checked by a veterinarian who confirmed the pup was not born with a cleft palate. The unique family’s canine ancestry is believed to have originated when Spanish conquistadors brought Pachon Navarro hunting dogs to South and Central America back in the 16th century. But the truth behind their two-nosed appearance remains a mystery. Despite how it looks and what conquistadors believed, double nosed dogs do not appear to have a superior sense of smell. Well, no more than other canines, that is. However, Blashford-Snell had some observations of his own on the breed.

The explorer said Xingu (who is best friends with a wild pig name Gregory) was “quite an aggressive little chap, who loved salt biscuits, but wasn’t a terribly handsome dog.”

A face only Bella could love pawhaps? Nawww, Xingu! We think you’re beautiful just the way you are! Looking at you is like looking into the most adorable double barreled shotgun in the whole, wide, world! 🙂

And if you find yourself in Bolivia any time soon, keep your eyes open in the markets and maybe you’ll spot one of these two-nosed wonders!