Sirius the dog and Sam the duck are longtime best friends that wound up in a Texas animal shelter together. Although they were obviously deeply bonded to one another, they ran the risk of being split up if no one came forward to adopt them. [bp_related_article] Arkansas animal rescuer Whitney Ransom---director of Southern Paws Transport---heard about the buddies. She fretted about them losing each other, she says, because "how do you adopt out a dog and a duck?" By sending them home to Ransom, is the answer. 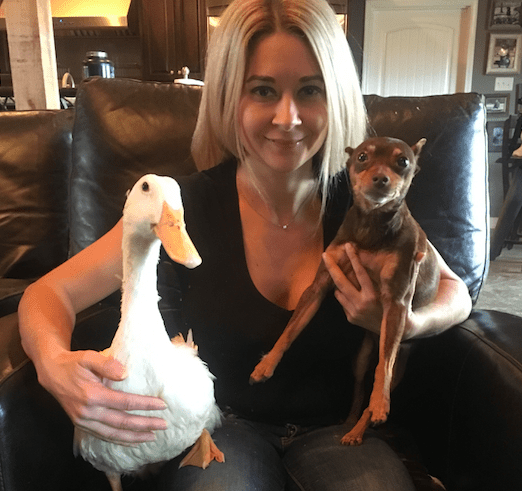 Ransom lives on an expansive property, with a big private pond that's already inhabited by 15 tame ducks. When Sam and Sirius joined the household, about three weeks ago---driven to Arkansas from Texas by volunteers---Ransom assumed that 12-year-old Sirius would stay indoors, and Sam would join the outdoor flock. So far, however, Sam seems thoroughly uninterested in that prospect---just one way he defies expectations. "This duck doesn't want to be near water," says Ransom. Instead, Sam follows Sirius around the house. If Sirius is on a dog bed, that's where you'll find Sam. If Sirius is in Ransom's lap, well, the little dog had best shove over a bit, because here comes Mr. Duck. "The duck loves the dog," Ransom observes. Sam being Ransom's first indoor duck, there's a bit of a learning curve here. Ransom hasn't yet picked up a very useful invention: the duck diaper. (Luckily, the house has concrete floors, which makes for easy cleanup, since ducks don't get house trained.) There is also another, trickier matter... Ransom hunts ducks. She, of course, has no trouble distinguishing between a pet duck, which is not to be hunted, and a wild duck, which may be. Her hunting dogs don't make that distinction quite so intuitively. Those interactions must be closely supervised and controlled in order to ensure Sam's safety. Overall, it's been a lot of fun having Sam and Sirius around. Ransom recently had some friends over the house, and Sam ran about entertaining her guests. "He was the hit of the party," she says. Now that she's gotten used to the idea of Sam living inside the house, Ransom is contemplating how to make his life safest and most enjoyable. She's thinking of converting a spare bedroom into an enrichment-filled duck habitat, for example. And who knows what other changes will come about because of her new furry and feathered family members. The main lesson so far, after this short time, is that it's extremely hard to predict what having a pet duck, who loves a little dog, will do to a a household. "It's been an adventure," says Ransom. "I can't make this up."
Featured Image c/o Whitney Ransom