Short spine syndrome is a rare genetic condition in which a dog’s spine is literally shortened. They are born this way. These dogs all share similar traits, such as sloped backs, short, wide necks, rear legs that are longer than the front legs, elongated jaws and either no tails, bobbed tails or shorter than normal tails. They are also smaller in stature than a dog typical of their breed type. Speaking of breeds, this syndrome is not limited to any breed type. The condition also isn’t limited to location, as these dogs live all over the world. It is said to be caused by inbreeding.

Short spine syndrome dogs are not in pain. They live active and happy lives. The oldest one was nearly 14 when he passed away. They are loving and fun and feeling sorry for them should not be an option. So, let’s meet them!

Cuda is a Staffordshire Bull Terrier who is six years old. She actually belongs to me and has since 2010! She lives in NY and is the only short spine dog who is also a certified therapy dog. Cuda also has diabetes, which is not believed to be caused by having short spine syndrome since she is the only one of the bunch who has it.  Follow her at Cuda Cares on Facebook. Quasi is a mixed breed dog who lives in Italy. She is nine years old. Her picture circulated the internet with a story that she looked this way from growing up inside a small box. Nope. She looks this way because she has short spine syndrome! Her owner, Fabiana Rosa, adopted her in 2010 and named her rescue after her. Follow her at Progetto Quasi. Mojo belongs to Maria Rall in lives in Ohio. She adopted him from a local shelter in 2012. He appears to be a Border Collie-type dog and was also the first male short spine syndrome dog to be discovered. Pig was just a small puppy when her owner, Kim Dillenbeck, found her two years ago. She is a mixed breed dog who lives in Alabama. You can join her huge fan base on Pig the Unusual Dog. Cleo is a mixed breed dog who is three years old. She lives in Wisconsin with her dad, Brandon McDonald. Brandon actually had adopted Cleo’s sister Molly Faith first. Sadly, Molly Faith passed away when she was still a puppy. At the same time, the person who adopted Cleo couldn’t keep her and Brandon gladly brought her home. Quasi Modo is a mixed breed dog who lives in Florida with veterinarian Virginia Sayre and her husband. Quasi Modo has the distinct title of World’s Ugliest Dog 2015. While no one really thinks she’s ugly, winning that title brought recognition to short spine syndrome. You can follow her at Quasi Modo on Facebook. Odd Dog was found in a box with his short spine brother, Gobblin, when he was just five months old. He’s now two. He lives in Italy with his mom, Patrizia Onnis, and also has a page for you to follow. Check him out at Odd Dog. 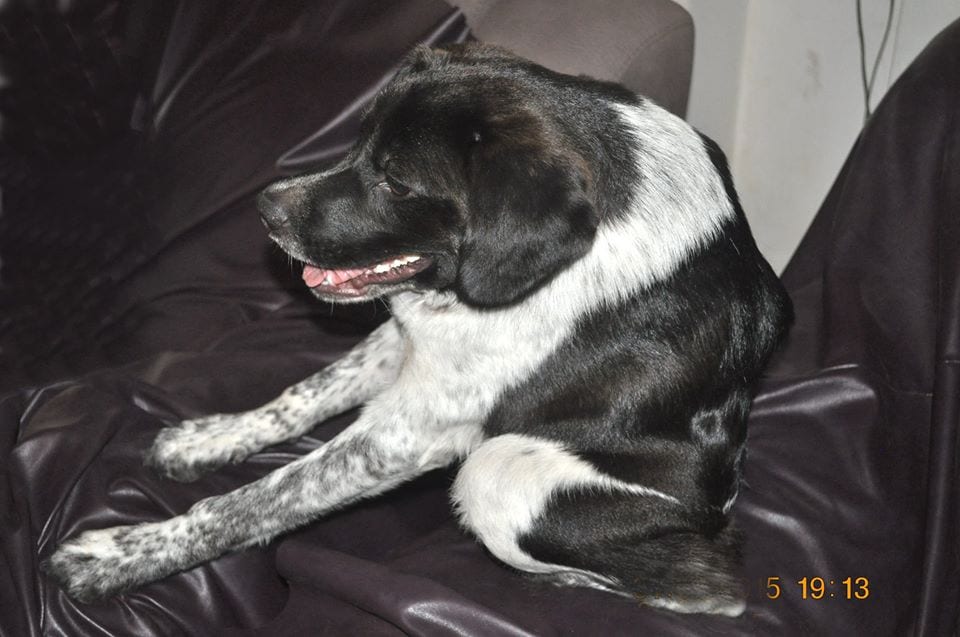 Gobblin is Odd Dog’s brother. Just as adorable, he lives in Italy with his mom, Sonia Porcedda, who is also a volunteer with Progetto Quasi. This picture was taken just after he was found. 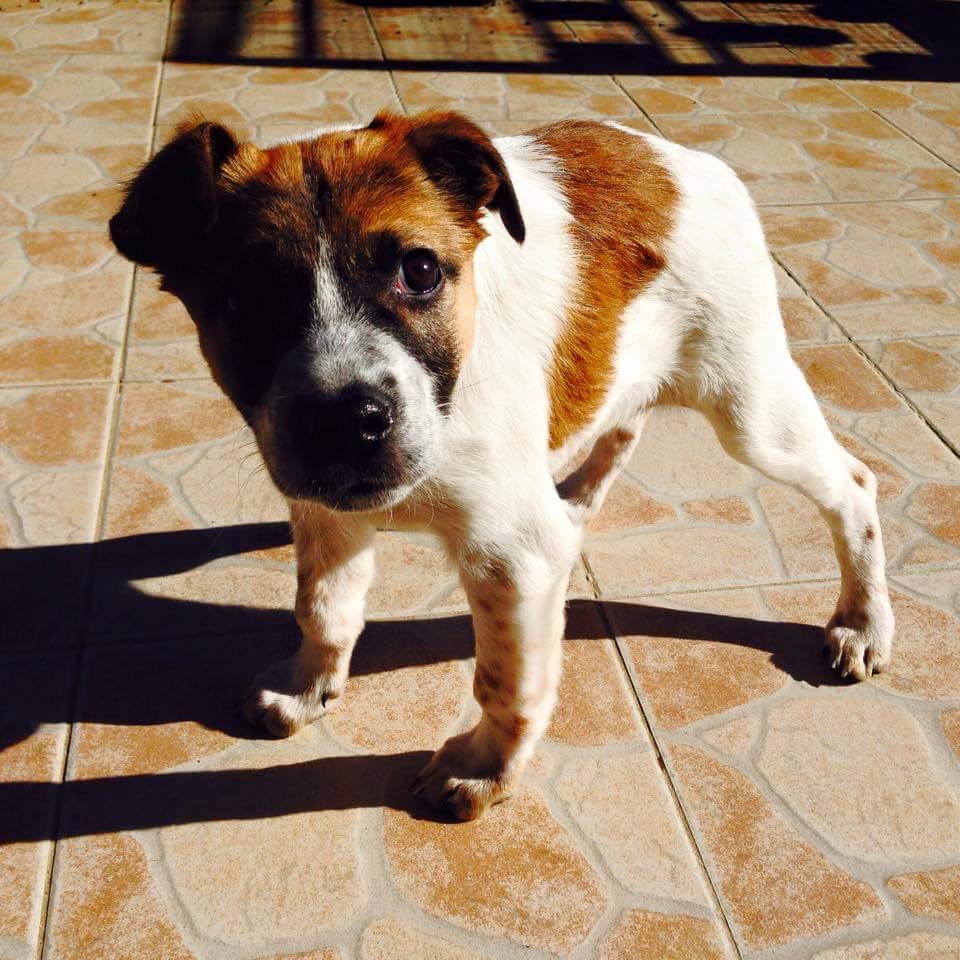 Frankie is a Jack Russell Terrier mix who lives in the United Kingdom. Her mom, Ann O’ Brien, foster failed with her. Can you blame her? Follow her antics at Frankie Says on Facebook. Izzy Belle is the tiniest of the short spine dogs. She is a three-year-old Poodle. Her mom, Angela Lonergan, said her sister is perfectly normal. Follow her on Facebook at Izzy Belle. 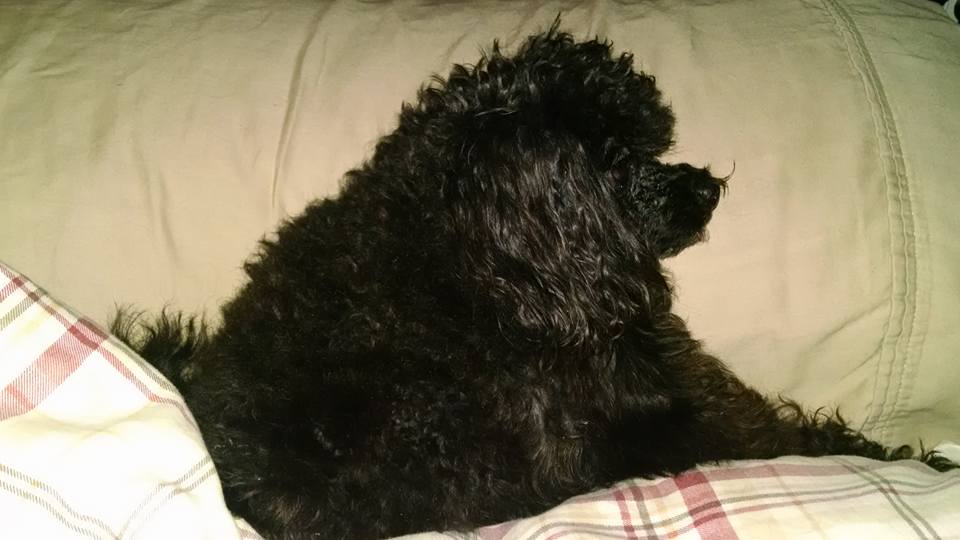 Mina lives in Mexico with her human, Arturo Gof. Incredibly, a year after Arturo found her, he found another short spine dog who he named Vlad! Arturo Gof has the distinction of having two short-spined dogs. Since they were both found as strays a year apart, it isn’t known if they are related. 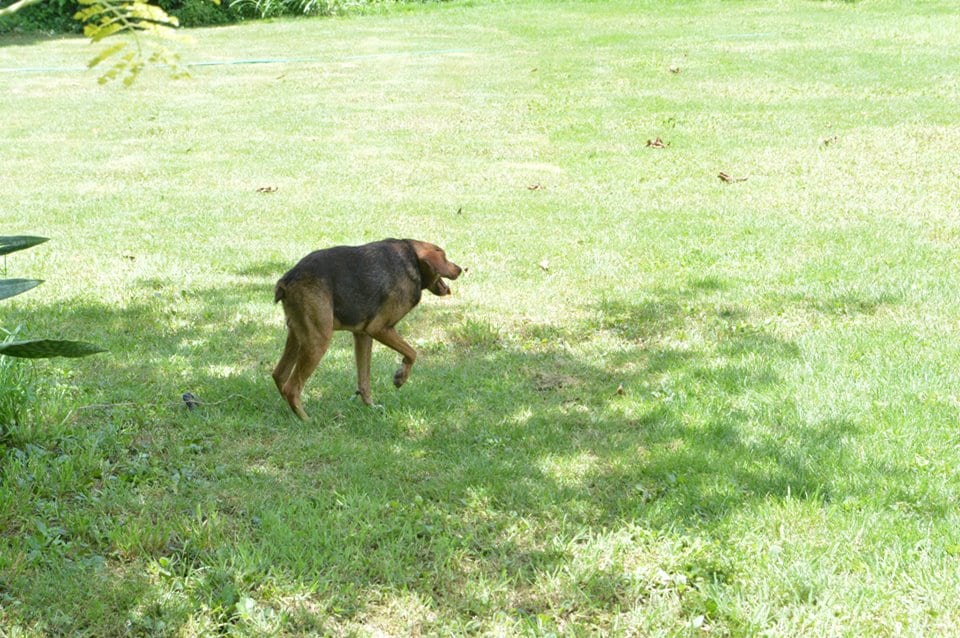 Quasi is a German Shepherd who was pulled from a shelter by Secondhand Hounds Rescue. Quasi blew up the Internet and has become quite famous. He’s currently in foster care in Michigan. You can join his fans at Quasi The Great. Spartacus ended up in a shelter after being removed from a hoarding house in North Carolina. Spartacus had an extremely happy ending. After Mary Beth Goosman lost her beloved short spine dog, Watson (see below), Spartacus became part of her family. He helped make Mary Beth smile again. Spartacus has the longest tail of all of the short spine dogs. Polly is a six-year-old Russian Borzoi who belongs to veterinarian Karen Dashfield. Borzois already have a sloped shape, so it seems exaggerated in Polly’s case. Nonetheless, she is happy and healthy. 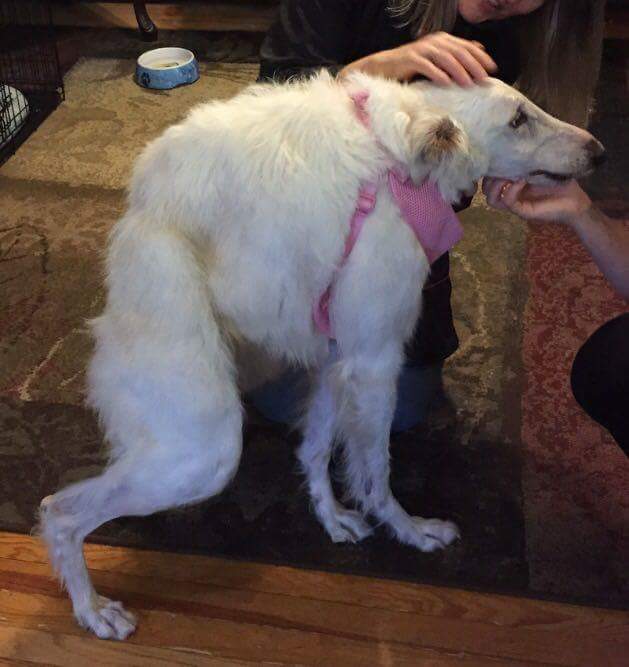 Squishy is the latest short spine dog to surface. He is a one-year-old Plott Hound belonging to Kimberly Munsell in Utah. His long legs really enhance his adorable looks. 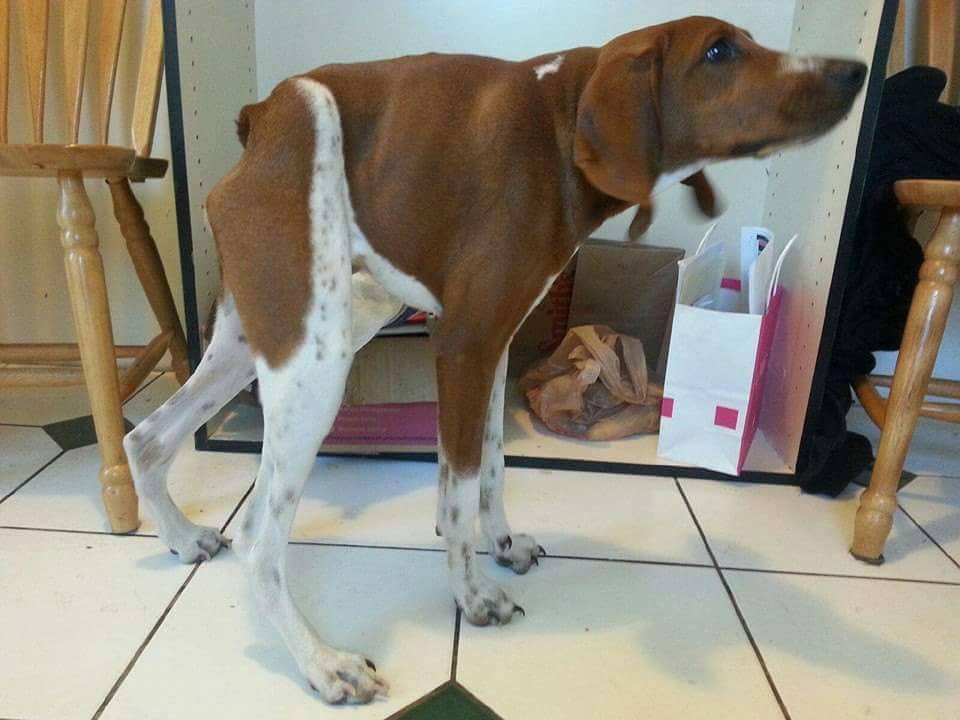 The short spine dog family recently suffered two heartbreaking losses. Although these two dogs are no longer with us on Earth, their spirits remain to watch over their families. Unfortunately, one short spine puppy passed away well before her time in 2012. Still, they are close to the hearts of the humans who loved these dogs.

Watson was a Border Collie-type dog who lived in Maryland and belonged to Mary Beth Goosman. She adopted him when she first met him while volunteering at a shelter in 2010. Watson suddenly passed away this past December just a month shy of his fourteenth birthday, making him the oldest short spine dog. Watson’s long life proves that short spine syndrome is not a death sentence. You can still follow his page at Wise Watson and keep up with short spine dog #14, Spartacus. 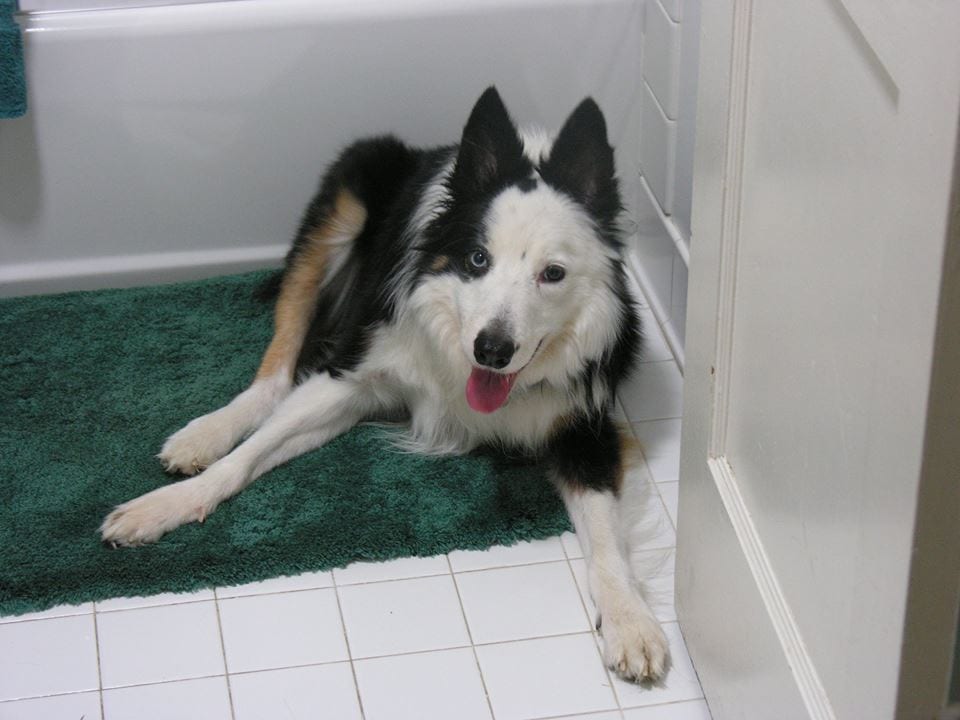 Cricket was also a Border Collie-type dog. She passed away suddenly at the age of nine due to illness. She belonged to Anna Canese in Italy. Criket is missed by all. Molly Faith was just a puppy when she passed away in 2012. She belonged to Brandon McDonald, who now has short spine dog #5, Cleo. 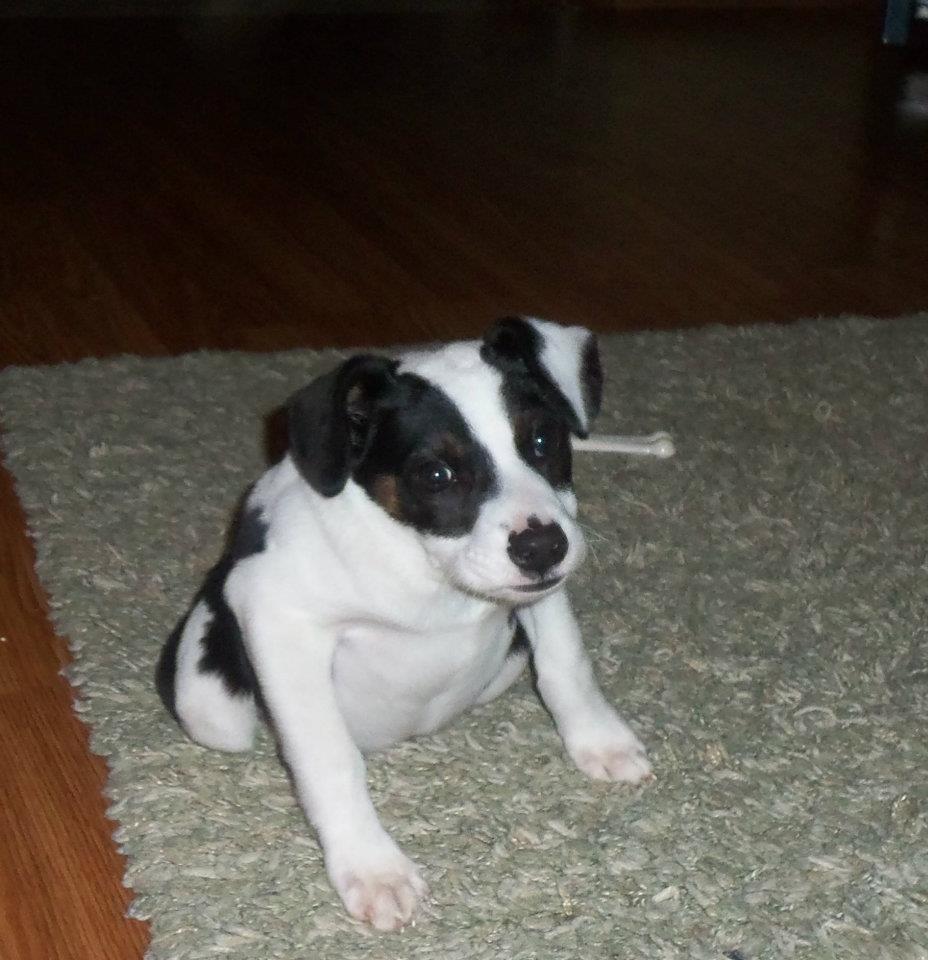 I believe there are many more of these special dogs in the world to be found. Short spine syndrome was first identified as far back as the 1700s. These dogs were seen in abundance in South Africa and were also called “Baboon Dogs” for their appearance. It doesn’t matter that they all look different. They are dogs who have captured the hearts of many.