During News Report For Lost Dog, Family Gets A Completely Unexpected Reunion

The Cooper’s service dog Radar went missing for nearly four days, and the empty spot he left behind broke his family’s hearts. But while Jason Cooper spoke with Reporter Patrick Price with the LEX 18 news station about the pup, something miraculous happened. Sometimes that word “miraculous” is used as a bit of an exaggeration, and you might be a little hesitant to hear it—I assure you, this is not one of those times. As Jason peered over the land near his Kentucky home, he spotted a small yellow spot more than a half mile away. He hoped it was Radar, but was still afraid to be hopeful if it wasn’t their dog. “He’s completely part of our lives,” Jason had said, “and we just need him back.”

The reporter and the Coopers took off—hopping fences and clearing creeks—to reach whatever was waiting so far away. It was Radar, trapped behind a gate near the property. Cooper, breathless from the run, asked his dog, “Oh my God, where have you been?” While the family is overjoyed to have their boy back, he isn’t just their best friend. Radar had watched over the Coopers’ two daughters before they passed away from a terminal genetic disorder. Carolyn Cooper told LEX 18: “He’s one of the only souls who has the same memories and experience as we do.” And he’s the last living memory of their little girls Madeline and Sophia. The Coopers are overjoyed to have their dog back, and we’re happy just to have seen the reunion firsthand. 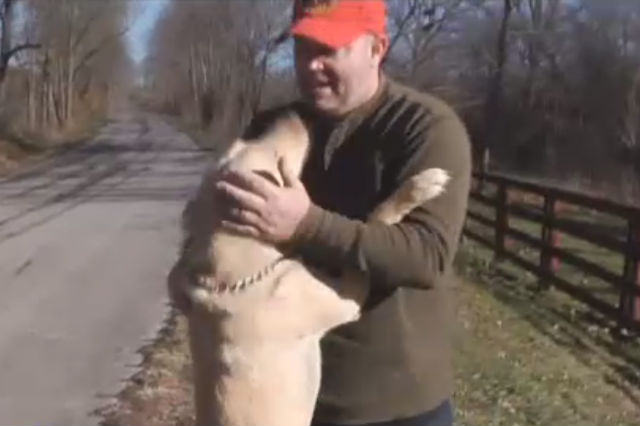 It was a miracle, there’s no doubt.