Fifty the Two-Legged Pit Bull first stole our hearts several years ago when his mom, Kelly Michael, converted his Facebook adoption page into a daily tracker of his wonderful exploits. Although the page had some critics (a few armchair veterinarians felt that Fifty should have been euthanized for his disability, despite the fact that he was happy and healthy), the majority of followers have been touched and uplifted by this brave boy and his ever-present smile. Fifty lost a front leg and a back leg after he was shot by a police officer – just for being a Pit Bull – which resulted in him being turned over to a shelter. He faced an uncertain future before destiny led him into Kelly’s arms. Instead of succumbing to his disability, Fifty has overcome the odds to become an inspiration to thousands, promoting rescue, adoption, and other dog-related causes. Just when you thought this story couldn’t get any sweeter, Fifty’s new foster puppy enters the picture. Her name is Jane and she was abandoned at Chicago’s Union Station and saved by a good Samaritan. Wee Jane not only looks like a mini-Fifty, she is crazy in love with her new foster bro! (The feeling is definitely mutual.) The pair has quickly become inseparable despite their ten-year age difference. Fifty displays the patience of a Buddhist monk when dealing with little Jane (whose favorite pastime is gnawing on Fifty’s distinguished grey jowls). 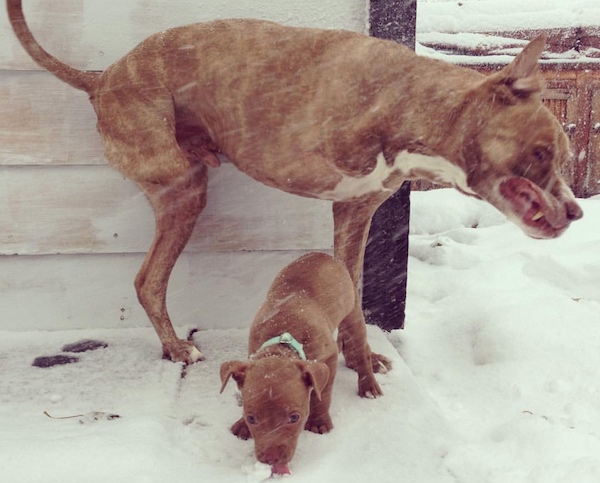 Can’t get enough of these two? Follow them on Facebook or Instagram to get a daily dose of overpowering adorableness! Also, if you’d like to help Kelly Michael continue to foster dogs like Jane, consider donating to her Foster Funds on YouCaring, which goes toward medical bills.

For those wondering, Kelly will NOT be keeping Jane. Jane, of course, will have an incredible life wherever she goes. She apparently already has a home lined up – with someone close to Kelly – and will be adopted in the new year. While it might seem sad that Fifty and Jane won’t be living together, this allows Kelly to keep on fostering and keep on saving lives, which is the most important thing. And fortunately, Jane will always be able to visit Fifty and chew on his jowls whenever possible, as she does below: