How A DogVacay Sitter Lost One Woman’s Service Dog

Ellie Lou is the type of dog who goes everywhere with me – planes, trains, and automobiles… you name it, she’s been there. I should probably mention that it’s because she’s my service dog, who I was given to help me after an extremely traumatic incident a few years back. She’s my rock, and every time I feel anxious or my brain takes me back to what happened, she’s always there. She works full-time, long hours, and never has a day off – and so I decided that Ellie needed a vacation, too.

San Marcos, Texas has been my home for the last six months or so. It’s the home of Texas State University, where Ellie and I have been attending for Journalism since last fall- about 2,000 miles away from home in Southern California. When Christmas time rolled around, I debated whether or not bringing Ellie home to California would be the best decision for her. I started thinking that maybe she would enjoy two weeks off from being a service dog. Maybe she would enjoy just being a real dog – the kind without vests, who get to play with other four-legged friends, dig in yards, and sniff butts. Selfishly, of course, I wanted to bring her home with me. We had never been apart for more than a few days, but I decided that the least I could do for Ellie was to give her two weeks of freedom.

I knew that I wanted something more than a dog boarder for Ellie Lou. I couldn’t stand the thought of her being locked in her own kennel during the day. I wanted her to be in someone’s home, preferably with other dogs, and have access to go potty via a doggy door at any time of the day.

I signed up for a company called DogVacay – kind of like the Airbnb for pups – and immediately found a couple that lived within a few blocks from us. They both had five-star reviews from other dog parents, had plenty of experience watching dogs, and assured me that Ellie would be well taken care of.

Before I left for home, we met on a Saturday afternoon at their home for a meet-and-greet. Ellie Lou got along great with their fur babies, and the couple explained to me that their dogs were so spoiled that they slept in bed with them.

I had found the perfect Ellie-sitters. Or so I thought.

As Christmas break began, I got frequent updates and photos right away for about the first six days. But then, the updates started to become a little less frequent, and response times started to decelerate. Then began the first of many excuses to justify the delay. 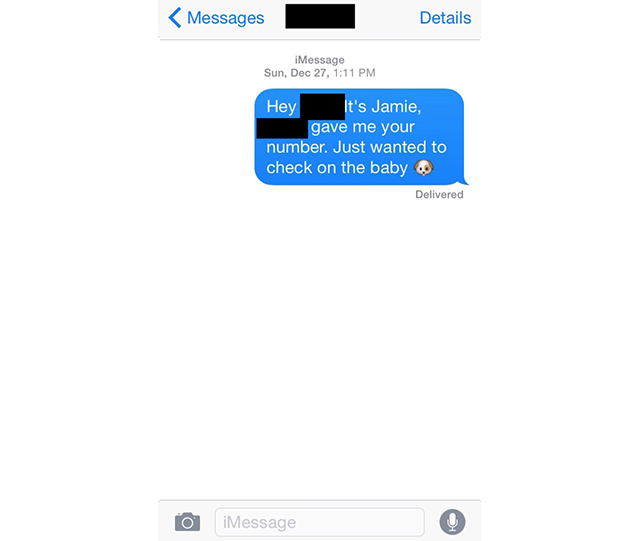 No response. I started to get a little worried. I tried not to think anything of it, considering it was the holidays. Surely with three dogs of their own, Ellie was in great care, so I tried to chalk it up to bad communication as a result of the family drama.

The night before I was ready to come get her, I called one of them to arrange pickup times. No answer.

Then my worst nightmare became reality: I got a text message from the sitters saying that they actually didn’t have Ellie, that she’d been missing, and that they weren’t sure for how long. I didn’t make it past the first line before I collapsed on the floor in hysterics.

Phone calls with the couple didn’t help. One partner refused to cooperate, claiming that it was no longer his responsibility and that we should “take it up with DogVacay.” The first partner then wouldn’t respond to texts, and each man blamed the other for losing the dog – each claiming to be unaware that the other had lost her. In fact, I don’t know was the general answer to the question I must have asked a million times: How long has she been gone?

That night, from Southern California, 2,000 miles away, I immediately switched my Facebook profile to ‘Public’ and launched the Hashtag #findellielou on Facebook, begging my community to help me find her. In 48 hours, the post had over 4,000 shares. People reached out to me from all corners of the country that had been following our story, and hundreds of people from the greater Austin area set out to find Ellie. 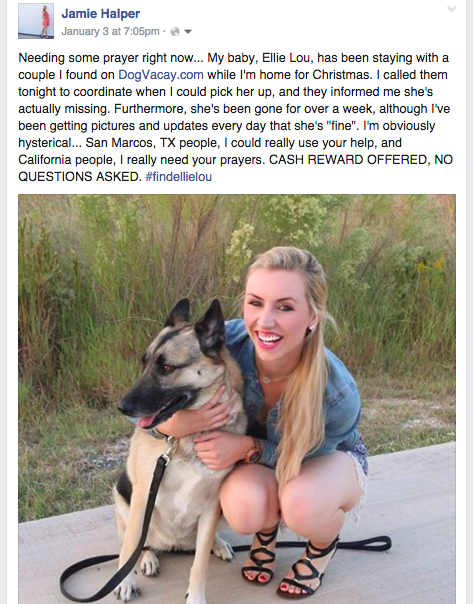 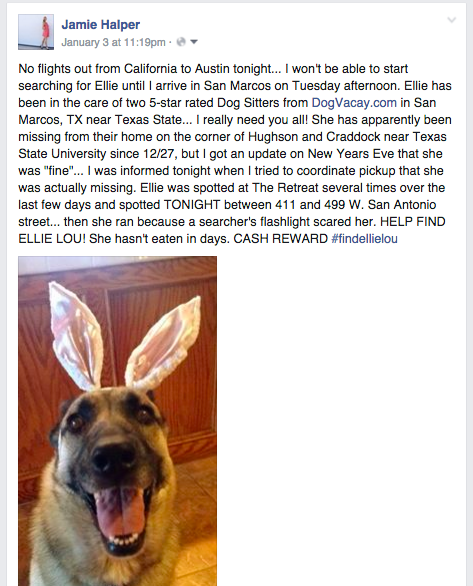 As it turned out, not only had she been missing, she’d been missing for over two weeks. According to a neighbor that tracked me down on Facebook, Ellie Lou had been missing since the night of 12/21.

And yet, on 12/23, I still hadn’t been informed, and as of 12/31, I was told she was “fine.” I couldn’t believe that anyone would lose an animal and not inform the owner right away. I thought surely that there must have been some mistake and tried to give the men the benefit of the doubt. How could they not tell me?

Not only did they lie to me, they also did nothing to find my Ellie Lou. She had been out roaming the woods in the middle of winter for two weeks with no food, water, or shelter. Not a single Lost Dog Craigslist ad or a flyer about town was posted, and I was finally informed that she was missing fifteen days after the fact on the eve our scheduled pick up.

Among the thousands of messages of support from people all over that were helping to find Ellie, a few messages came in from neighbors that knew the couple. Slowly, it became very clear to me that these men had a long history of domestic violence and that my Ellie had been exposed to it. Some neighbors explained to me that they could hear what happened the night that Ellie got out. Different sources reached out to me and told me that there was blood all over the couple’s home that night. Some claimed that the police knocked down the front door, which is how Ellie got out. Others maintained that the guys were fighting about losing her.

I’m not sure that I’ll ever get the real story, but I know one thing: a simple background check – which can cost as little as $5 – would have immediately revealed the couple’s past police reports and incidences of Domestic Violence. DogVacay, and companies of the like, do not require that hosts be screened to ensure that our beloved pets are in the right hands. Care.com, the Social platform for nannies and babysitters, requires driving history and background checks be on file, which must be paid for by the Nanny and costs around $10. But DogVacay doesn’t require them. In fact, out of curiosity, I signed up as a host and had a profile within seconds. Background checks are offered on the site, which earns a host a “badge”– but badges can also be earned by doing things like verifying a phone number or Facebook profile.

Ellie will have to return and re-do all of her service training because she’s now in survival mode. She will have to be reassured that no one is ever going to hurt her again. And on top of that, she lost a significant amount of weight. But she’ll be okay. We both will.

Thanks to Social Media, my wonderful community, and one heroic Dog + Dad team that found my Ellie, our story had a happy ending. But it could’ve just as easily gone the other way.

The whole experience has taught me that if I can’t take my dog with me, I’m only going to leave her with someone I trust. You would never let a stranger watch your human children – your fur children should be no different. As for us – we’re healing. And so thankful to have each other.