Today is National Dog Fighting Awareness Day.  This day means a great deal to me, because I share my home with dogs affected by the horrors of dogfighting.  Every day I am thankful that they are in my life, teaching me so much about canine behavior.  I think back to the days before I met my first Pit Bull Terrier-type dog, and I am amazed at how far my understanding of them has come.

Probably the most important thing I’ve learned, and the one thing I feel compelled to share, is that these are dogs, just dogs.  Not monsters.  Not mutated beasts waiting to attack.  Not ticking time-bombs.  Just dogs.  Dogs who have been severely abused by humans intent on deriving pleasure from suffering and pain.  Dogs who are the victims of a crime, not the implements. 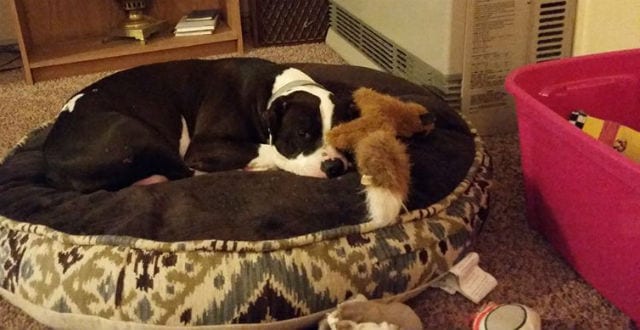 Three of our last four dogs have been touched by dogfighting. Ray was a Vicktory Dog, McCaela the Turtle was one of the Fearing Six fighting bust in Toledo, Ohio, and Bubba G. was found in an alley in Denver, covered in dogfighting wounds and left to die beside a dumpster. I have written extensively about Bubba and Ray, but somehow Turtle often ends up in the background.  And she shouldn’t.  Turtle is everything that is best about Pit Bull Terrier-type dogs.  She has three great loves in her life: her people, food, and naps. When my husband Kevin was critically ill last year, Turtle never left his side, and they formed an unbreakable bond. She is loyal, gentle and eager to please.  She is incredibly human-bonded.  She is an amazing companion. And her story deserves to be told. On January 31, 2013, police in Toledo, Ohio entered an abandoned building on Fearing Street as part of an ongoing drug investigation.  They found six Pit Bull Terrier-type dogs chained to the floor.  The dogs were severely underweight, scarred and caked with urine and feces.  Two of the dogs had legs that had been broken and never set. They were all full of parasites and were shy and timid with rescuers. The dogs were held at Lucas County Canine Care and Control while the legal case made its way through the court system. After 10 long months, their abuser, Carl Steward, was found guilty of five felony counts of dogfighting and sentenced to 18 months of incarceration and 5 years of probation. Jean Keating, Executive Director of the Lucas County Pit Crew, wanted to make sure the dogs had the best possible evaluation, so she asked Donna Reynolds and Tim Racer from the California-based organization BadRap to come to Ohio and assess the dogs.  After the assessments were completed, two of the dogs were determined to have been too damaged to be safe and were humanely euthanized.

That left four dogs.  Honeysuckle (renamed Joy) and Butterball (renamed Georgia after Vicktory Dog Georgia) both went into foster homes with the Lucas County Pit Crew.  Mopsy and McCaela both had more severe issues, and needed to be placed in specialized fosters or rescues who were equipped to deal with their problems.  Eventually, Mopsy was pulled by rescue…which left McCaela sitting alone at the shelter. Time was running out for McCaela.  The staff at the shelter started calling her Turtle because she loved to roll on her back for belly rubs, but couldn’t easily right herself afterwards.

It is unclear why Turtle was having so much trouble finding placement. She was sweet and submissive with humans, although she did appear to have some dog issues.  Maybe it was because she had funny googly eyes, or that one of her legs had been broken and never set properly, or that one ear was torn half away and the other ribbon-ed. Maybe it was because all of her front teeth had been broken off at the gumline (probably from trying to break through her chain).

In truth, it was probably because she was Babesia positive.  Babesia is a microscopic blood parasite that causes severe anemia. It is extremely expensive to treat and can be passed from dog to dog by bites. But whatever the reason, management at the Lucas County Animal Care and Control began to worry about Turtle’s quality of life. After more than a year of living in a shelter environment, Turtle was beginning to show signs of stress. If placement couldn’t be found soon, it might be kinder to end her suffering.

Vicktory Dog Oscar’s mom Rachel Johnson had been following the Fearing Six dogs since the beginning.  She had held an auction to raise funds for the dogs.  She worked to get the other Vicktory parents involved in the situation.  She took these dogs on as a project.

And it’s a good thing she did.  Because of her efforts, Jasmine’s House (a rescue established by Vicktory Dog Jasmine’s adopter) pulled Turtle and committed to finding her the perfect home. Although Jasmine’s House Rescue is located in Maryland, they have a satellite branch in Salt Lake City, Utah with Traci, mom to Vicktory Dog Halle.  Turtle was picked up at Animal Control and had a series of rides to get her to SLC.  There, she had a foster home that just didn’t work out, and she ended up being boarded at a vet’s for a few days.  Not a good situation for a dog like Turtle.  Jasmine’s House representative Kate went and walked Turtle twice a day, but she knew this was at best a temporary measure.

Ray and I were in South Dakota participating in a celebration to mark the end of breed discrimination in the state.  While we were busy at a gathering on the Capital steps, other Vicktory parents were working behind the scenes to get Turtle home. Handsome Dan’s mom Heather contacted my husband Kevin and asked if we could serve as an emergency foster for Turtle while other arrangements were looked for. Of course, we said yes.

The second Saturday of July in 2014, Kate and Traci drove Turtle to Kanab, and we all met at the sanctuary.  Kevin and I brought Ray along so we could determine if it was even feasible to bring Turtle to our house.  Then we all drove home and let Turtle explore our house and yard. 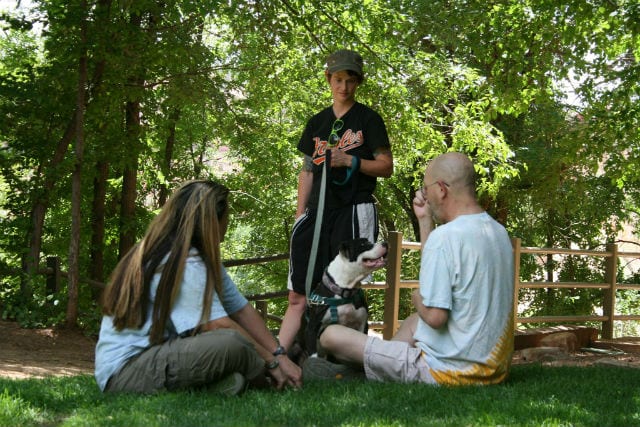 It took us less than 24 hours to decide that Turtle wasn’t an emergency foster….Turtle was home. We applied to adopt her on Monday morning.

Turtle and Ray were never able to interact.  They had both suffered too much trauma to be able to exist together.  Neither one had the dog skills necessary for them to build a relationship.  But that was okay.  Our house is divided in half, as is our yard. We were able to keep both dogs happy and socialized…just separately.

In the two years that Turtle has been home, she has blossomed.  She has figured out how to play with toys, she discovered a love for chuckit balls, and she has developed a relationship with our dog Bubba. She has an absolute adoration for my grandson, and can barely contain herself when he comes to visit.  She adores my husband, Kevin, and is never more than a few feet from his side.  Kevin calls her his “perfect dog,” and in many ways she is.  She loves with her whole being.  Her tail never, ever stops wagging. She is our beloved family member, and I can’t imagine life without her, nor would I want to. Turtle does have a few quirks that we have to deal with.  One is that she is highly food-motivated and is fixated on eating as fast as possible. This is probably due to her time of starvation, chained in the abandoned building.  We feed her in a puzzle bowl, which makes her slow down and savor her food.  It took her some time to realize that meals are regular and tasty in her new life with us. 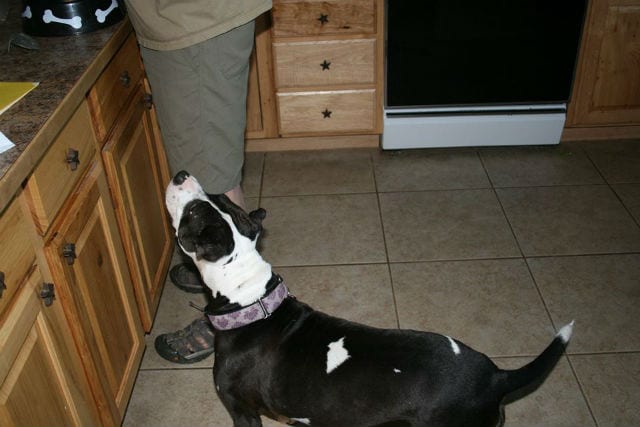 Turtle has become an “I’m Not a Monster” Ambassador and Christmas Elf.  The year before last, Kevin and Turtle got to deliver BarkBox donations to Best Friends Animal Society for the dogs who are waiting for forever homes of their own. Turtle is walking, breathing, tail-wagging proof that fighting dogs just need a chance to recover from their experiences.