Home » Fun » Why Foster Failing Is Actually A Huge Success

Why Foster Failing Is Actually A Huge Success

We are proud to spread awareness about the joy of fostering with our pals Best Friends Animal Society and Toast Meets World! Best Friends NY is looking for pawtential foster parents for pups in the tri-state area. Find out how you can help here!

Traditionally, the focus of being a foster parent to a pup in need is to provide temporary shelter and love until the dog finds his or her forever home. Occasionally, things don’t go as planned. This is usually called a Foster Fail, which has nothing to do with taking care of the dog! It usually means that you fell hopelessly in love, and there is no way you could imagine life without this pup! Below are some of my favorite Foster Fail stories from my amazing fans, which prove that sometimes love comes in unexpected forms! Gracie was called into Animal Control in the Houston area as a dead dog on the side of the road. When ACO arrived to “remove” the body, they discovered she was actually alive. Upon intake at the shelter, she weighed 31 lbs and was heartworm positive. A local rescue group posted her intake photo on their Facebook page on a Friday, which was her last day. Her humans had never considered fostering, even though they’d adopted their other two dogs, but Gracie’s haunting photo convinced them to contact the rescue group. Thankfully, the rescue agreed to pull her if Gracie’s humans would foster. She went home to them that Sunday so weak that she had to be carried to the car and out for potty breaks. Gracie needed to be fed 7-8 small meals a day to regain her strength and weight.

Today she weighs 70 pounds and is going through heartworm treatment. Gracie is now bossed around by her Dachshund sisters. Little cutie pie Sum had been bounced around from home to home due to aggression issues stemming from neglect. When he was set up with another foster home, this time through Social Tees NYC, Sum knew it was time to swipe right.

Sum and his new mom connected immediately and he is now a happy pup strolling around NYC cruising for belly rubs. “I really believe that Sum and I are soulmates, down to matching personalities and wild blonde hair.”

Sometimes they choose you: When @pigpenthepittie was placed into foster care through In Our Hands rescue, she was extremely underweight and had chewed her tail until it was dead. Her anxiety was extreme, but when she was in her foster home she felt comfort like never before and was not going to let anyone move her. During adoption events, PigPen would be extremely uncomfortable and fussy, but as soon as she was back in her foster home she would crawl right up on a lap and go to sleep. There was no denying it, this was her family. Four months later, her foster family caught on and made her adoption official, and they are the love of each other’s lives.

Family is forever…until you get old: This beautiful black Lab, named Raven, was brought to a shelter by her family at the age of 7, who were willing to take a chance that she might have to be put down due to overcrowding because “she’d had a good life.”

Luckily, staff at the shelter didn’t think it was Raven’s final act, and they put out a plea for a foster for this girl. Good thing for her, a family in the area that frequently fosters dogs had an opening. After a few meals, a bath, and some reassurance, Raven was a dream dog and became a permanent part of the family. There’s always time for a second chance!

When it’s your dog, you just know: Mollie the Puggle’s mom had fostered seven pups before Mollie was transferred from a high-kill shelter in West Virginia to upstate New York. After three weeks of fostering, her Mama knew that Mollie was part of her family, and they have been together for two years. Mollie recently moved to Colorado and is loving her mountain life and dog community.

There are still many pups who need loving humans to open their homes and hearts up to them while they wait for a furever family. If you’d like to help by fostering, here are some of the dogs available at Best Friends who would love a chance at having a normal life outside the shelter. Merry has a name that really fits her style! She is a happy girl who gets attached to her humans easily and loves to love. She is an active, intelligent lady who has learned basic commands and is ready to spread her joy to her forever family. 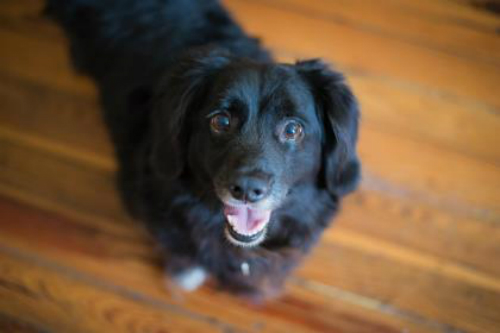 When Cookie first came to Best Friends, he was extremely overweight, as well and shy and nervous. But this handsome fellow has dropped about 10 pounds and blossomed into a charismatic character who loves to play fetch or tug-of-war with his squeaky toys. Cookie does well with most dogs, and would do best in a home without small children. This sweet-as-pie Shih Tzu mix enjoys the company of both humans and other dogs. You will constantly be entertained by his silly personality and striking good looks. Rocky has chronic dry eye and will need someone who can give him drops daily. Tyler is a big bundle of energy with lots of skills to boot! He already knows sit, down and give paw, and he is eager to learn more from his new, dedicated family. Since Tyler is still a puppy, he will need an active family who is committed to his training and helping reinforce his manners. Tyler will need a lot of physical and mental exercise to go along with all the love he deserves. Prince is a five-year-old male cocker spaniel who loves to give hugs and kisses. He can be a bit nervous, but his award-winning smile will make you swoon!

If you cannot foster, shelters and rescue groups need all kinds of helpers on every level, from donating or volunteering to raising awareness, there are countless ways you can help. Contact Best Friends Animal Society to find out how you can do your part to help make New York City the largest No-Kill City in the world.