A Collection Of 10 Absolutely Random Facts About Golden Retrievers

You may very well be obsessed with Golden Retrievers, but do you know all there is to know about them?

If not, you’re in luck – BuzzFeed recently produced a video called “10 Golden Retriever Facts That Will Make You Smile” that should shed some light on the subject (or, at the very least, make you smile). Check out all the facts below – we expanded on them a bit – and watch the video at the bottom of the page.

1. Golden Retrievers were developed in Scotland in the mid-1800s.

By crossing a Water Spaniel with an existing Retriever and then mixing the offspring with the Bloodhound, the St. John’s Water Dog, the Irish Setter, and more Retrievers, the Golden Retriever came to be. Apparently, you can never have too many Retrievers. This required a dog that could traverse both land and water, due to the numerous wetlands and rivers where hunting typically took place. 3. Golden Retrievers are known for being great swimmers and loving the water.

Maybe a little too much? 4. There’s a Kangaroo in Australia named Dusty who believes his “mum” is a Golden Retriever named Lilly.

“He’s always grooming her, they’re always together, and if Lilly goes out of the yard, he pines for her and sort of hops up and down the fence until he’s let out to go with her.” When Xena, an African Wild Dog at the Oklahoma City Zoo, gave birth to three puppies – one male and two females – she wasn’t all that interested in caring for them. Fortunately, the zoo’s animal care team stepped in and introduced them to Lilly, a Golden Retriever and recent mother. She took to the puppies instantly, nursing them alongside her own pups. 7. Charlie, a Golden Retriever from Australia, holds the Guinness World Record for loudest bark at 113.1 decibels.

For comparison, a chainsaw is 110 decibels, and chainsaws are really loud and annoying. 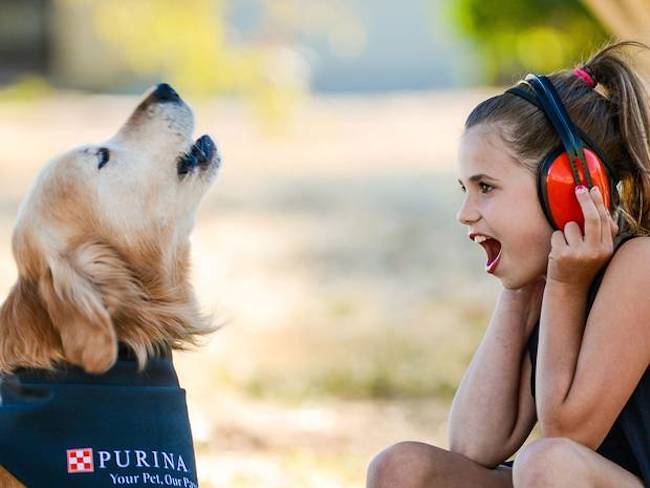 8. But “Loudest Bark Ever” isn’t the only world record held by a Goldie. He threw himself between the boy and the cougar and the two animals fought until a constable arrived and killed the cat. While it was initially believed that Angel had been mortally wounded in the attack, according to the boy’s mother, he eventually sucked in a “big breath of air and then got up [and] walked to Austin, sniffed him to make sure he was all right, then sat down.” He went on to make a full recovery.

Yes, I’m still crying. Let’s not make a big deal out of it, okay?

10. And finally, the Golden Retriever was the American Kennel Club‘s third most popular breed last year.