Home » Fun » Hero Cop Saves Puppy Abandoned In Traffic, Then Rescues Her All Over Again

Hero Cop Saves Puppy Abandoned In Traffic, Then Rescues Her All Over Again

Marley the puppy just went from rush-hour traffic to forever home thanks to Lieutenant Brian Rackow of the Midland Police Department in Texas. Last week, police responded to a call regarding a man throwing puppies into busy morning traffic, reports The Midland Reporter-Telegram. When authorities arrived, the man was gone, but the dogs were still stuck scurrying among the cars.

Police rounded up the pups and brought them to a local animal shelter, where they were found to be shaken but not seriously hurt. 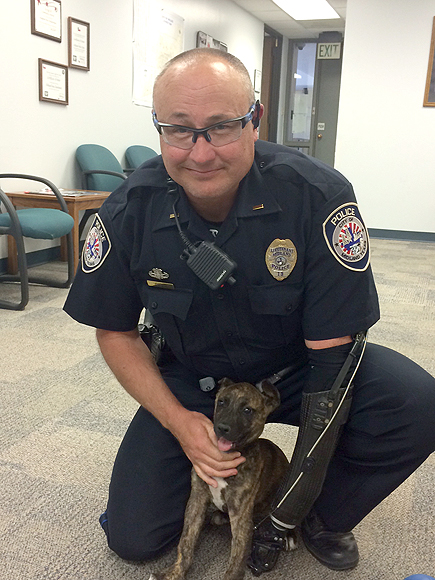 One of the puppies rescued from the road after being thrown under a car caught the attention of a member of Midland’s finest. Marley the puppy is now living under the loving protection of Lt. Rackow, who adopted the pup shortly after she arrived at the shelter.

Anxious to know more about your favorite pet celebs? View the hottest stories at PEOPLE Pets: Beauties Who Really, Really, Really Love Their Beasts, The Cutest Pets on Twitter This Week!, and Funny Pet Videos. It’s plain to see why they’re one of our favorites!