Dog toys designed for both hound and human? You bet. This list delivers toys that will provide hours of entertainment for both you and your pup. Whether you go with Andi’s Famous Plush Dumplings or Boxing Gloves for epic Instagram opportunities or you opt for the a plush Hillary Kitten, neither you or your tail-wagger will be disappointed here.

Take your pupster out to the ballgame with this plush peanut dog toy! He’ll be ready to take playtime into extra innings. What’s a ballgame without chomping on peanuts and stomping on the shells? Two squeaky toy peanuts are hidden inside, just waiting to be shelled. Watch your dog peel the soft shell off and go nuts! What’s better than a smiling hotdog? I mean, wieners make everyone happy, don’t they? With a plush outside and a squeaky inside, plus the a tug-of-war inducing rope, this is pretty much the pawfect toy for any drool-meister. With the This Means S’mores dog toy, you can bring the best part of camping to your couch! A Bark & Co Original, it’s made by sandwiching a thick and fuzzy plush marshmallow-and-chocolate squeaker (all squeaker, no stuffing) between two heavy canvas graham crackers. It’s definitely the chewiest S’more in town, and we didn’t even have to set any marshmallows on fire to make it! Did somebody say take out?! On the outside, this toy doesn’t look giggle-worthy, although it does look like it contains something delicious. On the inside, these tiny dumplings with hilarious faces will make you cackle the moment you open the box. And you’ll pawsitively squeal when you hear the little dumplings squeak. McGruff isn’t the only dog who stops crime. When this toy from Harry Barker breaks into your home, your pup can save the day. Turn petty theft into plenty of playtime, as your dog digs the squeaker and pulling ropes. Its black berber back makes for a soft snuggle, even when doing hard time. This pie-shaped dog toy is just begging to be snatched from the window sill. The folks at Loopies made this squeaky pastry exclusive for Bark & Co, and it’s hot out of the oven and ready for playtime! The pie crust is made with two layers: a soft plush exterior, and a nylon mesh underneath for extra durability. The Loopie Pie is filled with three removable cherries, each with a squeaker inside. Delish! Step up to the plate with this baseball bat dog toy, and swing for the fences! A Bark & Co. Original, we crafted the Pooeyville Slugger with a solid handle for superior grip at bat and a soft squeaky body for satisfying contact. This sturdy-and-soft combination makes it easy for humans and dogs to hold their own in games of tug-of-war. Hope you’re ready to fetch some home runs, because this toy makes every dog feel like Bark McGwire. The Hillary Kitten dog toy is destined for greatness. She’s one powerful plush who can withstand lots of badgering. Hillary’s a soft but tough DemoCat, with dog-minded pawlicies, a smartphone stitched in her front pocket, and a sturdy squeaker. A Bark & Co exclusive, complete with durable reinforced seams in her pantsuit, Hillary Kitten has come to bark the vote. When we were designing this toy, we asked ourselves, “What is the worst thing a ninja kitty could possibly do?” The consensus answer was “Squeak loudly.” This BarkMade toy packs a big ol’ squeaker into this silent-but-deadly ninja plush, and we’ve run rope through the legs for superior pull-ability. Playing with this ninja kitty will make your pup feel like Bruce Lee. This flannel dog toy is more than just a stuffed shirt. Cut from the hippest of fabrics by the folks at ABO, this shirt is sewn shut at all the seams and conventional openings to create a torso-shaped tug-of-war toy. The crunchy bottles inside create for dynamic play and unique sounds. It’s all wool, it’s tough enough for tugging back and forth, fetching, or just aimlessly flailing and thrashing. Hipster doggies will have their paws all over this! Put up your paws! These squeaking boxing gloves with rope have all the right features for training hard, puppy style! Even the Flabbiest of Frenchies can turn into Doggy Balboa! These pawsome boxing gloves are just the right gear to get ’em started. Fitted with squeakers and weighing in at 4.8 ounces, this toy is a real knockout! The Specter alien dog chew toy comes in peace, not pieces. Made by Swag Co, it’s covered in super-durable fabric that can survive the toughest of chewers. As you’d expect from a highly-advanced spacefaring civilization, the Specter Dog Toy is ready for any kind of weather. Rain or shine, land or water (it floats!), this chew toy is up to the challenge. Take it for a swim, a walk at the park, or just a lazy day in the living room; it’s great for games of tug-o-war and fetch wherever you go. Your pooch will love tugging on the long, dangly arms, and you’ll love the image of your pup flailing an alien dog toy through the air by its legs. It’ll make you laugh and your pup will be yappy too! We made the best part of a pretzel the only part: chewing! Your pup doesn’t need the extra calories from a normal pretzel so we’ve made this plush pretzel toy to satisfy those twisted-dough cravings. Carb-load away! Let you dawg chow down guilt-free with the Buns of Anarchy burger dog toy. Made by the folks at P.L.A.Y., this soft and squeaky multi-part sandwich is the perfect afternoon snack. Don’t try to amend your dog’s carnivorous habits; encourage them with this concession-stand favorite. Buns of Anarchy brings the ballpark right to your backyard, turns games of fetch into a feeding frenzy. You’ll never run out of TP on your next hike or camping adventure with this Pawty Training Roll dog toy. Made by Bark & Co (that’s us!), it’s perfect for when the Call of the Wild sounds a lot like the Call of Nature. Fun with or without treats inside, pups can unspool the ballistic nylon sheets of crinkle-stuffed TP to get to the plushie roll and the chewy core tube through the center. Pro-Tip: fill the core with peanut butter for some deeply uncomfortable photo opps that you can share on Fido’s Insta! Throw this baseball dog toy down the middle, and see if your pup can handle the high heat. Designed by Bark & Co, this fastball’s ballistic nylon flames are great for gripping, and the plush cover conceals a sturdy spiky squeaker ball. In a moment of hubris, we’re gonna call our shot: this toy is tough enough for your own Babe Woof. For all the mutts with pride for America, this ball is for you! The spiky Lady Liberty Ball is covered in durable plush fabric so your pup can fetch AND chew. The NSA is listening, so the answer had better be yes. Add a dash of patriotism to your games of fetch! A spiky ball covered in durable plush, we had this custom-made to withstand the perils of both dachshunds and democracy. 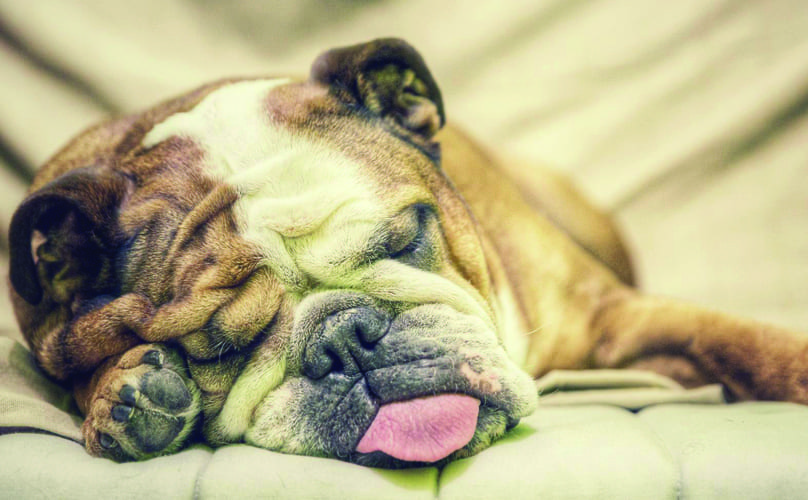 18 Products For The Lazy Dog That Loves To Nap Dog Days Of Summer Essentials For Pups And Their People How To Keep Your Pup’s Paws Safe All Year Long