We love inspiring stories of dog rescues and recoveries, and Kalila’s is no different. Kalila was one of many dogs rescued during the recent holiday season by A Place to Bark, a Tennessee-based no-kill animal shelter dedicated to saving homeless pets. When A Place to Bark took her in, she was in bad shape. Kalila was suffering from severe mange, dehydration, and multiple infections. Terrified and tired, she was also emaciated and full of parasites.

A Place to Bark’s founder, Bernie Berlin, took the below video one week before Christmas. It shows Kalila at Animal Control, just before A Place to Bark rescued her and began helping her rehabilitate.

This dog is Safe-Saved-Rescued!!!!The video posted is one of, the many dogs Saved over the holiday season. This is the…

Since her rescue, Kalila has undergone an astonishing transformation. Thanks to the good people at A Place to Bark, Kalila was provided with the medical care and love she needed. Incredibly, the below picture is the same dog that A Place to Bark rescued just weeks earlier. Kalila, who was once scared of people, is sweet and affectionate. She loves playing with toys, especially this reindeer.

Although Kalila still bears the scars from her past, all of her wounds have closed and she is focused on moving forward and embracing hew new life. Today, she is a happy and healthy dog, who has earned a new leash on life. She also earned herself her new name, Kalila, which means “Dearly Loved.” 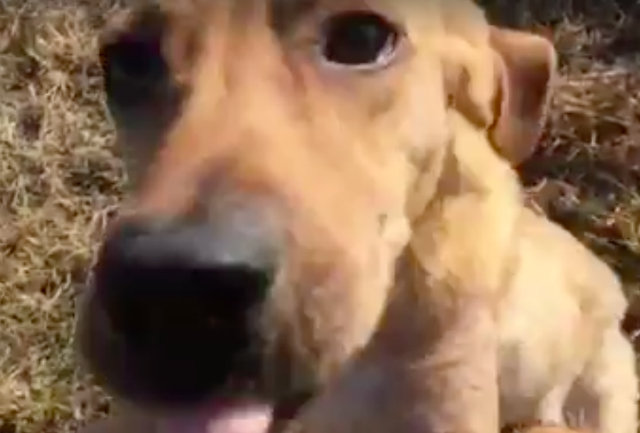 Just look at this goofball.

Bernie and the folks at A Place to Bark posted an inspiring update video of Kalila. The physical and personality changes that Kalila has enjoyed are truly astounding:

This is “Kalila’s” update!It’s been about a month now, that she has been in our care. As you can see in this video, she…

A Place to Bark is committed to rescuing homeless animals, providing medical care, and supporting all walks of life. To learn more about their amazing efforts, and to support their cause, visit their website and Facebook page.