A Behind-the-Scenes Peek at the *Obsessive* BarkBox Toy Workshop

In 2012 I moved from Indiana to New York City to join BarkBox as the third employee. In the last 6 years I’ve watched my company grow from 3 employees to over 400. I’ve done every job from answering phones, throwing events, authoring a book, editing a 15-million-visitors/month website, writing marketing emails, tending the bar at parties, and picking up puppy poop. (We get a lot of fosters around the office. And TBQH my dog, Pimm, is an anxiety-riddled maniac who is not to be trusted with an open floor plan.) Over the last 6 years I’ve watched the company grow from sourcing products to designing every. Single. Thing we put in the box each month. The toys, the treat bags, the paper, the tags on the toys, the squeakers in the toys, the doodles inside the box…

This emphasis on design, specifically toy design, has been one of the most fascinating things to watch as I’ve come to work each day. To me, toy design is one of those pipe dream careers like an astronaut or a marine biologist who rides dolphins… No one *actually* does it to make a living! o/

To better understand all of the magical things going on around me each day, I sat down with our team to dig into the process of blowing dogs’ minds with toys.

Back Up. What Is BarkBox?

Our flagship product, BarkBox, is a monthly delivery of 2 original toys, designed in-house, 2 full bags of all-natural treats, and a chew. Our treats are made in the USA & Canada with domestic and imported ingredients, and our recipes never contain any wheat, soy, or corn. Every month we ship out BarkBoxes to over 650,000 subscribers, for which our toy team designs an average of 13x unique plush toys for every month’s theme.

In *addition* to the monthly BarkBox subscription, we’ve now created unique lines of dog products for partners at Target, Urban Outfitters and many more.

But back to BarkBox. Every month, there is a new immersive, meticulously planned experience where we make your dog into the main character. They get to act out the part just by being their little doggo selves playing with the toys. Past themes this year have included:

The Grinch BarkBox was one of our biggest hits EVER. We partnered with Universal Studios to celebrate everybody’s favorite angry green dog person, in a box that featured real Grinch toys, presents for your dog, and a very special Max’s antler. Because even at your grumpiest, you can always count on your dog to be the Max in your life. Our Street Fair BarkBox celebrated a world’s worth of fabulous foods, from dumplings and burritos to falafel and meatballs. (Mama Mia!) 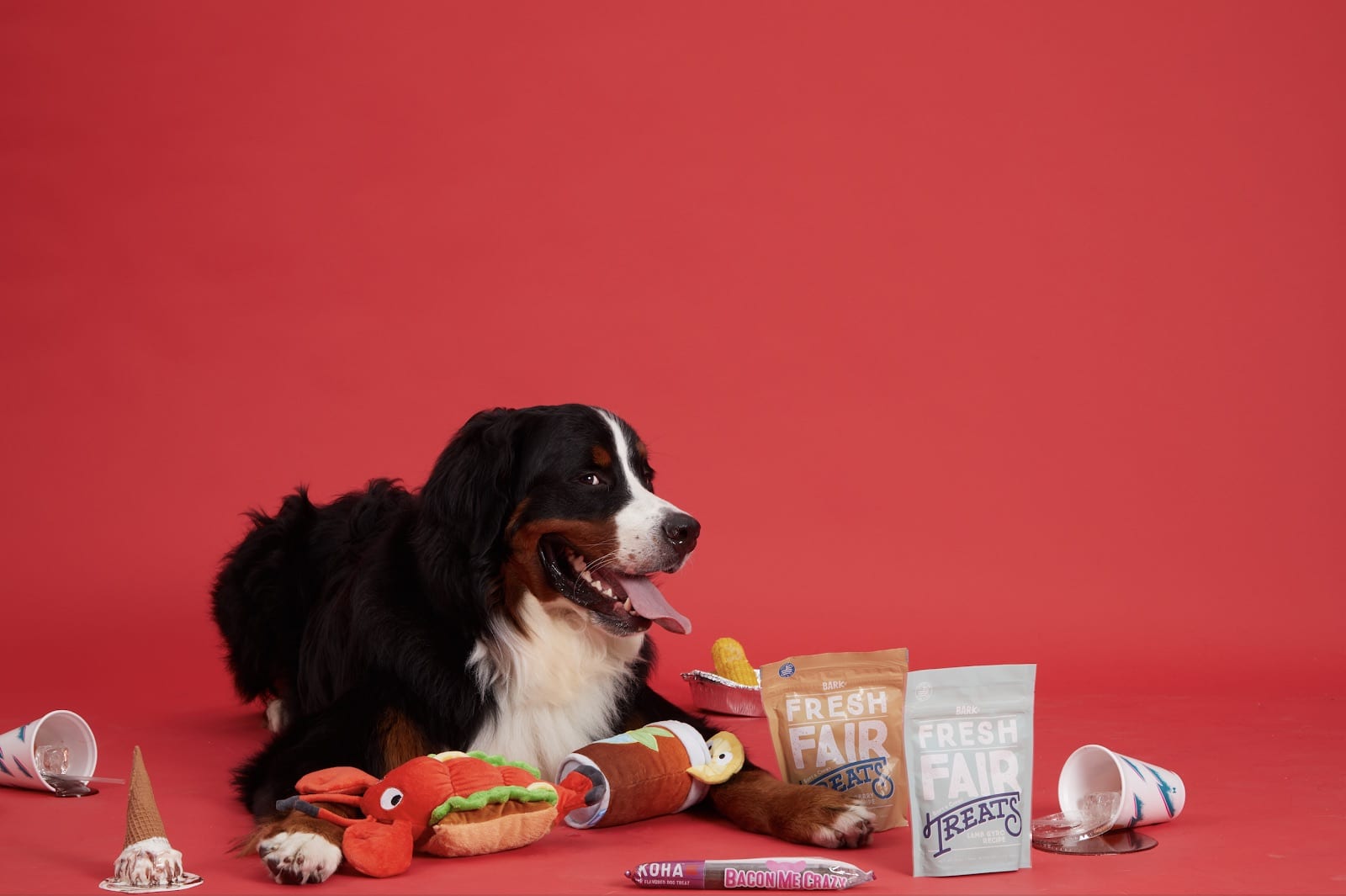 In our swashbuckling Pirates box, with feisty sea captains, fluffy parrots, and squirrel mermaids (we call them squirmaids.) Squeakhearts Under the Stars: The Prom BarkBox

In this box we had limousines, canoodling teens, and a grumpy champerone we call Mrs. Butts. So What Does the BarkBox Toy Design Team Look Like?

From developers to writers, there are many, many people involved in the monthly BarkBox creation. But over the past few years, the design arm of the company has been one of the fastest-growing teams. Here’s an overview of how the team is made up:

I sat down with our director of Toy Design, Rob Sayegh, to have him explain in detail the inner workings of a dog toy workshop. Rob’s background is in children’s toys where he has worked for clients like Hasbro, Disney Consumer Products, Fisher-Price, and many more. Rob also has two rescue dogs, Penny and Rigby.

How To Design A Dog Toy

“This is the most important thing of all,” Rob says. When you’re designing a dog toy, it’s incredibly important to remember that every single dog is different. We strive to serve every single dog based on their size, breed, and play style. Some dogs like crinkle toys, some dogs love squeaky toys. Some dogs want to play fetch until their paws fall off. Other dogs are extremely treat-focused so we need to design toys that incorporate treats. There’s a big range of dog preferences when it comes to toys and we want to make all of them happy. Each month we have many different variations of a BarkBox to do just that! #2. Listen to your customers, listen to the data.

Every month we get survey feedback directly from our customers on how their dog enjoyed the toys they received. We have an incredible BarkHappy team in Columbus, Ohio that interacts with thousands of customers every day to ensure that every BarkBox subscriber is happy. We also obsessively comb through the 150,000 uploads to #BarkBoxDay and the 3.3 million uploads to #BarkBox. All of this listening enables us to learn a ton from our customer each month, and our design team takes these learnings to heart for their future work. 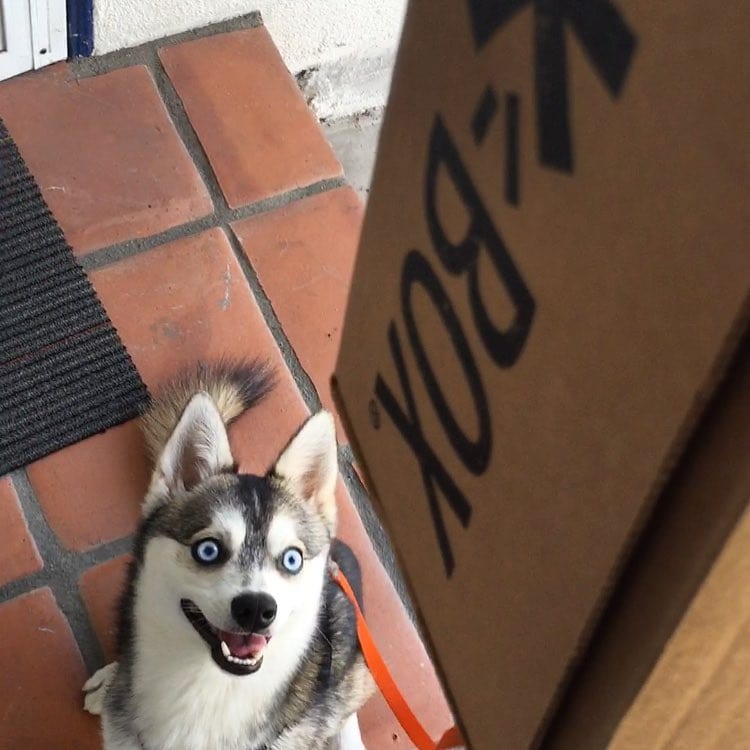 At BarkBox it’s not just about putting stuff in the box– we are all about creating an amazing experience from top to bottom that weaves the theme around the toys and treats. We can’t resist adding some hidden surprises in between, too. 😛

Because we’re not a pet company, but an over-the-moon dog-obsessed company, we have the ability to hyper focus both in our product design AND the overall experience.

Take for example, our Toxicritters BarkBox: 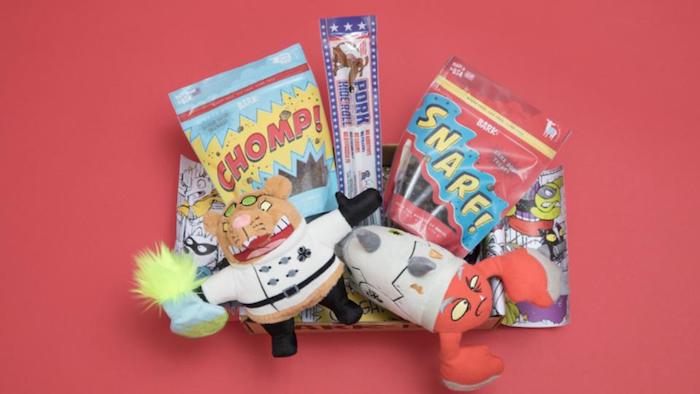 For this BarkBox, we leveraged the dog’s point-of-view to an all-new level by making all of the toys into super villains who invade your home. When your dog opens the BarkBox and attacks these super villains like Smell Raiser the skunk, Crab van Goon the crab, or Dr. Nibbler the rat, your dog is automatically a superhero saving your family from evil. But we didn’t stop at designing a series of funny villainous animals. We also villified the functions of the toys. Our Smell Raiser skunk toy has two stinkbomb squeakers that came out of his butt. The Shellacker is a flying turtle and when you toss her disc-shaped body in the air, it’s up to your dog to fetch the fiend! For the Toxicritters box, the info card was actually a comic book where you could pop out the cover and make your dog pose in the frame as the true hero who saved the day from those evil Toxicritters.

But that STILL wasn’t enough!
Rob and team also created a true archnemisis for all the BarkBox dogs, a monster SQUIRRELZILLA. [This toy came for all the dogs who subscribed to our “Extra Toy” plan!] 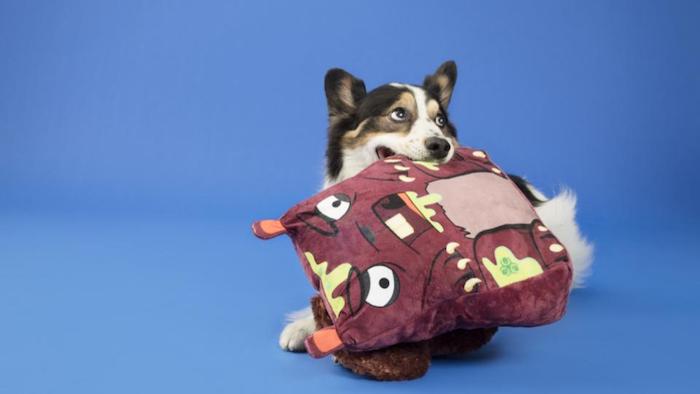 SQUIRRELZILLA was our largest toy to ever ship in a BarkBox. To make that happen, the design team had to get creative to deliver a different, strange, and completely surprising experience. A SQUIRRELZILLA is not a true SQUIRRELZILLA if it is a regular-sized toy inside the box. So Rob and his team started testing. How do you make something as big as possible while still fitting in the BarkBox wiht 2 toys, 2 treats, and a chew? After many iterations of prototypes, they finally figured out that you can vacuum seal a giant plush to make it smaller… But when your dog unwraps it, it’s like this evil swamp beast is coming to life as air fluffs out the plush. When SQUIRRELZILLA was released into the world, people took the story and told it *their* way with their pups as the main character. And that was just one month, just one box. We create an adventure for your dog *every* month. In our Secrets of the Rainfurrest box, we invited dogs to journey deep into the wilderness, to nibble exotic new treats and play with strange toys that have never been squeaked before! One of the toys in the Rainfurrest box was the “Mutta Morphing Butterfly,” a butterfly toy in the chrysalis stage. This toy is an example of what we like to call our “inception toys,” which are toys within toys. When your dog destroys one layer of the toy, there’s a whole new chapter of the story for the human and the dog gets another toy!

As we were concepting for the Rainfurrest box, the design team thought about what an adventure in the rainforest could look like from the dog’s perspective. The initial toy is a cocoon, but once the dog rips it open, the toy metamorphosizes into a beautiful, colorful butterfly with crinkle wings and a squeaky belly! Outside of our toys inside of toys, we also like to push the limits of what people expect from dog toys.

An example of this challenge is Karla the Color-Changing Chameleon. Here we wanted to keep playing with all the ways a dog could interact with the rainforest. What if a dog could change the color of a chameleon? We spent a good six months trying to find the right fabric with our sourcing partners to make a dog-safe chameleon toy where a dog’s mouth could change the color of the toy from blue to pink. The result? Pups were big fans. 🙂 As we continue to plan and design BarkBoxes for the future, we will push ourselves to think up the most ridiculous, most fun, most surprising dog stuff on earth. There’s one reason we’re all here– make dogs happy. <3 After all the grumbles and gripes and Monday morning growls our dogs have endured from us, dreaming up the most fun toys on earth is not really that much of a repayment for these creatures who’ve been our best buds for the last 30,000 years. <3 After all this, want to get your pup a BarkBox? Sign up here and receive a free extra toy every month. <– This deal is worth up to $120 in value if you sign up for a 12-month subscription! Plus you’ll get all the extra-special toys like Karla the Color-Changing Chameleon or SQUIRRELZILLA for free! 🙂