Hurricane Katrina struck New Orleans and her surrounding cities in August 2005. During the ensuing chaos many folks were forced to leave their pets behind in order to take advantage of emergency evacuation services. The circumstances made for a perfect storm of terror, confusion and dismay. Of the 15,500 animals rescued from the storm’s aftermath, only 15 – 20% have been reunited with their owners according to the Louisiana SPCA.

But out of the sadness, loss and wreckage stories of courage, hope and strength continue to inspire us. Among the best are these “tails” of miraculous reunions between brave pooches and their loving humans. This inseparable pair were featured on Modern Dog magazine shortly after the disaster struck. Dohnn Moret Williams considered his Cocker Spaniel Sebastian to be “his baby” and had no intention of leaving New Orleans without him. With his home neck deep in flood waters, Williams towed Sebastian on an air mattress to the nearest helicopter evacuation site. Having been informed that evac services were for humans only, Williams smuggled Sebastian onto the helicopter in a trash bag.

He, and several other survivors used the same trick to get their pets onto a bus headed to Houston, Texas. The bus was met in Houston by the local SPCA who relocated Sebastian and the other canine stowaways to the shelter until their owners could make living arrangements. Williams found shelter with his sister and was able to get Sebastian back quickly. Despite their terrifying ordeal, Williams and Sebastian were definitely among the lucky ones. 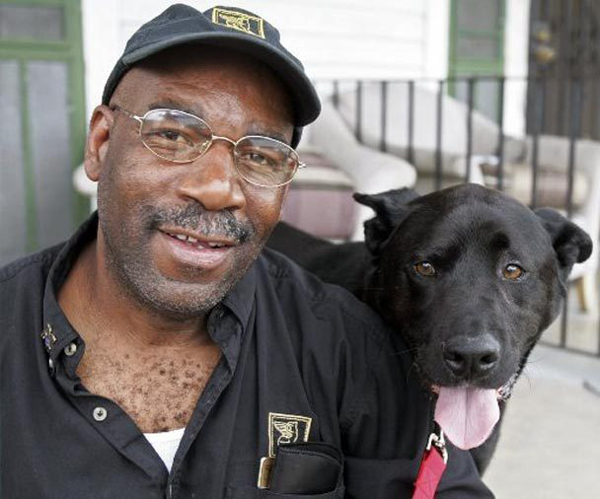 Although Jessie and JJ’s reunion ultimately had a happy ending, their story also showed the sad side of the efforts to bring Katrina dogs home. Today told the tale of how Jessie Pullins was forced to leave his beloved pal JJ behind in the chaos of the storm. Luckily, the black and white mixed breed was rescued, but Pullins would not discover his dog’s fate for nearly a year after Katrina. Meanwhile, JJ was cared for and rehomed by a shelter in California kind enough to take in several Katrina dogs.

A twist of fate led to Pullins’ discovery of his dog’s whereabouts when a rescue volunteer recognized JJ on a television show featuring Katrina dogs. A court battle lasting another year resulted in JJ’s adopters eventually agreeing to send JJ home to New Orleans. Pullins said JJ recognized him immediately and was overjoyed to be back with the man for which he was named: JJ is short for Jessie Jr. A lovely reunion for Pullins and JJ, but a sad loss for the California sisters who lost their pooch. Lionel Petrie had absolutely no intention of leaving his home, let alone his dog, eight days after the epic storm. John Lee Anderson, reporter for The New Yorker was accompanying a rescue worker on her search for survivors when they came across Petrie and Kita. The middle aged man and the massive Akita were standing on the second story porch of their home. Rescue worker, Shawn Alladio, was able to convince Petrie to evacuate, but gave him the devastating news that Kita could not join him.

Alladio was so moved by the man, his life story, and his adoration for his dog that she resolved herself to return to New Orleans and rescue Kita. She flew back to Louisiana the following week. Miraculously, Kita was still in Petrie’s home and safe. Alladio drove the dog to Baton Rouge for the joyful reunion seen above. Alladio tells her story in pictures on Flickr. In the days following Hurricane Katrina 8,500 animals were rescued and housed at the Lamar-Dixon Expo Center in Gonzales, Los Angeles. Viral Nova tells a survivor named Lemont’s miraculous story. Ten days after losing his home, Lemont was still worrying and waiting for news of his beloved dogs. He was overjoyed when he received a call from the L-D Expo Center. They informed him that they believed his dog Cleo was there. Lemont rushed from crate to crate in search of Cleo, finally seeing her on a leash with a rescue worker. Lemont tearfully embraced his ecstatic pooch.

He was concerned that she had lost weight and discussed Cleo’s condition with a volunteer. Just then, another miracle occurred. A second worker happened to walk by with two dogs on leashes, one of which turned out to be Lemont’s other dog! Watch the amazing video of Lemont’s happy ending here. Pablo the black Chihuahua mix was rescued from the flood waters near his Chalmette, Los Angeles home and taken to Arizona to be put up for adoption. Pablo’s owner, Paula Duming, stumbled across her missing pooch’s photo on an online adoption site after having given up on her beloved dog ever being found. WAFB News shared Paula’s story of her fight to bring Pablo home.

Paula was told by the shelter that she could not adopt Pablo back until she put up a fence at her new home. Unfortunately, by the time Duming built the fence, Pablo had been adopted by Lee Kotinas. Kotinas quickly bonded with Pablo, renaming him Boots. Neither woman could bear to part with the little pooch and a court case ensued to decide Pablo/Boots’ fate. Although the dog was clearly very loved, this story was yet another example of the enduring pain caused by Katrina’s wrath. Only one woman could win custody of Pablo/Boots, the other would have to mourn his loss. The judge ultimately decided in Duming’s favor and nineteen months after the terrible storm that separated them, Duming and Pablo were reunited. David Webster had been a volunteer with the Louisiana ASPCA since 2001. When Hurricane Katrina hit he at first refused to evacuate without his pets, two dogs named Tazz and Troubles, and a cat named Creech. Finally, on September 4 it was announced that all remaining residents must be evacuated. The toxic water flooding the city was far too dangerous, its effects unknown. Webster made the heart wrenching decision to secure his pets in a back room of his home with plenty of food and water and report for evacuation by helicopter. Webster put his faith and trust in the hands of rescue responders who were already working on a list of over 7,000 homes with animals needing rescue. After a terrifying five day wait, Webster received a call at his sister’s home that his pets were safe and sound at the Lamar-Dixon Expo Center. Webster rushed to the Center and searched through the rows of rescued pets. Finally, he saw two familiar faces peering out at him. Tazz and Troubles were still alive and still together! Relief and Joy soon turned to fear when Webster realized Creech was not yet accounted for.

A volunteer informed him that some pets were brought to LSU for treatment. Webster’s heart sunk even further when he arrived at LSU and saw only three cats, none of them Creech in the triage room. A technician then pointed Webster towards a cat in a carrier that he had walked right past: it was Creech! His family was once again whole, which meant more to Webster than anything else Katrina took from him. Webster is endlessly grateful to the first responders for braving the wreckage to save the beloved pets of a devastated city, and to the ASPCA for their care and shelter of the survivors.

h/t to The Louisiana ASPCA