**Editor’s Note: These are the posts we BarkPosters hate to write. We wish that cases this brutal and tragic didn’t exist, but as long as these horrific crimes continue to be perpetrated against animals, it is our responsibility to report on them. Some readers may find the details of this case too disturbing.

A 27-year-old man was sentenced this week for the vicious killing of his dog, Lucky. Arthur Viera addressed the court and said he doesn’t know why he acted out so brutally.

I just want to say I’m sorry. I can’t explain what I did. I’m so ashamed of what I did. Lucky’s body was discovered by firefighters on May 29, 2015. A microchip leading back to Lucky’s previous owner was located during a necropsy examination. The woman had rehomed Lucky to Viera through a Craigslist ad.

When questioned, Viera repeatedly lied to police saying he had given Lucky away through Craigslist and that she had run away. Viera’s last version of events stated that Lucky had been aggressive and he had hit her repeatedly to protect himself. He said he believed her to be dead when he ignited her body in a wooded area of Virginia Beach. The veterinarian who performed the necropsy on Lucky testified that this was yet another lie. Her examination found that the dog had been alive and standing with her legs and muzzle bound at the time of the fire. No evidence was identified to indicate that Lucky was beaten such as contusions or broken bones. Dr. Melissa McKendry testified that the dog would have experienced several minutes of intense pain before her death. 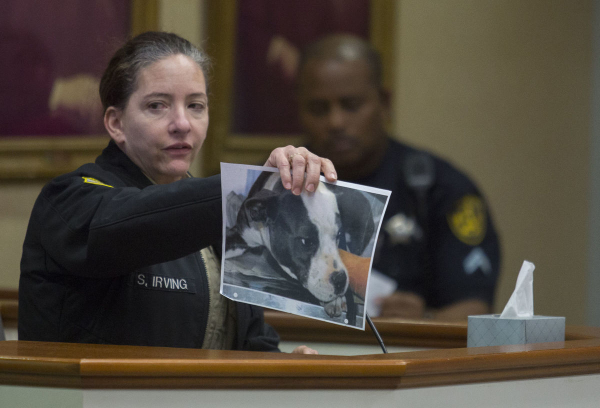 A psychiatrist spoke in Viera’s defense citing his ADD as a possible reason for his violent outburst. Viera’s mother also took the stand to tell the jury about her son’s positive relationship with his childhood German Shepherd. Prior to the attack on Lucky, Viera had no criminal convictions and was a former Navy gunner’s mate. Circuit Judge Steven Frucci was apparently not moved by the defense witnesses’ testimony or Viera’s apology. He handed down 90 days each for the 2 misdemeanors – obstructing justice and improperly disposing of an animal’s body. On the felony charge of animal torture Viera was given the maximum sentence of 5 years. Judge Frucci referred to the violence against Lucky as “scary” and added:

The degree of anger he had to get to to do something like this – I can’t wrap my head around it.

The prosecutor on the case, David Laird was quoted as saying:

Lucky was a living being with emotions, personality, feelings. Not a piece of property. How would you rate this in the category of cruelty to animals? It’s hard to imagine how this could be worse.

The case has inspired outrage and action from the public since the incident occurred last Spring. An online petition on care2.com demanded that Viera be prosecuted to the full extent of the law and had more than 4,000 electronic signatures from all over the world at the time of the sentencing. Representatives from PETA stood outside the courthouse to await the decision holding signs printed with Lucky’s photo. Cases involving cruelty toward animals rightfully draw widespread anger from the community, often extending to the professionals charged with handling the proceedings. Viera’s defense lawyer has been practicing law for nearly 40 years and has defended child molesters, pornographers and brutal murderers. He told The Virginian Pilot that he has received more hate mail related to his role in this case than at any other time in his career.

To learn more about preventing animal cruelty, or to make a donation to help stop these vicious crimes, visit aspca.org.

H/T to The Virginian-Pilot