Five years ago, a badly infected and malnourished mother dog approached Michael Baines’s restaurant. The Scotland native had been living in Thailand nine years, surrounding by hundreds of the country’s strays—but on that day and every day after, he began to feed her.

“And that’s how it all started,” he told Newsner. “And then it just kept going. I simply could not stand to see dogs in distress.” 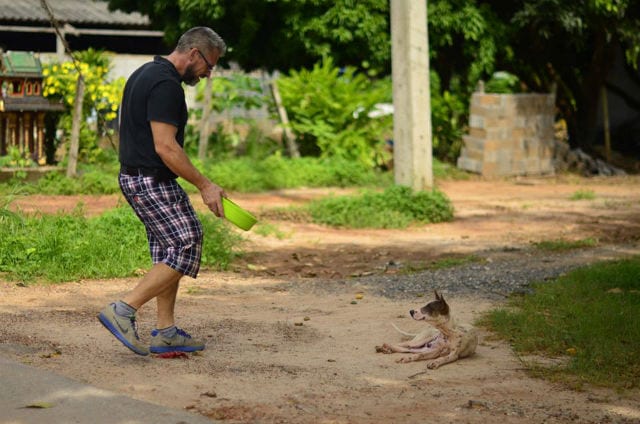 Baines feeds roughly eighty street dogs per day in Thailand with a mixture of dry dog food, white rice, steamed fish, chicken, oil, and a homemade broth. Stopping three times daily to bring them food is no small chore, and the cost of his selflessness comes to roughly $1,000 per month.

Often Baines is partially funded through donations from individuals in the U.S., Sweden, Thailand, and Australia, but he still pays quite a bit out of pocket. He says:

I pass them every day to and from work while I walk my own dogs, who were all street dogs as well. I just can’t look at them and do nothing. It is certainly not an easy pill to swallow. Baines has far more supporters than those who are opposed to what he does, but “they are very, very few.” He reminds us that it is not the dogs who are the issue, but the people who are not responsible—and do not take full responsibility for—the dogs they own. Many purchase puppies because they’re cute, only to abandon them when they become “too big” or are no longer wanted. These animals are not spayed or neutered, and so the problem of overpopulation is hurt further by puppies born frequently on the streets.

I think markets and shops that sell puppies should be shut down completely. People who want a dog should head to the street, or shelters. I have a bunch that need a home—and these dogs are free. In the years since the mother dog arrived at his restaurant, Baines has helped 100 dogs get sterilized and around 40–50 find loving homes. He hopes that nearby areas will eventually offer free spay and neuter procedures and do more than they are for their strays, but it is simply too expensive.

Still, he keeps a large container of food in his car at all times just in case he sees a dog wandering by.

It is a nice “job” but sometimes very emotional and frustrating, as you see many dogs that is [sic] in very bad shape. I do this from my heart and the payment is to meet these lovely dogs and feel their love. That is priceless and worthwhile. And, he adds, “Even if I cannot save them all, I think: for just that single dog I helped—I did [make] a change.”

Meet Michael, The man that rescues dogs. 14 years ago, Michael J. Baines left his home to go to Thailand and work in a restaurant. While at work one day, a street dog came by. She’d just had puppies, and was badly infected and very thin. Michael’s heart broke for her, and so he began to feed her every day.“That’s how it all started… I just can’t stand seeing dogs in distress,” Michael tells Newsner.

Help Michael continue caring for Thailand’s strays by donating via his GoGetFunding campaign. You can also check out the trailer for his upcoming documentary, The Man That Rescues Dogs.

h/t The Animal Bible/Facebook, featured image via The man that rescues dogs/Facebook