Home » Fun » No, That’s Not A Second Head Growing Out Of A Pit Bull – It’s Her Chihuahua Best Friend

No, That’s Not A Second Head Growing Out Of A Pit Bull – It’s Her Chihuahua Best Friend

The photo above has been circulated online repeatedly over the past few years – and for good reason! It shows a remarkably devoted pair of mismatched pups adopted together from a California rescue. It’s adorable, heartwarming, and for some, shrouded in mystery. Here is the REAL story of Merrill and Taco’s unbreakable bond. Towards the end of 2014, a female Pit Bull and a male Chihuahua were surrendered together to San Francisco’s Rocket Dog Rescue. Merrill the Pit Bull was suffering from a dangerous uterine infection and had to undergo lifesaving surgery. During her recovery rescuers were floored by the attentive dedication of Merrill’s little Chihuahua companion, Taco. He stuck by Merrill’s side like a tiny toothless nursemaid. Despite their obvious size difference and the fact that Taco is a senior male while Merrill is a young adult female, these two have a bond like nothing the folks at RDR had ever seen before. It was decided that although bonded pairs are more difficult to adopt out, these two simply had to stay together. The duo was fostered by a wonderful volunteer named Jodi, and then adopted by a loving family in San Jose. 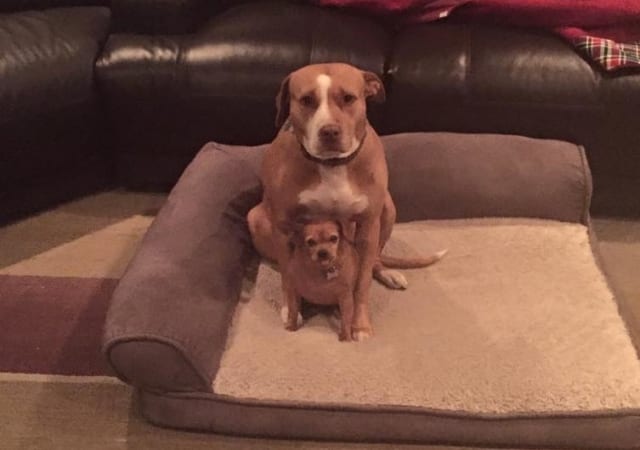 Veterinarians determined that Merrill was about 3 years old and had been bred at least once. She was likely surrendered to RDR because of the costly, life-threatening uterine infection, and possibly for the fact that she could no longer be used for breeding.

Little Taco was an even greater mystery. Determined to be about 8 years old at the time of his surrender, he was known to suffer from asthma and dental disease. He only has about 4 teeth, leaving his little tongue to flap out.

After about a month with his new family, they decided to have him evaluated. The news was not good. Taco’s vet suspected that he was in heart failure. His heart was enlarged and there was fluid surrounding his lungs. The family feared the worst, but hoped for the best as Taco was put on different medications and scheduled to see a specialist.

Miraculously, Taco’s condition improved immensely with treatment! He still has respiratory issues, but his heart is no longer a problem. Taco takes steroids to help with the condition in his lungs and requires anti-seizure meds, but he doesn’t let his medical problems keep him from living life to the fullest. He may only be about a fourth the size of Merrill, but he manages to keep up with her antics – in his own special way, of course. Taco loves to be carried by his hooman children. While Merrill romps through the grass, Taco joins in by hitching a ride with one of his child siblings. As long as these two BFFs are together, they are happy. If ever they are separated, they cry for one another until they are reunited. Having a loving family to depend on has not weakened this odd couple’s incredible bond, it has simply allowed them to open their hearts even wider to include their human rescuers.

There are many more heartwarming photos and videos of Merrill and Taco’s wonderful lives with their adoptive family on their Facebook page.