Abandoned Dog Miraculously Survives Being Clubbed, Hit By A Car And Buried Alive

A little over a month ago, Theia, a mixed bully breed, was hit by a car. The accident resulted in a dislocated jaw and other injuries. No one knows exactly what happened to her next.

What we do know, is that the story gets even more tragic. She found her way to a farm, and in a supposed attempt to euthanize her and save her from suffering any further, she was hit in the head with a hammer. She was then placed in a box and buried in a ditch.

But no one knew that Theia had a strong will to live. She dug her way out of her would-be grave and was found wandering on the farm. A farmhand rushed her to the vet. The blow to the head caused more damage to the poor pup, resulting in a caved in sinus cavity. Now Theia has difficulty breathing and can barely open her mouth.

This horrific tale took a positive turn after Sarah Mellado brought the ailing pup into her home, after Theia was treated at the Washington State University’s Veterinary Teaching Hospital. “I’m assuming that the person who [hit her] meant to put her out of her misery, but I’m still horrified by the carelessness of the act.”

Mellado and her family are doing everything they can to keep Theia as comfortable as possible. That’s a difficult task with all of the pup’s injuries. 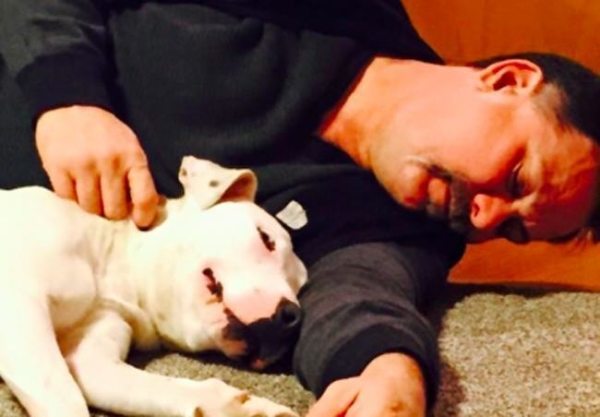 Theia requires extensive surgeries to repair her injuries. Mellado has started a GoFundMe campaign to offset the costs. As of today, people have donated nearly $26,000 to the pup who has captured all of our hearts.

Despite her pain and difficult past, Theia’s spirit is still full of love and a desire to persevere. High paws to everyone who’s helped this precious pooch get the love and care she needs.